Residents in Schuylkill County are reporting clown sightings, but it's no laughing matter.

Chief Richard Wojciechowsky of the Pottsville Bureau of Police told one local news station that two men in the area's Greenwood Hill neighborhood were spotted around 7 p.m. Monday yelling at children and then speeding away in a car.

No suspects have been apprehended, but concerned parents speculated that the incident forced a local school district to close activities, though the Mahanoy City Police Department was quick to dispell any rumors Tuesday. 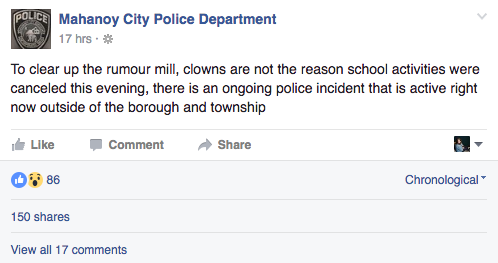 The alleged sightings come months after initial reports, which have since captured national attention, poured out of the South. In those reports, children told adults that groups of clowns tried to lure them into the woods.

Sightings have been reported in South Carolina, North Carolina and Kentucky, while one child reportedly received threatening Facebook messages from a group called "Flomo Klowns," which led to the lockdowns of two Alabama schools.

Not all reports have been substantiated, however. In fact, some have been boiled down to mere hoaxes.

Police in Annapolis, Maryland, said that four children who initially reported seeing threatening clowns later said that they made up the story.