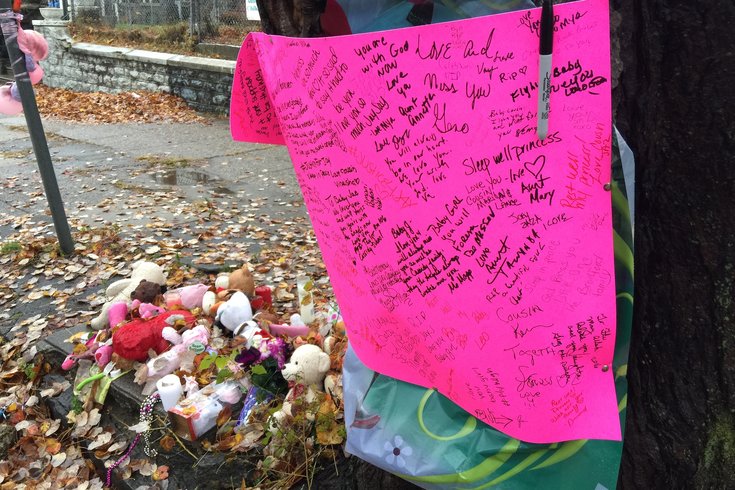 A memorial to 8-year-old Jayanna Powell, who was struck by a hit-and-run driver on November 18, 2016.

Less than four weeks ago, Ayeshia Poole rushed to the intersection of 63rd Street and Lansdowne Avenue in West Philadelphia, where she saw things no parent should see.

Medics were frantically working to save the life of her 8-year-old daughter Jayanna after she’d been struck by a hit-and-run vehicle on the walk home from Lewis C. Cassidy elementary school at around 3:15 p.m. on November 18.

The driver who fled the scene, 24-year-old Paul Woodlyn, would be arrested about two weeks later, after a tipster pointed investigators to the Chester County body shop where the car had been taken.

Today, Jayanna’s mother remains on a mission for justice, safety and comfort.

As for the latter, the family will host a Christmas Drive at Tustin Playground, 5091 W. Columbia Ave., where well-wishers can bring toys for Jayanna’s siblings.

“We want families to come out and have fun,” Ayeshia told PhillyVoice of the event that will run from 1 to 5 p.m. on Saturday. “We just ask that they bring a wrapped gift, or some clothes, so (Jayanna’s siblings) have something to open on Christmas.”

“Every morning, there’s no crossing guard or police or anybody there. It’s just kids still crossing that busy street without anybody looking out for them." – Ayeshia Poole, on the intersection where her 8-year-old daughter was killed by a hit-and-run driver

When it comes to justice, she said the family is still pushing police to file charges against Woodlyn’s girlfriend, to whom the Nissan sedan was registered.

While police said that Woodlyn confessed to being alone in the car when the incident occurred, Ayeshia’s son Hassan – who was holding Jayanna’s hand as they crossed the street that day – reported that he saw a young woman and infant inside the vehicle at the time.

The grieving mother continues to believe that the woman helped conceal the crime that haunts her family.

“He had to tell (her) what happened. Even if she wasn’t in the car, she’s an accessory after the fact,” Ayeshia maintained. “(They) didn’t take the car to South Philly or West Philly or North Philly. They took it to Chester (County) and said they hit a deer. My daughter’s an animal to them?

“She’s a mother, a human being, how can she not face up to what she did. Be a woman and face up to it. She needs to serve some time.”

Investigators offered no indication of whether that would happen. 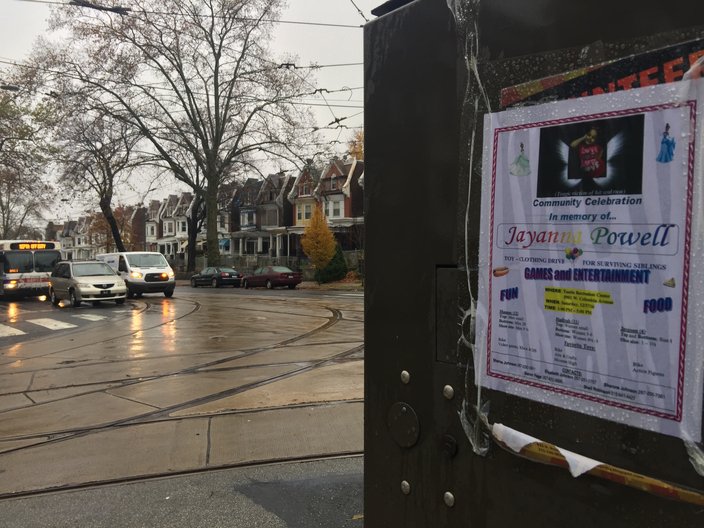 The intersection of 63rd Street and Lansdowne Avenue in West Philadelphia, where Jayanna Powell, 8, was struck and killed by a hit-and-run driver. Flyers were circulated in the area before the alleged driver was arrested by police.

While she hasn’t scheduled a date for it yet, Ayeshia said that issue will be the focus of a walk that she’ll organize from the school to the intersection where her daughter was struck.

That won’t be the only matter at hand.

As she’s driven her three children to Cassidy for school in the days since tragedy struck, she said she didn't see a crossing guard assigned to the intersection.

“Every morning, there’s no crossing guard or police or anybody there. It’s just kids still crossing that busy street without anybody looking out for them,” said Poole.

Poole claims the regular crossing guard wasn’t at his post on the morning of the hit-and-run. Since they were a little early, she figured he’d arrive later and be there in the afternoon, but she contends he didn’t.

“The Monday afterwards, there was a woman (crossing guard) there, but she said it was only temporary, that it’s not her regular assignment,” Ayeshia shared.

“How about all the kids who still have to school? You’re just saying forget about them. A child lost her life. Another was hit, too, my son. But, it seems like nobody cares about these little kids," she continued. “God forbid the principal has to run from the school to something tragic like that one more time."

For their part, Philadelphia police said that a crossing guard is assigned to the corner. The 19th District captain told her Tuesday that he would be looking into why it's been seemingly unguarded. He quickly responded with a plan of action.

"Yes, there is supposed to be somebody out there every day," she shared. "I was told to contact police every time nobody's there" so they can get someone to the corner quickly.

The school is about two blocks from the intersection where Jayanna was struck, and crossing guards are stationed at corners in between.