The drug, used a elephant tranquilizer, is known as 'gray death'

A synthetic narcotic commonly used as a tranquilizing agent for elephants, horse and other large animals was found in a Chester County overdose victim, according to the Chester County officials.

Carfentanil, a drug that can be lethal to humans in amounts less than one milligram, appeared in western Pennsylvania earlier this year before making its way east. It recently has been found in overdose victims in the Philadelphia area.

In the first reported incident of carfentanil in Chester County, the drug was found in the body of a 34-year-old man who overdosed on July 4 on Second Avenue in Phoenixville, officials said.

Phoenixville police later organized a sting to arrest Damon Alfred Eskridge, 20, who is accused of providing the drugs to the victim.

Carfentanil, also known as "gray death," often causes nearly instantaneous cardiovascular collapse and death. It is often disguised as heroin or mixed with the opiate, according to Chester County Coroner Dr. Gordon Eck.

"Carfentanil is incredibly dangerous because it is 10,000 times more powerful than heroin and 100 times more powerful than fentanyl," Eck said in a statement. "Because of the drug's potency and its ability to be absorbed through the skin, only properly trained and equipped professionals should handle any substance suspected to contain carfentanil."

It can be absorbed through the skin or accidentally inhaled, making it particularly dangerous to first responders and medical personnel. Naloxone, a drug used to reverse opioid overdoses, has limited effectiveness against carfentanil.

"Think of a couple of grains of salt," Chester County District Attorney Thomas Hogan said in a statement. "That is the amount of carfentanil that can kill a drug user looking for a new high or a police officer unlucky enough to accidentally ingest the drug."

Last week, a firefighter and three members of the Newtown Ambulance Squad in Bucks County were hospitalized after exposure to carfentanil on a call for a cardiac arrest. 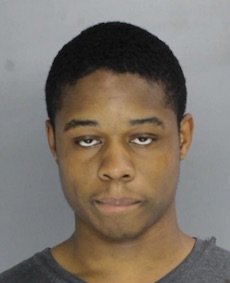 Eskridge, of Railroad Street in Phoenixville, was charged with drug delivery resulting in death, possession with the intent to deliver, criminal use of a communication facility, dealing in proceeds of unlawful activity and related charges.

Police first arrested him on July 5 after determining the overdose victim had purchased heroin from a contact known as "Kevin D," according to an affidavit of probable cause. Police found text messages on the victim's phone organizing a July 1 drug purchase.

Using the victim's cell phone, police arranged for the contact to deliver a bundle of heroin – 12 bags – at the corner of St. Mary's and South streets in Phoenixville.

Eskridge was taken into custody after being found in possession of 18 "New Arrival" heroin bags – identical to those found in the victim's home – as he arrived to allegedly complete the deal, officials said. He was charged and released on bail.

Eskridge was arrested again after an autopsy conducted by the Chester County Coroner's Office determined the overdose victim died by acute carfentanil toxicity. They added the charge of drug delivery resulting in death, which carries a maximum sentence of 20 to 40 years in prison.

Anyone with additional information is asked to contact Phoenixville police officer Anthony Duchnosky at 610-933-8801.