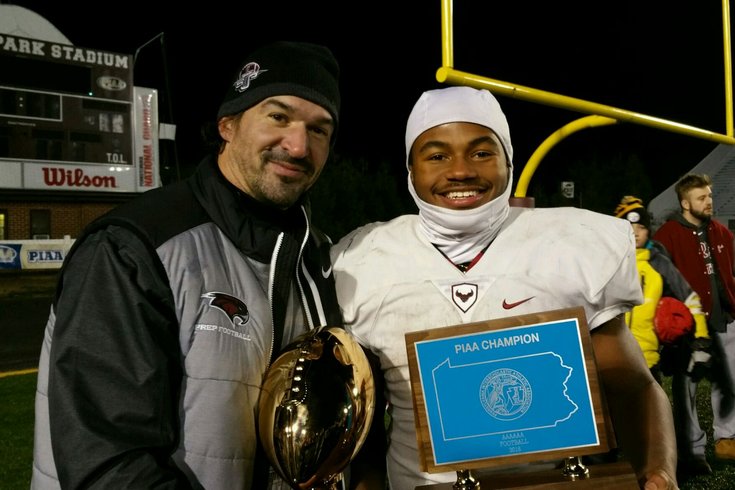 HERSHEY, Pa. – No one wanted to leave the field. They just swirled around like a human tornado around the trophy with the golden ball, the eye of their joy on successive nights, not feeling a hint of the sub-freezing temperatures at all.

Winning can have a great warming effect.

It did for St. Joseph’s Prep and Archbishop Wood this weekend at Hersheypark Stadium, proving their continued dominance in the state of Pennsylvania in football, even under the new 6A state high school sports classification system.

Imhotep Charter’s bid to win consecutive state titles was thwarted by a late fourth-quarter, 18-point rally from Erie Cathedral Prep, in losing the 4A final, 27-20, on Thursday night.

There’s nothing subtle in the way D’Andre Swift runs. It’s explosive, powerful and emphatic. The 5-foot-10, 210-pound senior tailback is like a high school Barry Sanders. He’ll lower his head and run right through you, as he did any Central Catholic defender that had the misfortune in finding out Saturday night. Swift has also been a nightmare to each of the opposing coaches he’s faced in state title games.

In the Hawks’ three championships, Swift has rushed for 434 yards on 56 carries, and eight touchdowns, including the 140 yards on 23 carries and three TDs he scored against Central Catholic on Saturday night. His stats average out to 7.75 yards a carry in state title games, including 2.6 touchdowns.

What is the saying about stars in big games?

Swift almost literally carried the Prep program to its first 14-0 season in school history on his churning legs, rushing for 724 in the Hawks last three state playoff games.

“I’m happy to go out this way, especially for the seniors on this team,” said Swift, who will most likely be Pennsylvania’s 6A Player of the Year. “All of the coaches put their trust into us, and we never had doubts. I liked the fact that the coaches trusted me with the ball in my hands. I wanted the ball. I wanted to make a play every time I touched the ball. For me personally, this program has changed my life in the four years that I’ve been here.

“I found a brotherhood here at Prep for a lifetime. The school taught me the value of a good education. What we did here this season, and in the last four years is something no other Prep team has done before, and to be honest, I’m really glad to be a part of that. This is something that I’ll never forget.”

And something Hawks’ coach Gabe Infante never doubted. Infante would play the Eagles if he were allowed to schedule them, and each season he’s been at Prep he’s loaded the Hawks’ slate with the toughest teams he could find nationally. The dividends have been three state championships in four years.

“I have to admit that this one was definitely sweeter than the others because it’s been an amazing group of players, coaches and parents, to start all the way in California and to end it here,” said Infante, his voice horse. “This has been an unbelievable group. But you never know until the end what you have. We did some things this year that were pretty outstanding, beating Don Bosco Prep for the first time, traveling out to California and winning there.

“We were loose at practice this week, but we were focused and then you can see their determination. We killed ourselves this whole year with some of the things that we did, and we still won. And this is how scary I think this team is: I still don’t think we played our best game yet.”

Someone in the PIAA might have had suspicions it was coming, though: In the state championship program a typo was made making Prep 14-0 even before the game was played. 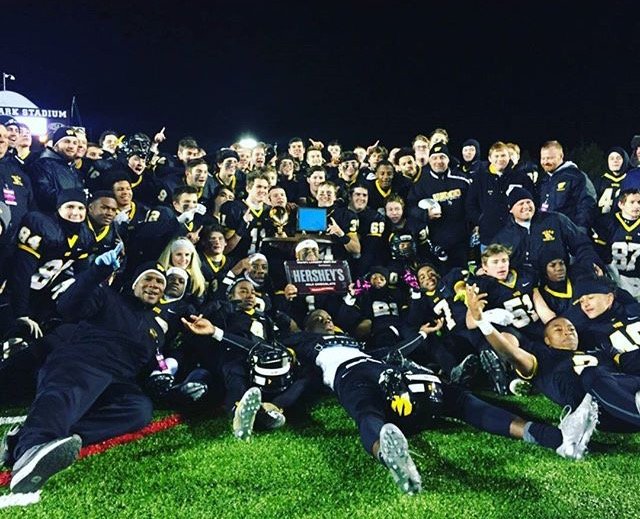 The Archbishop Wood football celebrates after winning the 5A championship Friday night.

Wood finds a way in remarkable rebound
to take 5A title, 37-10, over Harrisburg

Archbishop Wood was sitting at 0-2-1 at the start of the season and it was a strange feeling that overcame Vikings’ coach Steve Devlin.

“To be honest, I knew then that we could win the state title,” admitted Devlin, who’s been the most successful coach in the area the last 10 years. “The kids deserve a lot of credit. We knew we had some growing pains to go through. We lost a Division I quarterback, we had a young offensive line, a sophomore quarterback and one of the toughest schedules you can have, playing three of the top teams in the country.

“Losing those games and what we learned from them is the reason why we were standing there with that trophy Friday night. I started to think we could win the state title when we were 0-2-1. I knew then that we had a chance to be good. We played teams like Bergen Catholic and St. Joe’s Prep. The mistakes that we made were correctable. I never doubted the way the kids worked and they kept at it.”

Whoever the new Temple coach is going to be, he should thank outgoing coach Matt Rhule for securing Wood tailback Raheem Blackshear, who tore through a Harrisburg team (11-4) that had one of the best defensive ends in the country, junior Penn State commit Micah Parsons. The Vikings (11-2-1) made him irrelevant, running traps, jet sweeps and delayed draws that allowed Blackshear to finish with a game-high 236 yards rushing and three touchdowns.

The difference came up front, where Wood brought the smallest offensive line it had to a state title game. That didn’t prevent Tom Walsh, Matt Arcidiacono, Anthony Diodato, Connor Bishop, and Al Glasgow from making gaping holes for the Wood rushing attack. Walsh and Glasgow are juniors, and Bishop is a sophomore.

“After the first couple of games this year, we had to get on a run and find our confidence,” Walsh said. “No one thought we could beat Harrisburg because they were big and athletic, and tough to move. We had confidence we could beat them. Everyone on the o-line was playing great. Harrisburg’s defensive line kept coming up field, and we had a great game plan from the coaches to take advantage of that. They were getting frustrated because they couldn’t do anything to stop us. But they didn’t adjust to anything, either.” 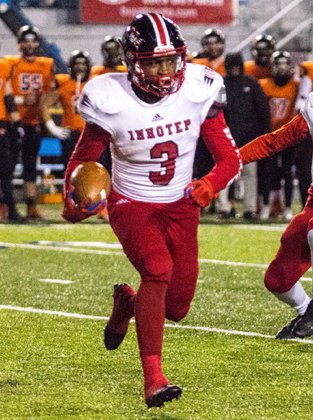 They wore a collectively stunned look. The players from Imhotep Charter didn’t think losing was possible this year. And it seemed apparent that the Panthers (13-1) were headed for a second-straight state title when the bottom fell out and Cathedral Prep (14-0) scored 18 unanswered points in the fourth quarter to come away a 27-20 winner.

Cathedral Prep’s Anthony Lupo nailed a 35-yard field goal, which was followed up Terry Roberts’ 34-yard pick six (and ensuing two-point conversion), which was followed by Tyler Oedekoven hauling in a 63-yard touchdown pass from Joe Mischler all in a span of just under four minutes.

“It hurts not to see these kids win, especially in the fourth quarter being up 20-9,” Panthers’ coach Mark Schmidt said. “Then all of a sudden, everything changed and we saw some big plays against happen that normally didn’t, and then we were in a situation that we just weren’t familiar with. It didn’t work out.

“It doesn’t mean we didn’t have a successful season. We underwent a sudden change in the coaching situation, and these kids handled it well. I care about these kids. They need to realize that they did some really good things this year, and take away a couple of really big plays and one or two calls and the gold ball goes back down there.”