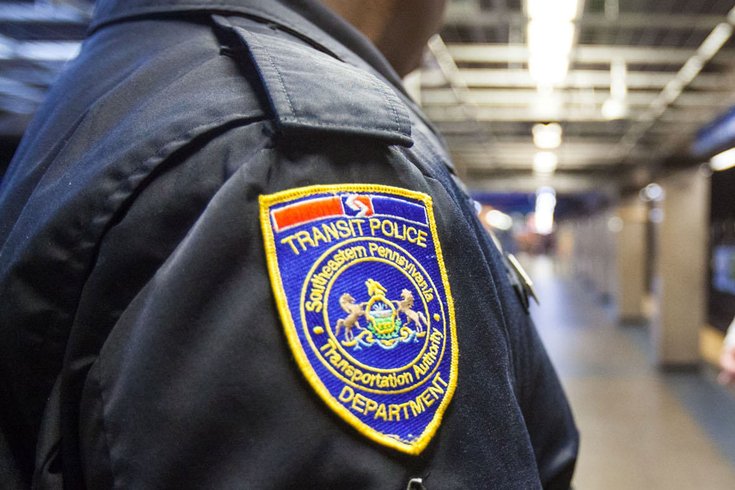 More than 50 percent of all the reported crime on the SEPTA system occurs along the endpoints of the Market-Frankford Line.

Read More
Jose Lopez has never had an incident riding on the Market-Frankford Line, but the North Philadelphia resident said he is taking no chances.
He remains attentive. He avoids riding the elevated train at night. And he carries a gun.
“At nighttime, the train can be pretty dangerous,” said Lopez, who has witnessed cell phone theft on the El. “I’d rather take a bus than the train.”
Lopez is just one of hundreds of thousands of SEPTA passengers. And like Lopez, the vast majority ride without incident. Violent crime is rare.
Still, the perception of a crime-ridden subway system in Philadelphia persists, despite statistics that reveal SEPTA’s subway and elevated train lines — the agency’s busiest routes, by far — are becoming safer.
Crime has dropped precipitously since 2012, when it peaked at 541 incidents, a figure mostly attributed to cell phone thefts. It fell in six of SEPTA’s seven transit districts last year, dropping to 390 incidents.
The declining crime rate coincides with a new data-driven policing strategy adopted by SEPTA two years ago. The strategy uses crime data to better deploy the agency's 275 officers, emphasizing crime hotspots and hot times for criminal activity.
“Previously, officers were distributed evenly throughout the system and evenly throughout the day,” said SEPTA Police Chief Thomas J. Nestel III, who took the helm in 2012. “We now focus our deployment strategy on places where crime is occurring — or predicted to occur — and during the times when crime is predicted to occur.” 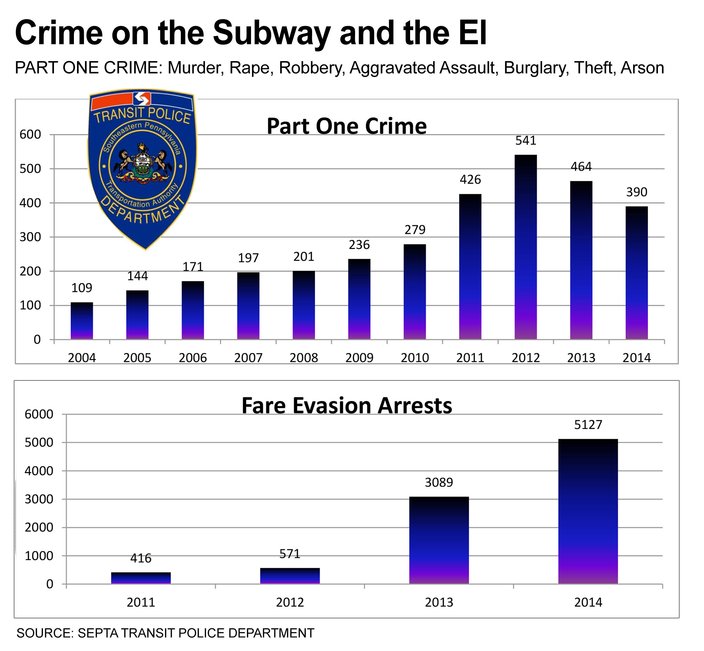 The bulk of crime on SEPTA’s system occurs along the endpoints of the Market-Frankford Line. Those stretches — Districts One and Four — accounted for 52 percent of the system’s reported crime in 2014.
District Four, which stretches from Huntingdon Station to the Frankford Transportation Center, has been the agency’s most crime-ridden district for at least four years. It reported 126 incidents last year, including 112 thefts. Both marked an increase from 2013.
District One, which spans 69th Street Station to 46th Street Station, reported 77 incidents, including 69 thefts. Both total crimes and thefts have decreased there since 2012.
Those two districts include six of the eight SEPTA locations that reported at least 22 criminal offenses last year — 69th Street Terminal, Huntingdon Station, Tioga Station, Church Station, Arrott Transportation Center and the Frankford Transportation Center Bus Loop. The other two stops are 15th Street Station on the Market-Frankford Line and Erie Station on the Broad Street Line.
Theft remains the most common subway system crime, even among the more dangerous SEPTA locations.
“When it comes to violent crime, the transit system is really low,” Nestel said. “It’s our job to let people know that. It’s also our job to market our success. When something does happen, we make an arrest.”
Last year, SEPTA nabbed several thieves responsible for stealing cell phones, the most notorious subway crime.
Nestel cites cell phone theft as the primary reason SEPTA’s crime figures began skyrocketing in 2009, noting the agency began adding cell phone service to its subway system that year. Riders using smartphones quickly became an easy target for thieves.
The thieves typically snatch the property and exit the train as the doors close, Nestel said, leaving the victim helplessly traveling en route to the next station.
“It happens while you’re on the train, just before the doors close,” Nestel said. “They’ve already scoped you out.”
Decreases in theft and robbery are driving SEPTA’s diminishing crime figures. Robberies fell by nearly 50 percent to 45 incidents last year. Theft dropped by 6.4 percent to 335 incidents. The agency also reported eight aggravated assaults and two arson cases.
These crimes are classified as Part One offenses along with burglary, homicide, rape and vehicle thefts. SEPTA only has reported 14 of the latter four offenses during the last 14 years. Thirteen of them were burglaries. The other was a vehicle theft. 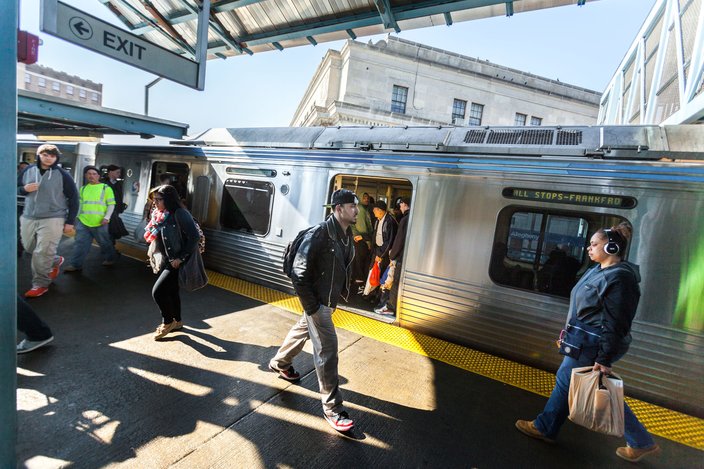 Nestel said he understands that crime statistics ebb and flow, noting some criminologists argue that policing strategies have minimal impact on crime reduction.
But he also knows that crime began falling around the same time SEPTA launched its Data-Driven Decision Making (D3) program two years ago.
The program uses reported crime, customer complaints and operator information, among other data, to determine how SEPTA deploys its police officers. The program, which included input from a study conducted by Temple University, identifies hotspots and popular times for criminal activity.
As a result, Nestel said, SEPTA has doubled its officers deployed to District Four, which previously had the same number as the other districts. The agency has used data to better patrol the trains, regularly using both uniformed and plain-clothed officers. It also has bolstered its staff during hours when crime peaks, and better utilized its camera system.
“Our use of cameras became more significant,” Nestel said. “We started really using the cameras as soon as a call came in. We would shift the camera to be the 12th man on the field.”
Jerry Ratcliffe, the director of Temple University’s Center for Security and Crime Science, commended the agency for better patrolling the areas around SEPTA stops, collaborating with Philadelphia Police and clamping down on fare evasion.
“Crime is not random,” said Ratcliffe, who has helped SEPTA identify hotspots. “Even in the subway stations, there are hot places and hot times. Chief Nestel is a good street cop, but he’s also a well-informed, smart cop. He knows the value of data.”
SEPTA made 5,127 arrests for fare evasion last year. That figure marks a staggering jump from 2012, when only 571 arrests were made.
“If we can address that potential criminal at the point of entry and terminate his or her plan to engage in more serious crime,” Nestel said. “The theory is we’ll reduce Part One crime, the major offenses.” 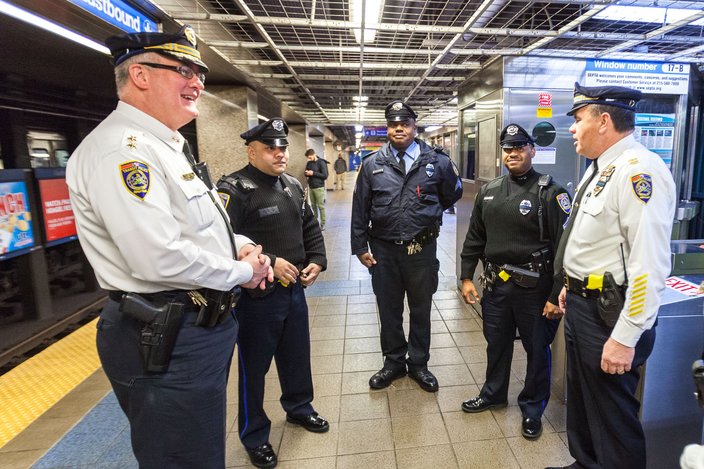 ‘NOTHING TO WORRY ABOUT’

Daily ridership averaged 191,308 on the Market-Frankord Line last year, easily the heaviest travelled SEPTA route. The Broad Street Subway Line averaged another 124,945 riders.
Not all of them feel unsafe.
Brad Lenox, who lives in Rittenhouse, uses a variety of SEPTA transit systems each week, including the regional rail lines.
“With regional rail, I feel it’s well-staffed,” Lenox said while standing on the platform of the Girard Avenue elevated train stop. “There’s a lot of support. I feel the same way with the subway and the El, too. When you’re on the train, there’s nothing to worry about.”
As the crime statistics revealed, that's increasingly the case.