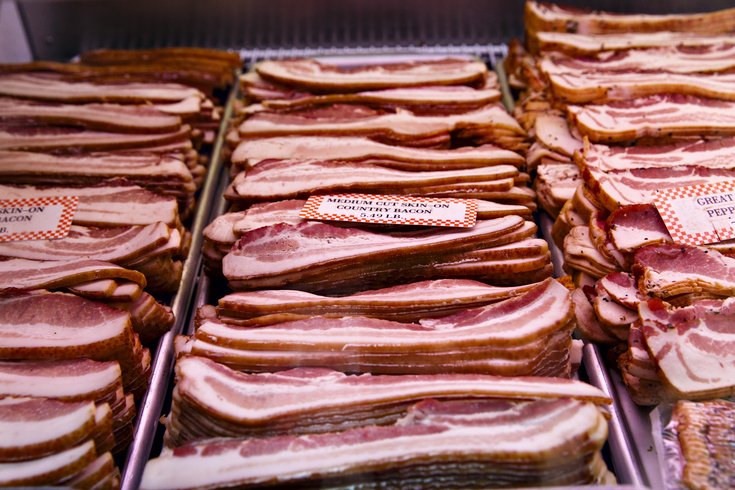 Sliced bacon is displayed for sale at a market in Washington, Thursday, April 24, 2014.

U.S. pork belly prices are likely to fall further into the summer as supplies climb, now that farmers have finally controlled a deadly virus that wiped out millions of pigs, analysts said.

The U.S. Department of Agriculture (USDA) expects pork production in 2015 to hit a record 24.09 million pounds as cases of Porcine Epidemic Diarrhea virus (PEDv) wane, triggering an accompanying fall in prices. Hog slaughter and pork output both jumped over 11 percent for the week ending March 28 versus last year.

Increased production should help keep pork belly prices at an average $99 per hundredweight (cwt) during July to September, the height of the bacon-lettuce-tomato-sandwich season, compared with $154.45 a year ago, according to independent market analyst Bob Brown.

PEDv killed at least 8 million pigs in the past two years, roughly 10 percent of the U.S. hog population. But tight biosecurity measures are paying off and incidences of the virus have eased.

"We got a handle on PEDv at the baby pig level," Brown said.

To counter losses from the virus farmers have been feeding hogs to heavier weights, which is adding to pressure on pork belly and sausage trimming prices. In February, the average carcass basis hog was $61.82 per cwt, a 6-year low, the USDA said.

Those lower belly and trimmings prices are making breakfast favorites like bacon and smoked pork sausage cheaper. USDA retail price data for February showed bacon dropped 12 cents per pound from January to $5.47. In June 2014 it reached a record $6.11.