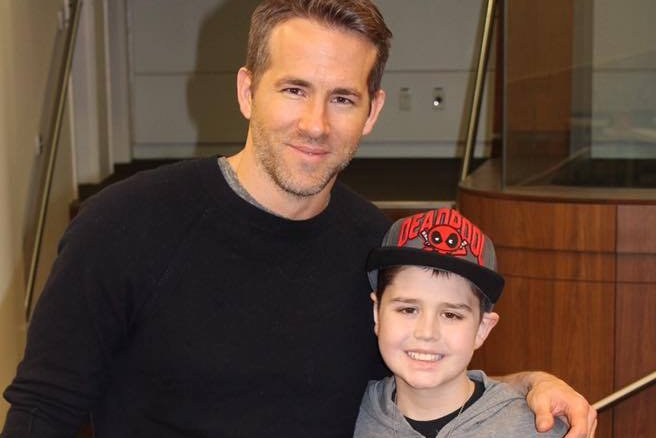 Foul-mouthed Marvel superhero Deadpool got his powers from an experimental cancer treatment. So it's perfectly appropriate that the star of the new "Deadpool" movie is raising money for his 13-year-old friend to get experimental treatment at the Children's Hospital of Philadelphia.

Young Connor McGrath is "quite possibly the biggest Deadpool fan on Earth," actor Ryan Reynolds wrote on Facebook earlier this week. Like the character, Connor is "the funniest, potty-mouthed Canadian mercenary I've ever met."

He also was diagnosed with a high-risk form of leukemia in the summer of 2013, and his cancer has persisted despite years of aggressive chemotherapy. Connor's parents now want to raise $800,000 to send him to the Children's Hospital of Philadelphia for a promising experimental treatment known as T-cell therapy.

"He's my friend," wrote Reynolds. "I know lots of celebrities jump up and down touting a cause — and maybe I'm no different. But holy frozen s***-slivers, I love this kid. He's the GREATEST. And he needs your help to get well. I've donated to help Connor and I hope you will too."

The therapy is a feat of biological engineering, used only for patients whose blood cancer has relapsed after chemotherapy. Doctors transform a patient's T cells, which attack disease, so that they latch onto leukemia cells and destroy them. In one experiment, 27 out of 30 patients went into remission at least temporarily.

According to Connor's crowdfunding page, his doctors in Canada applied for local funding to take him to CHOP — but the money was denied because the therapy is experimental.

Reynolds took to Facebook to encourage his fans to donate to the cause. He also revealed that Connor was the very first fan to see the "Deadpool" film, when the actor flew up to Edmonton, Canada, for an advance screening at the hospital.

Connor is still trying out different chemotherapy treatments, and the experimental treatment at CHOP will be used only as a last resort. If he gets better without needing to go to Philadelphia, his family will donate all the money raised to charity.

McGrath's parents aren't hoping for superpowers. They just want their son to be a healthy kid again.