DeMarco Murray not worried about his decreased role in Eagles offense 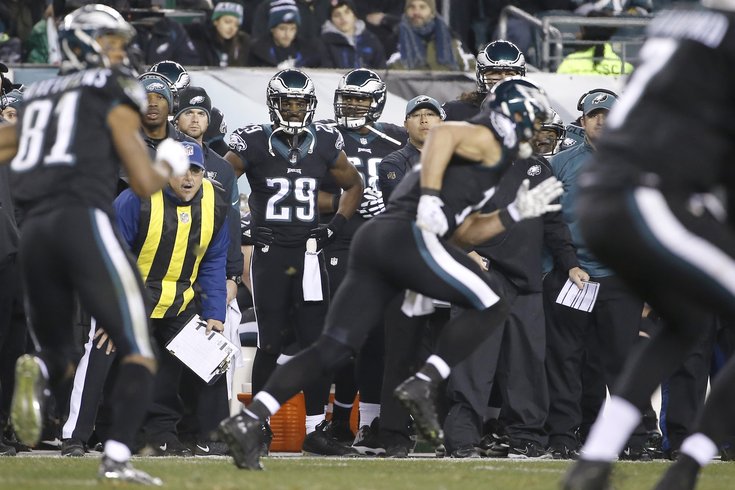 Philadelphia Eagles RB DeMarco Murray watches from the sidelines during the second half against the Cardinals.

Philadelphia Eagles running back DeMarco Murray said on Tuesday that he isn't concerned by the fact that his workload has rapidly gone from light to barely even there.

"At the end of the day, we are in a position to make the playoffs, and I think that is where a lot of people's focuses are," the 2014 NFL rushing champ said following Tuesday's practice. "I'm not worried about how many plays I am getting. Whenever I get in, I have to make the most of it."

Against the Cardinals on Sunday night, Murray was on the field for just eight total snaps and finished with two carries -- the first of which didn't come until midway through the third quarter -- for three yards.

After the game, Murray seemed like his normal, reserved self when speaking to the media, but according to a report, he may have already vented some frustration before reporters arrived.

At this point, being frustrated would only be natural for Murray. But there was little evidence of that in the locker room on Tuesday.

"I'm blessed," Murray said. "I have the opportunity to be in the NFL, I have a beautiful wife, a beautiful baby girl and a boy on the way. At the end of the day I can't complain."

On Monday, head coach Chip Kelly said that Murray's decreased workload was due to the fact that the Eagles only ran the ball 19 times. However, Ryan Mathews carried the ball 11 times and Darren Sproles carried it six times, so it's not like there weren't carries to be had. Even if the Eagles did run the ball 15 more times, it's hard to envision that Murray would've suddenly become their main back considering his snap count and final stat line.

Against the Patriots, Kelly said he opted to feature Darren Sproles due to the overall size of New England's linebackers. But over the last two games, against two different sets of linebackers, Murray's workload hasn't increased.

Neither has his production.

On Tuesday, offensive coordinator Pat Shurmur revealed that he had a conversation with Murray after the 40-17 loss to the Cardinals, but wouldn't reveal what was said.

"I spoke to [Murray] yesterday," he said. "I speak to him on a daily basis. He is really good. When he comes in, he trains like he is supposed to do. He is like every guy, he wants to get the ball on every play, and disappointed when he doesn't get it. We all get that."

Murray later confirmed their conversation but also neglected to divulge any of the specifics, much like he did after his one-on-one conversation with owner Jeffrey Lurie on the flight back from New England.

"We talked," he said. "I always talk to Shurmur. He is a great guy. He's been around the league for a long time. The conversation is between he and I."

When asked why the $40-million free agent has been as productive -- or even used as much -- as he was in Dallas, Shurmur said those days are in the past.

As for the 27-year-old running back, he still feels like the same back he was a year ago.

His numbers, however, say otherwise.