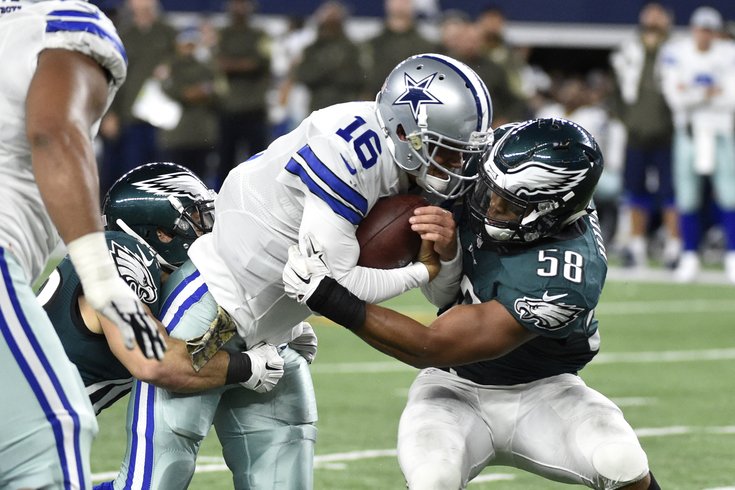 Jordan Hicks' season came to an end during the Eagles Week 9 win over the Cowboys.

For the first half of the season, the Philadelphia Eagles defense was arguably the strength of this team. In recent weeks, however, it’s become a liability.

Once among the top units in the league against the run, Billy Davis’ defense has fallen to 30th in both rushing yards allowed and yards per attempt. And against the pass, they aren’t much better. The Eagles have allowed 30 passing touchdowns through 14 games (29th in NFL), the same number Cary Williams, Bradley Fletcher and Nate Allen surrendered all of last season.

Currently, the Eagles rank 29th in total defense — they give up 393.3 yards/game — and 28th in points allowed (25.9/game). But that hasn’t been the case for the entire season, and their sudden collapse may have been triggered by something we weren’t yet ready to call catastrophic for Davis’ unit.

The loss of rookie Jordan Hicks for the season.

Injuries to middle linebackers Kiko Alonso and DeMeco Ryans forced the rookie into action early in the season, and he outperformed nearly everyone’s expectations. In eight games, the first of which he didn’t play a defensive snap, Hicks made 50 tackles (43 solo), recovered three fumbles (forced another) and intercepted two passes (one of which he returned for a touchdown).

He also has one sack, and it was a big one,  arguably the biggest reason the Eagles are still alive in the NFC East. Hicks delivered the hit that broke Tony Romo's collarbone and sidelined the Dallas QB for several weeks, before a similar hit ended his season.

But when Hicks, who had become known as the Simba to Ryans’ Mufasa, tore a pectoral muscle against the Cowboys, many figured the Eagles wouldn’t miss a beat at middle linebacker. After all, they still had Ryans, Alonso and Mychal Kendricks. It was tough to see a potential defensive rookie of the year have his season shortened, but as it pertained to the Eagles defense as a whole, it wasn’t considered to be a devastating loss.

As it turns out, Hicks -- a pleasant surprise who was never really penciled in as full-time contributor because of their depth a MLB -- was a lot more valuable to the defense than we thought, especially against the run.

I’ll let you read that one again: The Eagles rush defense was 50 yards/game better when Simba was in the lineup. And since sometimes numbers speak for themselves, here’s a week-by-week look at their performance on the defensive side of the ball: 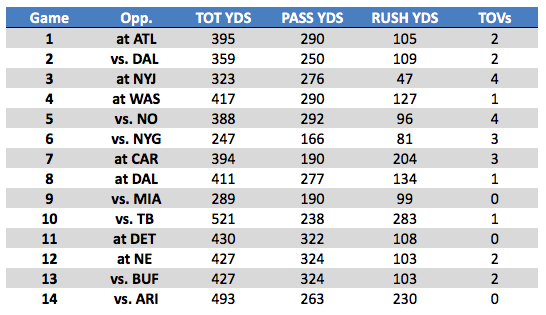 Now, let's look at each of those individually, starting with total yards allowed: 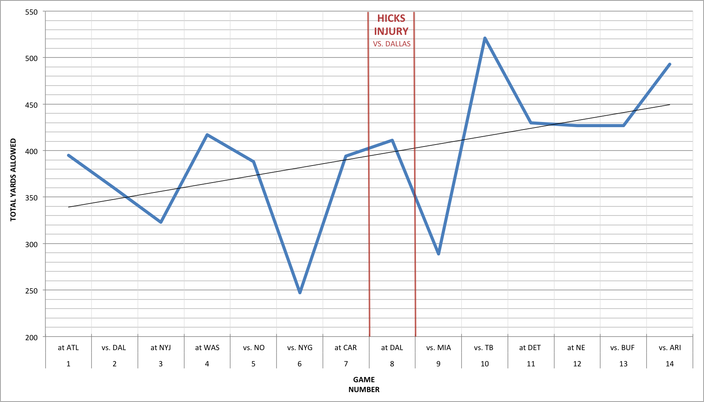 And now against the pass, where Hicks' absence has seemingly had the least impact: 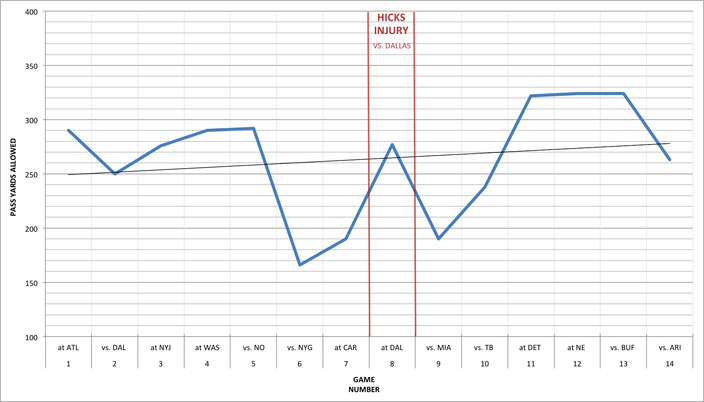 But against the run, you can really see what he meant to this defense: 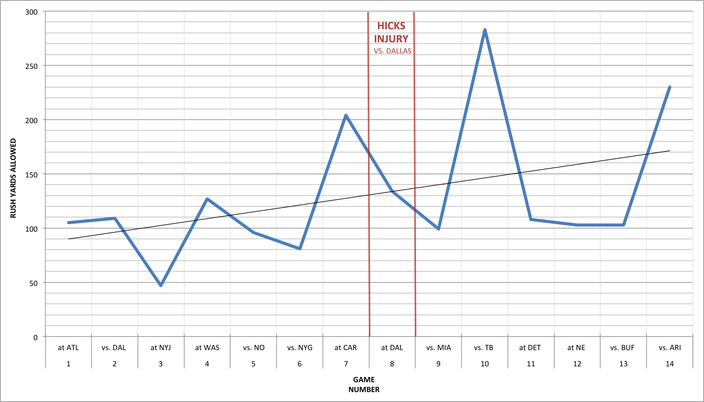 Another area where Hicks' presence has been missed is in takeaways. The Eagles created 19 of them (2.38/game) with the rookie in the lineup -- Hicks was responsible for four of them -- but have only managed five in the six games since (0.83/game). 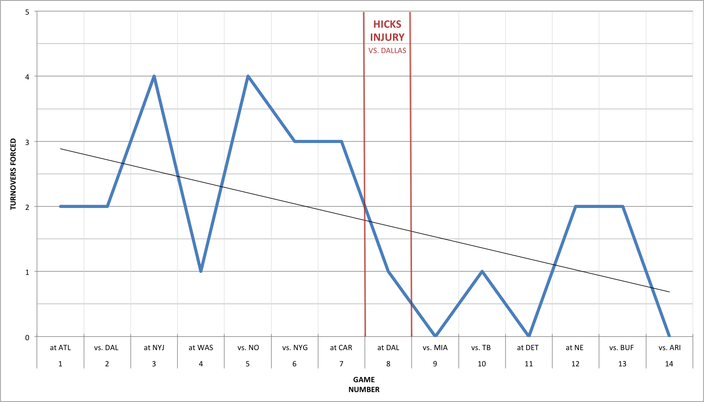 And as a result, the Eagles are just 2-4 since Hicks tore his pectoral in the final minutes of his team's overtime win in Dallas. In the seven games in which Hicks played a significant number of defensive snaps, the Eagles are 4-3. Furthermore, they've allowed 33 points per game over their last six after averaging 20.5 through their first eight games of the season.

Clearly, there's more plaguing this defense than an injured rookie. That includes subpar play from Alonso -- who was acquired in exchange for the franchise's all-time leading rusher, LeSean McCoy -- and big-money free agent CB Byron Maxwell. But once you see the numbers, it's hard to ignore the impact the 23-year-old Texas product had on the defense prior to his injury.

And if you're looking for a silver lining here, just remember that Hicks will be back out there next season.