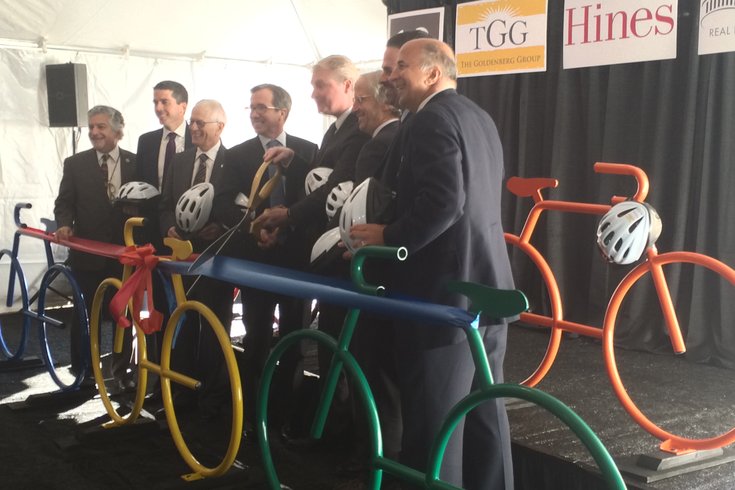 Dignitaries and developers cut a ribbon on bike racks that will be donated to the city at the groundbreaking ceremony for 1213 Walnut Street.

Most groundbreaking ceremonies involve hard hats, shovels and a pile of a dirt.

The developers behind the upcoming residential tower at 1213 Walnut Street decided to wear bicycle helmets instead. Rather than digging into dirt, they cut the ribbon on a line of colorful bike racks that will get donated to the city.

It’s a symbol of how the project, spearheaded by The Goldenberg Group, is trying to appeal to a new kind of urban dweller in a new kind of Philadelphia. It’s also a reflection on how Center City, whose population has grown 16 percent since 2000, is growing to meet new demand.

“America is undergoing a transformation of re-urbanization … people want to live close to where they work and engage in walkable places,” said Alan Greenberger, the Deputy Mayor for Economic Development.

Seth Shapiro, a partner at TGG, described what his firm imagined as the typical resident. Whether they are a millennial just out of college, a tech or health care professional working in nearby Thomas Jefferson hospital or a baby boomer who has left the suburbs, they tend to gravitate to certain activities.

“They’re selling their cars. They’re riding bikes. They care about their environmental footprint,” said Shapiro. “They have pets. They’re dining out, and dining outdoors. They’re exercising. They’re cross-fitting, they’re Zumba-ing, they’re Spartan Racing. Quite simply, they are living a different lifestyle than Philadelphia was built for.”

So TGG, in its first real estate partnership with developers from Texas and Washington, D.C., developed the property to appeal to modern tastes. For example, the 26-story tower won’t have parking, but it will have a bicycle storage and workshop area.

It will also have a fitness center, a yoga terrace, a gaming area, an entertainment kitchen, a rooftop deck and a dog park. To top it all off, literally, it will have a green roof and LEED Silver certification for environmental sustainability.

There’s reason to celebrate whenever grounds break on a new project, but the ceremony on Tuesday had a particularly optimistic air – perhaps because this development has been 10 years in the making.

“A lot of people said it would never happen, but you know, with a lot of hard work and a lot of smart people, good things happen,” said Councilman Mark Squilla, who represents the first district.

U3 Ventures had the lot on their hands since 2007 and succeeded in getting a zoning change to allow more density on the site, but the recession and opposition from neighbors stymied their plans. As the Philadelphia Business Journal reported, the owner of Fergie’s Pub next door sued, objecting to a site plan that included 152 hotel rooms in a 30-story building; that suit has since been settled.

U3 sold the project last year to Goldenberg, a local firm, for $8.2 million. TGG then teamed up with Houston-based Hines, a global real estate investment firm that manages almost $85 billion in assets, and D.C.-based ASB Real Estate Investments.

This is the first real estate project from the partnership, though far from the first Philly venture for TGG, which is known for projects like the Columbus Commons shopping center in South Philly, the Metroplex in Plymouth Meeting and The Ayer on Washington Square.

Squilla said he likes the fact that firms outside of Philadelphia were part of the project, because it shows that “the economic engine that’s driving Philadelphia is something that other people recognize.”

It can also send a signal to more investors in the future.

“We’re trying to track retail, we’re trying to get East Market going. When you see all this excitement, projects like this make it happen,” he said. “People now believe in it.”