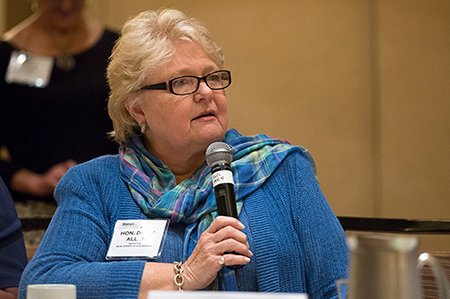 Diane Allen will not run for re-election at the close of 2017. She has served in the New Jersey Senate for 21 years.

She has previously said she had been treated for oral cancer.

Allen has served in senate leadership roles beginning in 1998. She is currently the deputy minority leader.

“It has always been my intention to run for another term," the former broadcast journalist, who is in her 21st year representing the 7th District, said in a statement. But "I have decided to make this term my last and 2017 my last year in office."

“While this is supposedly a part-time position, I have never treated it as such. Fortunately, I believe I can maintain a pace to continue to serve my district this year," she said. "What I can’t imagine is adding the many extra hours a campaign would require. I want to expend my energy serving my constituents and working to solve the problems they and the rest of us in New Jersey face.

“There are those who stand on conviction, who follow their moral compass and who put people over politics," she added. "I look forward to continuing to work with them this coming year.”

Allen has worked for the stations KYW and WCAU in Philadelphia. She filed an age and sex discrimination complaint against CBS, WCAU's owner, and won. Allen is the former president of VidComm, Inc., a video production company.

She lives with her husband in Edgewater Park, Burlington County.