A Dickens of a celebration

Literature lovers give annual Clark Park toast to Dickens at his only U.S. statue 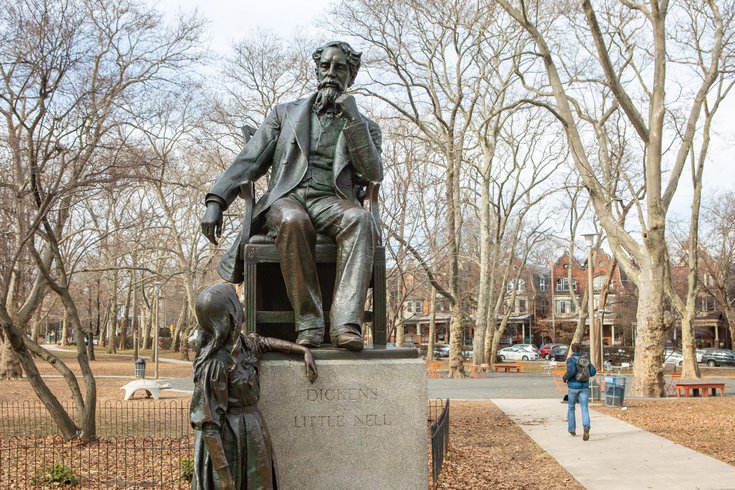 A statue of Charles Dickens and Little Nell in West Philadelphia's Clark Park.

This weekend people from places as far as Vermont,  Pittsburgh and New York will trek to West Philadelphia with one goal in mind: celebrating the birth of Charles Dickens at the only statue of him in the country.

In his will the beloved writer of such classics as "A Christmas Carol," "Great Expectations" and "Oliver Twist" stated that no images of himself be made.

Apparently, artist Frank Ewell never got the message. He made the life-sized bronze statue, which also features Little Nell from the "Old Curiosity Shop," for the 1904 World's Fair in Chicago. He hoped to sell it in England, but there were no takers. When the statue returned to the United States at Philadelphia, the Fairmount Park Commission purchased it for display at the newly opened Clark Park at 4300 Baltimore Ave.

Since then other statues of Dickens have been installed in Portsmouth, England and Sydney, Australia.

But for now, the Friends of Clark Park (FOCP) celebrate with the only statue of him in the country. For more than 30 years, the group has hosted a birthday party for Dickens, featuring members dressed in period costumes reading from his works. Dickens was born on February 7, and the FOCP celebrates it on the first Sunday of that month.

“He's an amazing writer -- his stories are true to life and incredibly human,” said Bob Behr, a retired teacher who organizes the event – the last three by emails and phone from Vermont, where he and his wife moved, although they return to Philadelphia for the function. He said it takes “lots of time and effort, but, really, it's a literary labor of love. I help choose each year's selections and I contact the readers and musicians.”

Behr has been with the group for “over 25 years. I've lost count. After the statue was vandalized -- and repaired -- many years ago, people from the neighborhood and the Friends of Clark Park decided to raise the public's awareness of this beautiful sculpture and, of course, of Dickens' writings.” 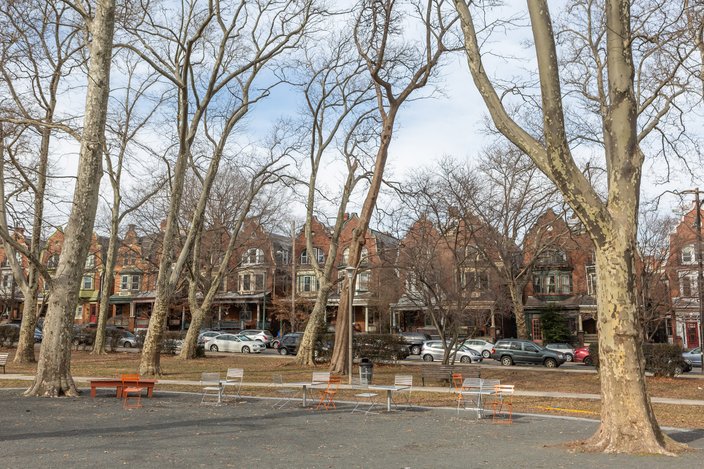 Sunday's shindig starts at 1:45 p.m. at Griffith Hall at the University of Sciences, next to the park, with a performance by Classical Revolution Philly. At 2 p.m, the readings begin: the performers include Kevin Quinn, a north New Jersey resident and member of the New York Dickens Fellowship, who will read from "Great Expectations"; Ceil Mann, from Media, will read from "The Pickwick Papers"; Larry Beck, an actor, and West Philadelphia resident, will read from "Dombey and Son"; and Ruthanne E. Ankney, who for the past three years has driven from her home near Pittsburgh to participate, will read from a Dickens short story, "The Chimes."

A teacher of theater and folks arts, Ankney came to Philadelphia for graduate school, stayed, then returned to the Pittsburgh area to care for her mother.

“I'm a Dickens fan, and I miss that neighborhood, I miss the excitement and all those people who love the works of Dickens and what we create. And even though I live so far away, I try to make it back to do it,” she said.

Last year, she left her home at 5:45 a.m., and wound up changing into her costume in a Philadelphia hotel. She made it to Clark Park with an hour to prepare for her performance.

After the readings, there's birthday cake and baked goods, a walk to the statue, a rendition of Happy Birthday, and the Kingsessing Morris Men (who won third place in a division of the Mummers Parade), will provide a traditional English folk dance.

“We'll finish around 4 p.m., so there's plenty of time to make it to your Super Bowl party,” said master of ceremonies Frank Chance, who has handled the introductions for the past 10 years.

Another member, Linda Blythe said, “I got interested in the sculptor after I attended a Dickens party about 18 years ago. Frank Ewell turned out to be an interesting person to research. He knew lots of famous people. He was a very close friend of Louisa May Alcott.  In later life, he worked at the Metropolitan Museum of Art, where he was dramatically fired from his job by J. P. Morgan.”

Christine Nelson and her family moved into the area in 2003, and couldn't believe what she saw in the park.

“What in the world were they doing there? Most 19th-century American statues depict men of political or military fame. Here we had a writer in company with a fictional character sprung from his imagination!” said Nelson, who is curator of one of the largest collections of Dickens letters and manuscripts at New York's Morgan Library & Museum. She once read from a copy of a letter Dickens wrote to his friend, the actor W. C. Macready.

Edward Pettit of Jenkintown, and his daughter, Sophie, will read from "David Copperfield."  He's done performance readings of Edgar Alan Poe, which led to the Dickens event.

“Some of my Poe friends were active in the Clark Park celebration and with the Poe-Dickens connections through Grip the raven – Dickens' pet raven (that) inspired Poe's poem. I was attracted to their commemoration. I also like literary celebrations in general, and if I can read at one, then I'm all in,” he said.

Editor's note: An earlier version of this story incorrectly reported the name of Edward Pettit's daughter, Sophie. We regret the error.