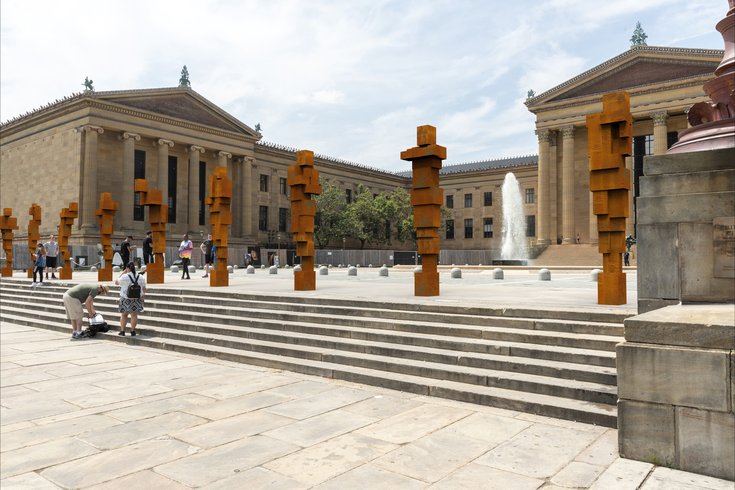 Courtesy of /the artist, Antony Gormley, and Sean Kelly Gallery

Beginning Thursday, Jan. 24, look for ten massive sculptures at the Philadelphia Museum of Art's east terrace, aka the top of the Rocky Steps.

"Stand," an installation by British artist Sir Antony Gormley, will be on view outside the museum through the early summer. Part of Gormley's "Blockworks" series, each sculpture of piled blocks is cast-iron and about 10-feet tall.

Gormley – a well-known name in the art world – visited the Philadelphia Museum of Art in 2013, and according to a press release was "taken by the aesthetic and social significance of its setting." He then began discussing with the museum's director the possibility of an installation there.

Gormley has had numerous solo exhibits in notable places like the National Portrait Gallery in London, England (2016), and the Forte di Belvedere in Florence, Italy (2015).

Discussing "Stand" Gormley stated, "Like standing stones, these works are markers in space, but I would also like them to engage the viewer’s time."

"This is an exciting opportunity to see what sculpture can make us think and feel. What can it do to and for us?"