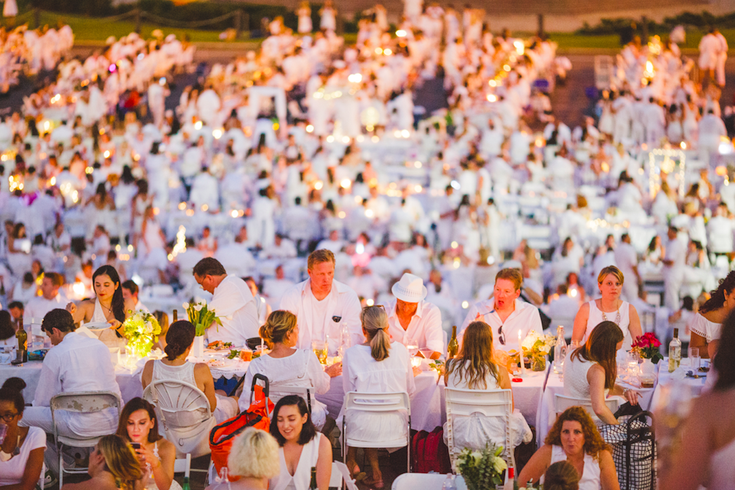 A photo from the 2016 Diner en Blanc at the Philadelphia Museum of Art. Where will the 2019 dinner be held?

Philadelphia's Dîner en Blanc, the hyper-popular outdoor dinner party all in white, has been keeping its date a secret --until today, Tuesday.

At a preview party at The Bourse food hall in Old City, organizers announced the event will happen on Thursday, August 22.

RELATED: You can go on a kayaking excursion on the Delaware River this summer | Radio 104.5 block party free tickets may be gone but you can still get in

Also in keeping with the popular event's traditions, which is celebrated in various cities worldwide and is now in its eighth year in Philadelphia, is the involved process to try to attend.

The waitlist for Dîner en Blanc opened last week and while getting on the list doesn't guarantee a spot, people will be notified when tickets goes on sale in early summer. That is only after previous attendants to the dinner party get first dibs.

While Dîner en Blanc is celebrated in various cities in the United States including New York City, Chicago and Los Angeles, Philadelphia's event is not only the oldest it remains the largest. This year, an expected 6,000 people are expected to participate, topping last year's 5,800 and outpacing other cities.

"It grows each year," said co-host Natanya DiBona, as she navigated a frenzy of media interviews and well-wishes from volunteers at the crowded preview party, where organizers held a raffle to attend the dinner to support the Broad Street Ministry, which provides meals and care for those struggling with poverty.

While other cities have embraced Dîner en Blanc, there seemed to be a particular hunger for the elegance of the event in Philadelphia, DiBona said. It also helped that the city had various unique public spaces to hold the massive dinner engagement. "We have so many places to show off," she said.

Attendants are expected to be dressed all in white and bring their own food, drink, tables of a specific size, and chairs. The dinner has been held in various high profile places, including by the Philadelphia Art Museum, Logan Circle and outside City Hall.