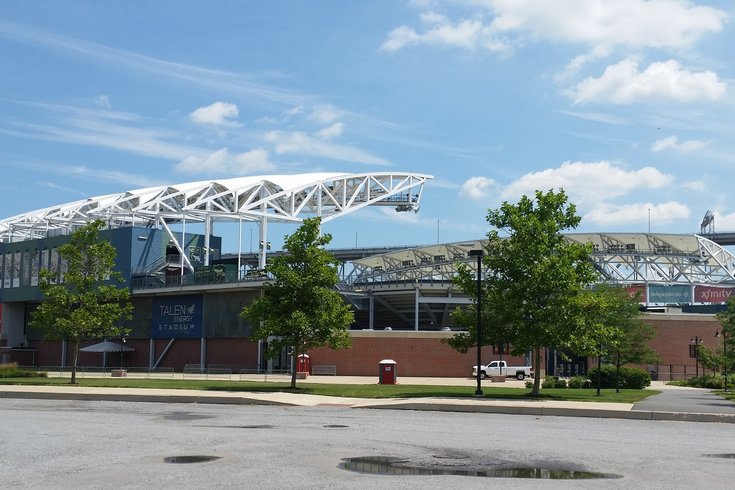 There's a blueprint of the Philadelphia Union's brand new headquarters sprawled across a table inside Tim McDermott's office.

Construction has yet to start on the building, which will go up near Talen Energy Stadium along the Delaware River waterfront. The Union are finishing one project at a time, but there are a lot of ideas in the pipeline.

That's the key word – "ideas." McDermott only recently assumed the role of Chief Business Officer, but one of the first things you learn about him is that he's full of ideas. Even in casual conversation, you get the sense that McDermott is processing thoughts and theories in a way that might give someone else a headache from information overload.

Maybe the most intriguing part is that he seems to draw that data from a variety of sources. Most executives think they know what's best for a franchise, but McDermott doesn't strike you as the egotistical type. For him, the fans are the primary information providers. He even asks the media for input.

Philly Voice recently sat down with McDermott to discuss a wide variety of topics, from gameday experience, to business priorities, and the concept of using Talen for non-soccer events. We started with the special events scheduled for this Saturday's home game against D.C. United.

PhillyVoice: Tell us about "Patriot Night".

Tim McDermott: This Saturday we play D.C. United and there will be post-game fireworks. It's an opportunity for us to celebrate military history and heritage, and for us to do some pretty cool and unique things, honoring different members of the military. It should be a special night for our fans. I'm excited to see the fireworks post-game, launching from the barge, that will be my first time seeing them. I'm told we've engineered the barges so that they don't go down river too far, so everybody can see them from the stadium.

PhillyVoice: A lot of teams have these fireworks nights, but you're going to have military vehicles, equipment, and active military personnel on hand. How important was it to add these things and take this a step further?

McDermott: I would say, in general, what we want to do is build strong platforms that our fans can really rally around. The idea of Patriot Night is one that I think we can do year after year. You really make that something special. We obviously moved the broadcast to 6 ABC to help augment that as well. Part of what we're trying to do, just strategically speaking, is, can we create 10 to 12 of these unique and hallmark platforms that we can put all of our marketing efforts behind, and corporate partnership efforts behind, and really enhance what we're doing?

PhillyVoice: If a little girl enjoyed camping out on the field after a game, she could look forward to doing that next year.

McDermott: Yea. So, we have a great partnership with ACME, and they're involved with the 'U Camp Out' program. It's a great chance for folks to come down, watch a game, watch fireworks, and then sleep out on the field overnight. I think that's kind of core to our brand, too. We want to be a brand that really celebrates patriotism. A lot of the Philadelphia Union brand has been built on the heritage of the city and the Union army. It kind of makes sense for us to celebrate military history. That's important to us.

PhillyVoice: One of the first things you wanted to do when you started here was to create this Union fan council. How's that going and what have you heard from those supporters?

McDermott: We first had this (step) of 'send me your five ideas'. We collected, I don't know how many thousands of ideas. That's been really good. From that, I've basically put together 10 strategies to help grow the Philadelphia Union. From a more macro picture, I'm a big believer that one of the key assets that we have at the Union is being extremely fan-centric. I mean, without the fans, this team literally does not exist. That's one of the things that I want to continue - to reach out, have a great dialogue with the fans, and give them a true sense of ownership.

We did start the fan advisory board. We haven't technically announced who's on it. I guess that's coming in the next week or so. We do have about 25 folks who will be on it. We had one meeting, just as a quick introduction meeting, and outlining what the involvement will look like. They'll meet, I'd say about eight to 10 times per year. A great example of that is (upcoming) season ticket renewals, where we go to them and say, 'hey, this is what we're thinking for renewals, do you think we're on brand? do you think this makes sense?' We want them to give us feedback, give us true, honest feedback. The other piece that we talked a lot about with the group is, not just telling us things that we can do better and the things that we're not doing right, but being a solutions provider for us and coming up with ideas to help solve the problems. So, really acting as an extension of the Philadelphia Union, or acting as the extension of a marketing or sales department, and really helping us with (identifying) the gaps and providing ways to fix them. I'm just a big believer in... (pause) I don't want this brand to be about what I think is right. I want this to be a brand about what the fans think is right, and really empower them to have say over a variety of different things. I firmly believe that if you're willing to listen to the fans, a lot of times they have the answers, and great answers. But too often we may not be willing to hear or take the time to listen to the fans. That's a big piece of what we're trying to do.

PhilyVoice: You've been here long enough to get a good read on the gameday experience. What do you like so far? What needs to improve?

McDermott: When I worked at the Sixers, myself and the other executives when we spoke about who has the best stadium experience, we would always reference the Philadelphia Union. It's a very intimate and warm feeling. It's a passionate feeling. It's easy to get to and from (the stadium). Obviously, the look of the stadium, looking over the water is second to none. It's picturesque, right? Where else can you watch a game, and see a huge ship coming down the Delaware River? That is amazing, with the bridge in the background. I think our stadium experience and gameday experience is truly second to none in Philadelphia. What we're trying to do is take all the different touch points a fan has and walk through the 'driveway to driveway' experience, and figure out, along that experience, what are the areas we can make better? I think going back to the fan council, this is an area where we want to invite them in and get their perspective on what we can do better.

I think the other thing is that we don't want to assume that we know the answers. By that, I mean simple things like game entertainment. Up until now, we literally had done nothing at halftime, and the field sat dormant. I saw that and thought, well, isn't our responsibility to entertain the fans the entire time? Again, though, I don't want to assume that the answer is, 'let's do A, B, or C', in terms of halftime entertainment. I'd rather ask the fans what that looks like. That's kind of what we're trying to do, is get some feedback from them, and not just assume that, 'well, in Europe, or this other place, this is the way they do it'. That may not be what fans in Philadelphia want. We're just trying to be open to what they want. I personally believe that we want to entertain fans the entire time, so we've been doing things at halftime and adding in more entertainment, and somewhat conservatively. We started off doing mini (soccer) games at halftime. It's fun and it kind of fits with our brand and celebrating youth soccer.

PhillyVoice: Thinking back to some of the specifics that I've heard from fans, they usually mention the idea of paving the parking lots. They talk about the lack of things to do around the stadium and the lack of development, which may or may not be the Union's responsibility. It may not be realistic in the short term. Have fans asked you about those topics specifically?

McDermott: The paving of the parking lots I have heard. It's something I'm mindful and watchful of. I also have to look at that from the standpoint of, if you invest money there, do you get a return from doing that? Or should we put money into something else? What I would say is, I would like to have it so that when you come down to a game, you feel like you step on campus. When you come off the ramps, and you look at the rectangle riverfront block that the Union owns and controls, that is where I think we can dramatically improve the look of that area, and make it feel like you're now on the Union campus. It should give you that feel that you stepped onto the Nike, or Adidas, or Under Armor campus, so to speak. I think that's where we can work to improve some of that...

PhillyVoice: There are obstacles there obviously. There are private lots that are owned by individuals. If you're talking about this idea of getting a return on investments, is devoting resources into purchasing that land or focusing on parking lots going to be worth it?

McDermott: I think it's an area that we need to look at a little closer and find out if that materially changes someone's gameday experience. Or, would that money be better spent somewhere else? My intuition is that there are other areas that we can invest in besides paving a parking lot. I went to the Super Bowl this past year, and the parking lot we parked in was not paved. That was the Super Bowl. Maybe that's not the best analogy. I'm not sure. What I would say is, how do we improve the overall experience? If that's paving the lots, then great. But maybe it's something else inside the parking lots. Maybe we have grills that people can use in the parking lots. Maybe we can have an expanded plaza. Maybe we need more video scoreboards, things like that. I think we need to look at all of the different variables and options then decide from there.