The reverend's Christian upbringing spurred a career in politics 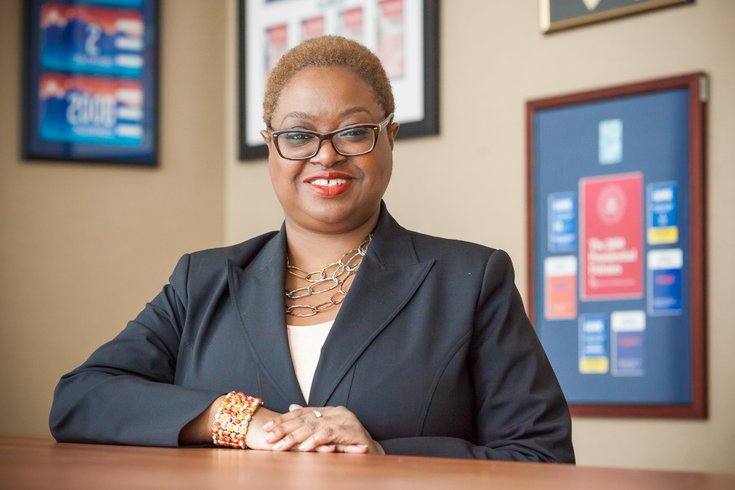 The Rev. Leah Daughtry takes a break in the action during a recent interview at the 2016 Democratic National Convention headquarters on Market Street in Philadelphia.

The Rev. Leah Daughtry, the woman tapped to oversee the Democratic National Convention, first scrutinized her Pentecostal upbringing while a student at Dartmouth College. The act was not unlike many young adults who weigh the lessons of their youth.

Far from her childhood home of Brooklyn, New York, Daughtry posed herself a couple of questions: Is there a God and, if so, what is her relationship to the divine?

"Those college years are when it crystallized for me that I believe what I believe because I believe it – not because of what my father or my mom or anybody else in my family believes," Daughtry said. "This faith was real to me and for me. I knew from that point that it would be a foundational part of my life and upon which everything else was built."

Indeed, Daughtry's Pentecostal Christian faith has served as the bedrock for a political career now in its fourth decade. Since campaigning for Jesse Jackson in 1984, Daughtry has served as an undersecretary at the Department of Labor, as chief of staff to the Democratic National Committee and as chief executive officer of the 2008 Democratic convention in Denver.

Now, Daughtry is reprising that last role in Philadelphia. She's the first person to oversee the Democratic National Convention twice and, perhaps, for good reason. It's a tireless position that requires Daughtry to manage all planning and execution aspects of the convention – everything from media arrangements to hotel bookings.

Unsurprisingly, Daughtry knows the exact number of days until the convention commences.

"If I ever got the chance to meet Ted Cruz, I would just want to sit down and ask him, 'How did you get to this set of values, which is so different, from the same place?' Our fathers are both pastors. How did that happen? I don't understand it." – the Rev. Leah Daughtry

"She's very well organized," said former Vermont Gov. Howard Dean, the DNC chairman when Daughtry oversaw the 2008 convention. "She has an ability to draw good people to her and she treats her staff very well. She expects a lot of them, but treats them very well. That's the essence of very good team building."

Danielle Coleman, special assistant to the DNC's chief counsel, described Daughtry as a visionary who sees beyond the convention. Daughtry works to eliminate hierarchical boundaries by stressing the importance of the team, she said.

'WE TREAT PEOPLE'S NEEDS AS HOLY'

Meanwhile, Daughtry also pastors a small Pentecostal congregation in Washington, continuing her family's calling through the fifth generation. It's a role her family has long combined with political activism. And it's essential to her politics.

"Part of our faith system is that we are encouraged – we think mandated – to be engaged in the community around us," Daughtry said. "One of the ways that we chose to do that is through community activism on social justice issues. Part of that was an understanding that who is in office affects the quality of people's lives."

As a Pentecostal Christian, Daughtry believes that God's spirit dwells within everyone, connecting everyone to the divine. Therefore, she said, it is paramount to treat people's needs as holy. That includes everything from safe communities to clean air and drinking water.

"All of that is part of the social structure in this country that allows you to lead a life where you can be all God intends you to be," Daughtry said. "For me, working in (politics) is a way to ensure that we treat people's needs as holy and that we lift up their needs and ensure that the needs of the divine are honored and met."

It is also what drives her to the Democratic Party. Still, she recognizes that many white Christians vote Republican, though she finds many GOP values to be at odds with her interpretation of Biblical scripture.

"If I ever got the chance to meet Ted Cruz, I would just want to sit down and ask him, 'How did you get to this set of values, which is so different, from the same place?'" Daughtry said. "Our fathers are both pastors. How did that happen? I don't understand it."

Nevertheless, Daughtry has worked to attract people of all faiths to the Democratic Party, for years viewed as more secular than the GOP.

Dean recalls sitting in his office with Daughtry and a pollster shortly after he became DNC chairman in 2005. He was baffled that vast majorities of Christians had voted Republican in the prior election, despite the "red-letter" teachings of Jesus, which he perceived as "far to the left."

That meeting hatched Faith In Action, an initiative Daughtry started to reshape the Democratic Party's perception among religious voters. Dean credited those efforts with courting many socially conservative Latinos, who shifted toward the Democrats when Barack Obama ran in 2008.

Dean, who once was described by the New Republic as the "one of the most secular candidates to run for president in modern history," sees Daughtry as the embodiment of someone living out her faith.

"She is what I would call a real Christian," Dean said. "The principles of Jesus guide her life in this sense – she is always thinking about how I would I want to be treated in this circumstance and how do I treat the least among us. ... She's incredibly grounded in her faith. It makes her a joy to be around."

Sometimes that comes at a cost – literally. Daughtry keeps a swear jar on her desk, fining those who curse in her presence. Dean expects it to fill up rapidly as the DNC draws near.

"You know how politicians talk," Dean said. "I'm sure she makes some good money."

But knowing Daughtry, Dean said, the earnings are likely to be donated to a cause.