Done in by dead balls: Player grades and analysis for New York 2, Union 1 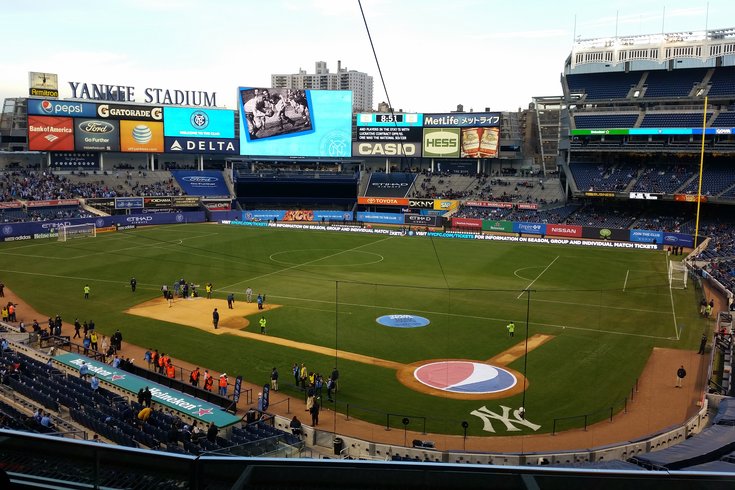 A Saturday win would have made for the perfect narrative.

"The Philadelphia Union are who we thought they were – a .500 team. After a poor start to the season, they've fought back to a reasonable 5-5-4 record, straddling the playoff line with a new lease on life as we head into the June international break."

But instead of completing that mid-season "reset," Philly stumbled again, this time conceding two set piece goals in the final 15 minutes of a 2-1 loss.

They go into the two-week break with a 4-6-4 record and 1.14 points-per-game average, which puts Jim Curtin's team 10th in the Eastern Conference and 18th in the combined standings.

There was a lot of talk post-game about the decision to use Josh Yaro in the gameday 18, but it really didn't have much of an impact on the outcome.

Philly started the game with both Yaro and Richie Marquez on the bench, then had to call on both when Oguchi Onyewu and Warren Creavalle left through injury. Marquez was a straight swap for Onyewu in the first half. Yaro came on for Creavalle in the second half, which resulted in Curtin moving Jack Elliott into the defensive midfield.

The issue is that Yaro hasn't played at all this year and Elliott has never played d-mid at this level.

Would it have made more sense to give Yaro a game at Bethlehem Steel, bring Ken Tribbett to New York, and keep Elliott at center back?

Maybe, but that's not why they lost the game.

The reason Philly was in that situation was due to the international absences of Alejandro Bedoya and Derrick Jones.

That resulted in a start for Warren Creavalle, and he played relatively well alongside Haris Medunjanin.

He accrued 19 defensive actions in a 71-minute shift, doing his typically rangy work while New York carried most of the possession. 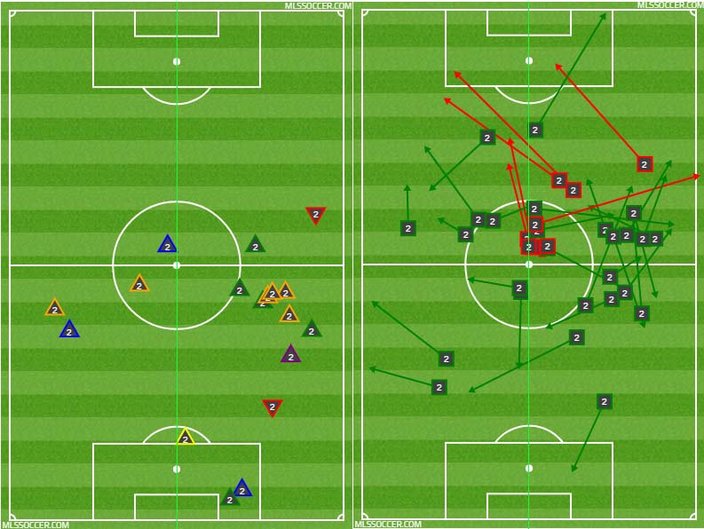 One thing I did find interesting was that Creavalle continued the positional trend we've seen from Bedoya in weeks prior. Most of his defensive actions and passing attempts took place on the right side of the field, while Medunjanin did more work on the left.

Curtin explained last week that Bedoya naturally drifts to that side as a right-footed player and former winger. Medunjanin, a lefty, opens up facing the other way. Creavalle is also right-footed, so most of his actions, as you see above, look very similar to a normal Bedoya chart.

I saw a first-half sequence that somewhat foreshadowed the Union goal:

Surprised we didn't see more of this Saturday, easy cues for Medunjanin (vertical pass) and Ilsinho (back turned) to combo press pic.twitter.com/S2F5dZmzur

You see in that clip a smart combination press from Medunjanin and Ilsinho, reading two separate cues to close the gap and turn New York over. In this case, they can't spring the counterattack and end up winning a foul instead with C.J. Sapong working inside his own half.

A similar thing happened on the goal, where Fafa Picault sees a quick opportunity to jump on an unaware NYC player with Sapong again in position to pick up the scraps. Both plays take place right around the midfield line.

This time, Sapong can turn and push upfield, playing Picault into the channel for a great cut and finish. 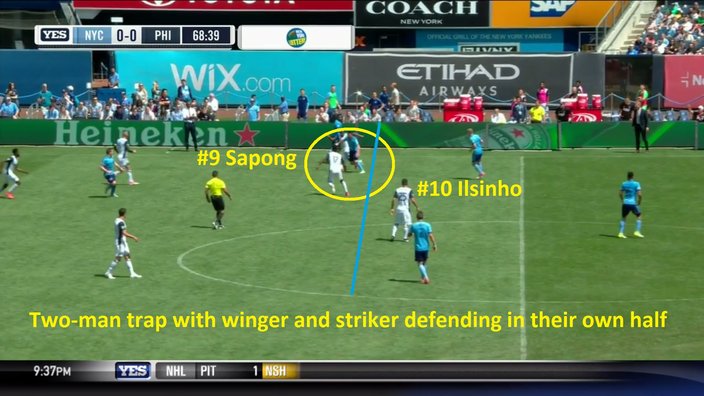 That's Philadelphia Union 101 right there, a prototypical goal for a Curtin-coached team. Defense creates offense, and in this situation you have a winger making a play, a target man playing a secondary role, and Picault ultimately being rewarded for his two-way work.

Also, shame on every editor who cuts highlights of these goals, because they completely fail to start their timelines in positions that show the genesis of the actual play. Every single highlight of this goal on social media starts with Sapong on the ball, totally ignoring the defensive work that started the entire movement.

New York equalized on a corner kick 80 minutes into the game.

In the past, we've seen Richie Marquez struggle in set-piece defense, mainly because he has issues fighting through screens and stunts and losing his mark. In this case, it's his guy, Maxime Chanot, who scores the goal, but I wouldn't put the blame entirely on Marquez in this situation.

The issue is that the Union don't have anybody on the posts, which is a rarity. They typically put the fullbacks on the posts, but in this case, Ray Gaddis is joining Picault in defending a possible short corner. That leaves Medunjanin floating inside the six with everybody else marked up 1v1. The only player not involved is Roland Alberg, who is out of the picture. 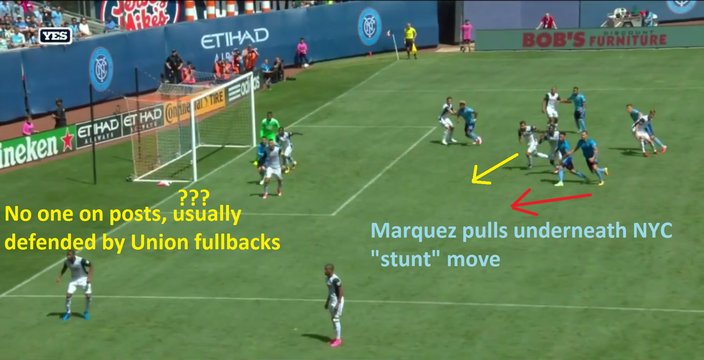 I'm not sure why it's set like this. Maybe it was just the product of the short corner threat, or not being organized properly, or just a lack of time to make assignments. I think the ball is cleared off the line if they have a man on the front post. Marquez fights underneath the New York stunt but can't win the header.

Here's how they were deployed on the second goal: 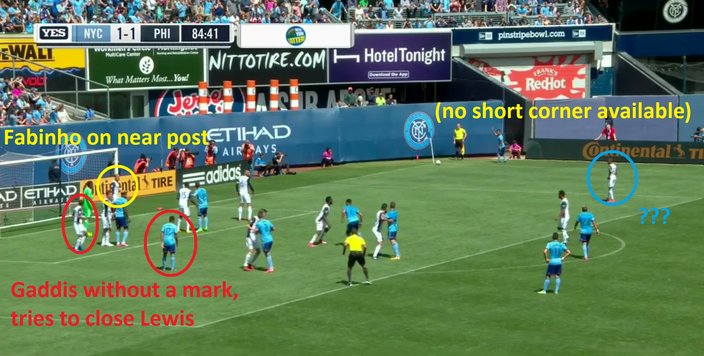 This time you've got Fabinho on the near post with New York deciding not to bring over a second attacker for a short corner option. That leaves eight Union players and six NYC players in the area where the ball lands. Medunjanin is again free inside the six, though Picault is just sort standing at the edge of the 18. We saw Tranquillo Barnetta occupy that position last year, which I think just gives them an outlet following clearance.

The first player to touch the ball is Jonathan Lewis, who looks to be marked by Gaddis, but has five yards of separation for some reason. It bounces around a bit and no one can clear, which results in Alexander Callens tapping in for the game-winner.

On the first goal, they didn't seem to be setup properly. On the second, no one could get the ball out of the box.

Well-earned assist on the Union goal. He started inside his own half, carried the ball forward, then weighted his pass into the channel perfectly.

Outside of that sequence, he had one just shot attempt and was mostly relegated to thankless wrestling matches against the NYC center backs.

Pontius moved over to the left about 20 minutes into the game. He also started the second half on that side and was much more effective, carving out two opportunities right around the 55th minute.

Active early, he had a great endline move to earn a corner in the second minute.

I don't think he got his next touch until the 15-minute mark when he tracked back nicely to intercept a pass. He tried a long range shot nine minutes later that earned his team a corner.

Stranded for large chunks of the game, he only had eight touches in the opening 25 minutes.

He didn't see a ton of the ball after that but made it count, turning over New York and finishing off the sequence 50 yards up the field.

Didn't pass that well, but that's never been his game. He looked fine in his first start of 2017.

Medunjanin couldn't seem to find his range on the smaller pitch. He hit three or four corner kicks too short and tried to adjust on the fly to the unusual dimensions.

Defensively, he was mostly in good positions, logging 10 recoveries on the day. He just wasn't as influential as he normally is going forward.

The set piece design is a story for Gaddis, who was not in his typical dead ball positions on both goals.

Did fine as a center back, then barely touched the ball as a defensive mid. There wasn't enough action in that period to make any sort of judgment on whether or not putting him there made sense.

Shame he had to come out early because I felt like he had played pretty well until that point. He had three clearances, one of which cut out a New York scoring chance inside the box.

His passing left a lot to be desired, exemplified by a span of four first-half minutes where he aimlessly lumped the ball forward on two different occasions. He also turned it over in the second half, leading to a David Villa crossbar strike.

That said, he had a strong defensive win in the 31st minute, pouncing on a through-ball and sliding over to cover for his center backs. On the resulting corner, he cleared from danger after a scramble inside the six.

Just before halftime, he was beat on the endline, forcing Blake into a difficult save. He also had the harder assignment than Gaddis, having to defend Jack Harrison on the crappy part of the field where sod is laid over the infield.

Best Union player on the field for a second straight week.

Yea, he got beat on the first goal, but a player on the near post keeps the game at 1-0.

Conceded two fouls immediately after coming on (one waved on through advantage), then defended well on a blocked Villa shot. Ironically, the first New York goal was scored off a corner that probably didn't need to be conceded. It was a situation where Yaro tried to shepherd the ball to the endline, but it apparently took a deflection before going out.

Great to see him back on the field, but not sure that was the best situation for it.

Drew a foul and hit the resulting free kick off the post in an 11-minute cameo. At this point, I think they are better off starting him at the ten vs. Ilsinho.

Bizarre sequence around 55 minutes where he body blocked Villa on a free kick routine, sprung a Union counter, and then didn't call a foul when Pontius gave Ethan White a blatant two-handed shove.

In the 89th minute, Sean Okoli also tripped Gaddis with a late cheap shot, but neither Grajeda or the second linesman saw it.

More on this tomorrow.