Don't look now, but Carson Wentz and the Eagles might just be for real 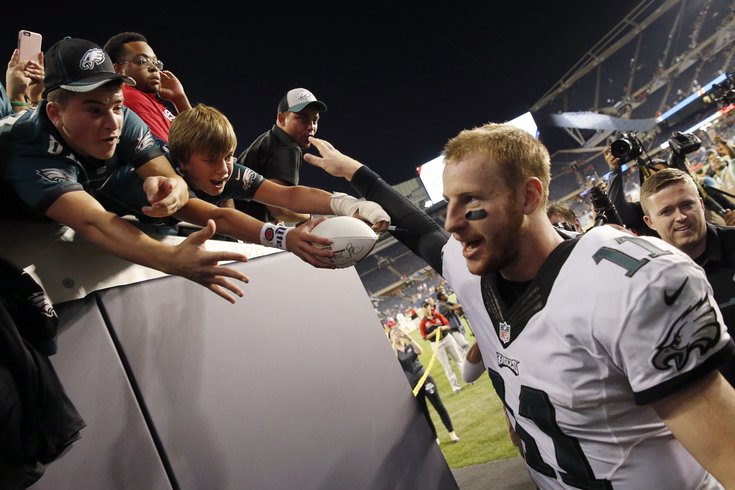 The Eagles are for real. There, I said it.

It's the phrase that's been banging around in the back of your head but you're afraid to speak out loud. If you're like many Eagles fans this Tuesday, you really want to believe it. But the Browns? The Bears? Hardly enough to make you Google where Super Bowl LI is going to be played. But you can only play the opponents on your schedule, right? Still, you can't bring yourself to speak the words, not even after another turnover-free start by rookie quarterback Carson Wentz.

Of course, that all depends on how you choose to define the phrase "for real." For our purposes, that means a team that is capable of not only contending for a playoff spot, but also advancing past the first round. As of this moment, that includes the Eagles.

The two teams that they beat this season, by contrast, are not "for real" – hell, one of them hasn't been in nearly a decade and is essentially the NFL's own twisted Neverland* of crushed dreams and failed quarterbacks.

*The Peter Pan one; not the Michael Jackson one.

Are there reasons to be skeptical that the upstart Eagles will be able to sustain their early success as the season progresses and their competition becomes increasingly difficult? Sure. We've addressed them before and will continue to do so going forward, but no one wants to read about that today. We're going to stay glass-half-full in this one and look at a few reasons why you don't need to seek medical attention if that little voice in the back of your head is telling you to go all in on the Birds this year.

THE KID IS ALRIGHT

Assuming Carson Wentz can avoid taking as many big hits as he has over the first two weeks, the Eagles seem to be doing pretty well for themselves at quarterback. There are more than a few things to like about the rookie, some of which can't be taught and aren't going to suddenly disappear against a more formidable defense.

First, there's his ability to make throws with a man barreling down on him. He was great against the blitz in Week 1 and proved that wasn't a fluke against the Bears. Just look at this throw, which was negated by a penalty and includes one of the aforementioned hits Wentz would do well to avoid. He doesn't flinch.

This is how you earn some respect! Wentz gets DRILLED, but delivers a perfect throw...that was negated on a penalty. (but still though!) pic.twitter.com/uzoIyHIwcT

One of the knocks against Wentz coming out of North Dakota State was his ability to shift the pocket, but he's continually improved in that area throughout the preseason and first two weeks of his NFL career. Here, he steps up to avoid the rush and delivers a silky touch pass to Jordan Matthews.

Matthews again led Eagles receivers in targets (9), receptions (6) and yards (71), but could had so much more. Here's another example of Wentz making the kind of throw you just can't teach, a would-be touchdown to Matthews that slipped right through the wideouts hands.

Let's take one more look at that...

Wentz put the throw right on his hands. Must. Stay. Positive.

Full list of rookie QBs since 1970 to start & win team's 1st 2 games of season without throwing an INT:

This one works both ways. And so far, the Eagles are winning the battle on both sides of the ball.

After creating just one turnover against the Browns in Week 1, Jim Schwartz's defense forced three against the Bears (two fumbles and an interception). That's going to be important going forward, but ultimately it's much harder to control than your own turnovers.

Through two games, the Eagles have been better than any other team at holding on to the ball, as they've yet to turn it over this season. A lot of that is due to Wentz.

Yes, his throws have been accurate -- although more than a few have gone in and out of the hands of his receivers -- but sometimes it's the throws you don't make that wind up being more important. On the Eagles' opening drive, Wentz was 8-of-9 for 48 yards. His only incompletion came on a pass intended for Brent Celek in the end zone and was a Bryce Callahan fingertip away from being a perfect touchdown pass.

Ultimately, the Birds had to settle for a field goal on the drive after getting the ball inside the five-yard line. But on third down, Wentz rolled out of the pocket, looked over all his receivers at least once, and then decided to tuck the ball in and run out of bounds. He probably should have just thrown the ball away once he was outside the pocket, but it didn't wind up hurting the Eagles.

More importantly, Wentz didn't force a bad throw that could have been intercepted and taken easy points off the board. Because of how the rest of the game unfolded, it wasn't a difference-maker, but it showed the kind of decision-making ability that will serve him well going forward. It's also a large part of the reason he's attempted 71 passes and has thrown three touchdowns but no interceptions.

For the second time in as many games, the Eagles defense knocked out the opposing quarterback.

The 2 QBs the Eagles have faced so far don't feel so good. (Not that injuries are to be joked about, obv). pic.twitter.com/RCbNpsfEef

This time, however, Jay Cutler didn't make it to the end of the game and for the second week in a row, the Birds held the opposition to just one offensive touchdown – the Bears' other score came on a punt return.

Their 17 points allowed this season is the best in the NFL, as is the Eagles overall point differential of +34. You can thank Conor Barth's foot and the left upright for that.

The secondary, which was a concern without Leodis McKelvin, was able to keep Alshon Jeffrey out of the end zone, but he nearly hit 100 yards on his 5 receptions. That being said, the front four has played so well and created so much chaos at the line of scrimmage, they haven't been asked to do nearly as much as they will on Sunday when Ben Roethlisberger, Antonio Brown and the Steelers come to town.

Doug Pederson has been a pleasure to watch this season. His play-calling has been on point, his clock management has seemed pretty flawless, and his in-game decision-making has simultaneously made him look smart and ballsy.

The Eagles improved to 4-for-4 this season on fourth down after three successful conversion against the Bears – even if one of them was saved by a penalty. With a rookie QB to boot.

Another thing that has been impressive is the way in which he's scripted the opening drives for his quarterback. Pederson and Wentz have not been shy about the fact that the first 30 or so plays of the game are more or less scripted, and in both games, they've put points on the board right out of the gate. Furthermore, Wentz has arguably looked his best on those drives – 12-of-14 (85.7 pct.) for 102 yards and a TD – and according to ESPN Stats and Info, his eight completions on the opening drive against the Bears were the most by any player this season.

Clearly, the QB-turned-coach knows a thing or two about getting his rookie settled in.

Finally, the Eagles are destroying their opponents in time of possession, which couldn't be more of a contrast to what they were under Chip Kelly. They held the ball for over 36 minutes on Monday night and lead the league with an average time of possession of 37 minutes and 43 seconds.

And for those who may have been brainwashed by Chip and think it's all about the number of plays and not time of possession? It's a small sample size, but the Eagles are averaging 70.5 plays per game this season. During their three seasons under Kelly, they averaged 68.4 plays per game.

That, combined with the turnover differential, is why the Eagles beat the Bears handily despite being out-gained 284 yards to 280 yards.

Lastly, we come to the rest of the NFC East. If qualifying the Eagles as one of the "for real" teams in the NFL begins with their ability to compete for playoff spot, then you should feel pretty good about their chances. There's no clear-cut favorite in the division this year, meaning it's more or less up for grabs (just like it has been nearly every season since the Eagles ruled the East back in the early 2000s).

I'm not saying that the Birds are that team. I'm saying they've looked like the best team in the division through two games. It's early, but they clearly don't look like a team that rebuilding or an afterthought in the division like many thought heading into the season.

Furthermore, a schedule that was looking deadly down the stretch is beginning to look more and more doable as the Birds prove to be better than we thought and some of the teams that scared Birds fans -- including the Seahawks and Packers -- look slightly less so through the first two weeks.

As for their division foes, the 0-2 Redskins are quickly becoming a dumpster fire. The Cowboys beat them in Week 2 and appear to have a nice rookie QB of their own in Dak Prescott. But whatever reservations people have about Wentz and the Eagles also have to be applied to Dallas. And then there's the Giants, who are also 2-0. They narrowly defeated the Cowboys on the road in their opener and mustered just 16 points against the 0-2 Saints at home, the same Saints team that allowed 35 points to the Raiders a week earlier. Say what you will about the Eagles first two opponents, but at least they handled both with relative ease.

And six of the Eagles remaining 14 games come against those three teams, with the first coming in Week 6 against Washington.

As you can see, there are plenty of reasons to believe this team is for real. What we don't know yet is whether or not they're going to be spectacular.

We'll certainly find out more on Sunday against the Steelers. But for now, you're allowed to start getting excited.