The bar opened in 1976, and it was featured on the first season of 'Bar Rescue' before it closed five years ago 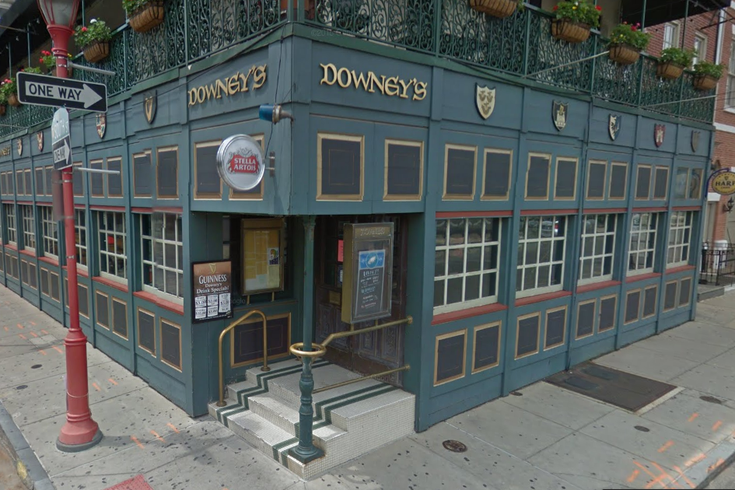 Downey's Irish Pub opened in 1976 at South and Front streets in Philadelphia. The bar closed in 2016, and now the building's days could be numbered. Documents show the city has issued a permit for the demolition of the property.

After sitting empty at the corner of South and Front streets since 2016, the former Downey's Irish Pub building could soon be reduced to rubble.

Documents filed with the Department of Licenses and Inspections show the city issued a permit for the demolition of the bar – which encompasses 526 S. Front St. to 109-11 South St. – to property owners CWMW Lending LLC on July 7. The building was purchased for $1.15 million at a sheriff's sale in 2017, according to OCF Realty.

The application to demolish Downey's was filed with the city by Rich Villa of Ambit Architecture, a firm based in Society Hill. L&I records also describe plans to redevelop the site with an attached, mixed-use structure. The first floor of the proposed new building will be commercial space, and above it, the plan calls for 18 residential units. The building will feature a roof deck for residents, a cellar and six dedicated bicycle parking spots.

The old Downey's property will not be changing owners as part of the new construction, Villa told Philadelphia Business Journal. An attorney representing Ambit Architecture, Vern Anastasio, said the project aims to "breathe new life" into an area that has "been long neglected for quite some time."

"I was asked to file the appeal so we could get the zoning variances needed for what I think will be a sensational new development that will include vibrant commercial and residential space, which will be a nice change for that spot because it's been dead for far too long," Anastasio told Philadelphia Business Journal.

Downey's opened in 1976, and its original owner, Jack Downey, sold the property in 2003 to his chef, Domenico Centofanti, according to the Inquirer.

Centofanti's ownership was eventful to say the least; in 2005, his brother shot and injured their mother and then killed himself in the upstairs apartment while diners ate Mother's Day brunch. Centofanti filed for bankruptcy in 2010, and the next year Downey's appeared on the first season of "Bar Rescue" after being temporarily shut down for health code violations.

Jon Taffer's efforts to save the bar were in vain. According to the Inquirer, Downey's liquor license was put into safekeeping on Nov. 1, 2015, meaning it could not legally serve alcohol. When Downey's closed for good in 2016 in the face of a sheriff's sale, Centofanti owed the city $80,712.43 in taxes and interest he had accrued since 2013.

The founder of OCF Realty, Ori Feibush, told Philadelphia Business Journal that the area around Downey's "is desperately needing draws that can bring in and help create traffic for the commercial corridor there."

"There's little you can do with existing housing stock or available real estate to generate the density and foot traffic you need to have a viable commercial corridor at this point," he said. "Historically there was one, but I don't see a scenario where that's possible at this point."