Philly nonprofit offers options for those without a computer 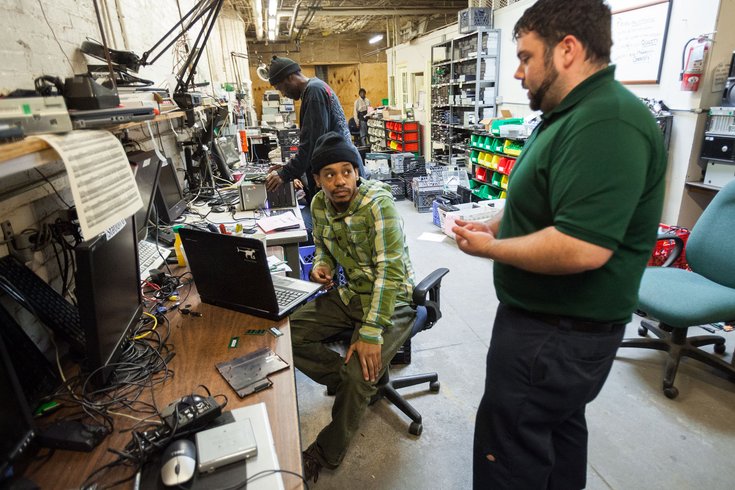 Matthew Callo, right, lead technician at Nonprofit Technology Resources works with Angelo Williams, an employee in the BEST program to diagnose a technical problem with one of the computers.

Imagine trying to apply for a job, do research for school or take an online course if you don't own a computer.
“More and more jobs and applications are moving online,” said Tracy Gray, a managing researcher at American Institutes for Research. “So, if you don’t have access to the technology tools to complete that application, once again, you are out of luck.”
Nonprofit Technology Resources, a Philadelphia-based organization founded in the 1970s, wants to help those who don’t have access to a computer get one. The nonprofit provides individuals with low-cost options at its retail store, with prices often ranging between $100 and $250, and, at times, gives computers away for free to those in need, many of whom are Philadelphia-area students.
“We don’t actually just give [kids] the computer, we also give them the class to teach them how to use it,” said Matt Callo, the nonprofit’s lead technician.
The organization is also taking part in Philly Tech Week, an annual gathering of those focused on innovation. This year, Tech Week will take place from April 17 to 25. Nonprofit Technology Resources will host four events, including a computer giveaway, in part to raise its profile and do outreach, according to executive director Steve Feldman. The organization runs a 14,000-square-foot refurbishing warehouse in Spring Garden and sells or gives away between 1,100 and 1,500 computers a year. The high-volume nonprofit wants to double that, Feldman said.
And it is NTR's goal to do so in Philadelphia, where technology spending lags and where there are fewer technology devices available to students than in many other metro districts, according to a study by the Council of the Great City Schools quoted in the Notebook. The city also has a higher poverty rate than many other comparable cities, ranking behind places like Baltimore and Chicago, according to a recent Pew survey.
For those without the resources to easily invest in technology, the impact can be widespread. In addition to the increasing number of job applications that have to be filled out online, basic education also increasingly relies on the Web.
“If you have a student who does not have access to the technology at home, they are clearly at a disadvantage,” said Gray, who added that owning a computer is becoming an ever-increasing requirement for education. “Students are really on a very regular basis being sent to Web-based resources for their homework.”
To tackle the technology gap, Nonprofit Technology Resources has had to rethink its offerings in recent years after Pennsylvania pulled funding for the job training program offered by the nonprofit to certain people on welfare. According to the organization’s publicly available tax forms, NTR's revenue was cut almost in half, largely by this change.
“We did lose a significant chunk of funding,” Feldman said.
On many days, anywhere from three to 15 people work to refurbish and mend computers that were donated by individuals or companies. 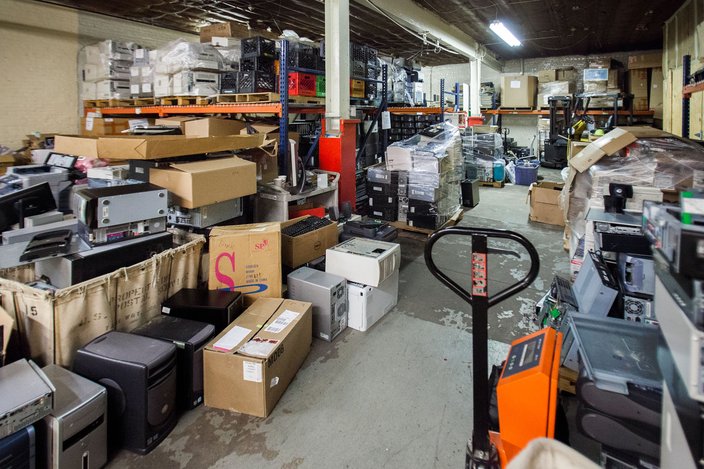 The Nonprofit Technology Resources warehouse, which is filled with donated computers. Thom Carroll/PhillyVoice
One of those workers is Angelo Williams, a 31-year-old engaged father of three. On a weekday in early April, he was stationed in a large rectangular room in front of a pile of computers that needed his attention and expertise in order to be rebuilt. The room is one of many partitioned spaces throughout the warehouse designated for tasks varying from storing hardware to teaching.
Williams has an internship, which ends around the same time he graduates from ITT Technical Institute in June. He said it will help position him for a job that pays a bit better.
“Before I was in school, I did odd jobs. I actually was a carpet tech,” said Williams. “I just wanted to work a 9-5 and be home with the family and kids, and I wanted a pay increase.”
It is this refurbishing effort, and the sales of more computers, that Feldman is focused on as the nonprofit’s future. He has a number of ideas about how to make the operation work more seamlessly.
“We have, for a long time, had every individual doing everything,” said Feldman. “We are moving toward a process where we have more of an assembly line.”
He cites the nonprofit’s retail operation as an opportunity for growth.
“There are plenty of places where you can buy a computer for between $100 and $200 but not quite so many retail for people who are not savvy with ordering from the Internet,” Feldman said.
Because NTR is a nonprofit, it gets reduced rates on Microsoft products, Feldman said, which helps keep costs down on the computers it sells.
Feldman said about half of the computers make their way out the door through the store, a large chunk are given to clients who work in the shop as payment, and others are given away.
For programs that seek to increase access to technology, it takes more than just providing discounted pieces of machinery, according to John Horrigan, a senior researcher at the Pew Research Center.
“The difference is fairly substantial if people have had training,” said Horrigan.
In addition to having access to a computer, an individual should also be instructed on its usefulness and how to operate it, said Aaron Smith, also a senior researcher at Pew.
Nonprofit Technology Resources said it wants to find the funds to provide more computer training, but the nonprofit does offer a few hours of instruction to those who are given computers, Feldman said. For example, the training ensures that those receiving the technology know how to activate the warranty that is provided and use the Internet without getting a virus.
In addition to selling computers, the nonprofit advertises affordable Internet options on its website to help customers get online.
“[Nonprofit Technology Resources] has had a bit of a roller coaster,” said Feldman. But now, he said, finances have stabilized, and there is a plan to increase sales. But to do that, “we have to become well-known and become appreciated.”