According to Rubin, Brinkley isn’t allowing Mill to leave Pennsylvania and attend Game 1 of the Sixers’ playoff series with the Raptors in Toronto.

“Judge Genece Brinkley - I know you have a vendetta against Meek Mill and are obsessed with trying to control every aspect of his life, but did you really NOT approve him to go to rep the sixers in Toronto for the game? Do you also hate PHILLY? As soon as the schedule came out, Meek asked probation for approval- they immediately approved! (YES FOR EVERYONE WHO DOESN’T UNDERSTAND, MEEK MUST STILL GET THE JUDGES APPROVAL PERSONALLY EVERYTIME HE LEAVES PA SINCE HE’S STILL ON PROBATION 12 YEARS LATER FOR A CRIME HE DIDN’T COMMIT) We filed w/your court as soon as the schedule came out since you need to approve travel to Canada! Since you didn’t respond to numerous phone calls and emails we even sent a lawyer to the courthouse today!! AND MOST IMPORTANTLY IF THIS HAPPENS TO MEEK, WHAT DO YOU THINK HAPPENS TO THE AVG PERSON ON PROBATION??”

PhillyVoice has reached out to Mill's representatives at Atlantic Records for more information, and will update this story if we hear back.

RELATED: Round 2 Preview: Joel Embiid has to solve the Marc Gasol problem

Brinkley’s status on Mill’s case has been contentious for some time: last spring, Mill’s legal team requested for Brinkley to be removed from the case over unfair treatment, but Brinkley was not removed.

On Friday night, rapper, Toronto native, and Raptors brand ambassador Drake — who famously had beef, which has since been squashed, with Mill — took to Instagram to make a plea for Mill’s allowance into Toronto: 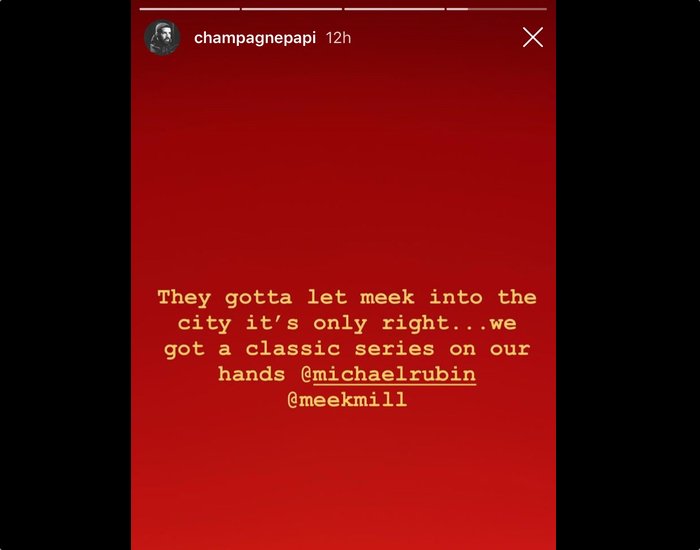 Mill has been omnipresent at Sixers games, and in Philadelphia, since his dramatic release from jail during the team’s 2018 playoff run.

Mill has spent the last year pushing for probation reform on his own and through his new lobbying group, The Reform Alliance.