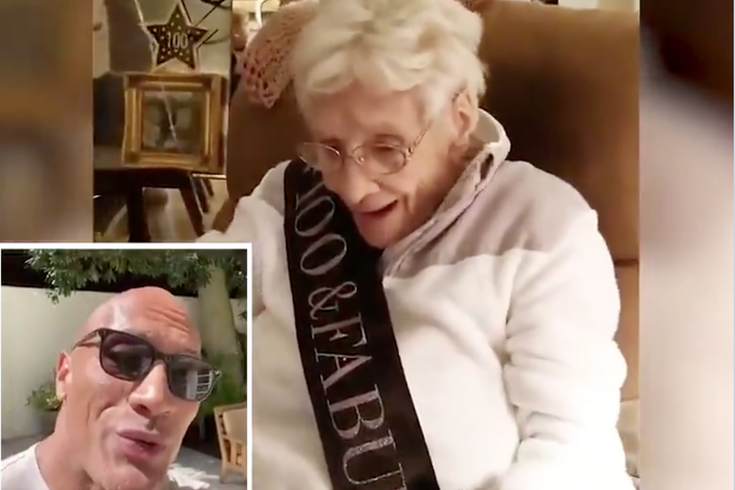 All-around cool dude Dwayne 'The Rock' Johnson heard about a Philly woman who was about to turn 100 years old, and also happened to be an enormous fan of his, so he recorded a video of himself singing 'Happy Birthday.'

Dwayne "The Rock" Johnson has established himself as one of the universe's kindest people over the course of his career.

If you need any more evidence, turn your attention to his latest good deed: He heard about a Philly woman who was about to turn 100 years old, and also happened to be an enormous fan of his, so he recorded a video of himself singing "Happy Birthday."

We'd say more, but it's probably best if you start by watching the video, because it's the best:

This is one of the rare cases of social media improving something neat, rather than exacerbating something bad.

Jamie Klingler, a Philly native who lives in London, reached out to Johnson's publicist ahead of her grandmother Marie Grover's 100th birthday with the long-shot idea of connecting her grandmother with the acting giant, according to BuzzFeed News.

MORE: Watch first trailer for 'Recorder', about the Philly woman who recorded 30 years of TV news

On Sept. 22, Klingler tweeted about the plan, and Johnson somehow noticed her tweet:

What?? First I’m hearing of this! Who’s turning 100? Beautiful age! What do you need, Jamie?

The odds of Johnson noticing a single mention on his flooded social media channels are astronomical, so already this was a special occurrence.

Incredibly, Johnson recorded a video of himself wishing Grover a happy birthday and sent it to Klingler, who then forwarded it to a friend who still lives in Philadelphia. The friend showed Grover the video, and filmed the new centenarian's reaction.

Unsurprisingly, the resulting video went extremely viral, and Johnson chimed in once more to put a neat bow on an extremely pleasant celebrity interaction:

Love seeing this. Happy 100th Grandma Grover! I’m honored you’re a fan and grateful you were born! Much love, Rock.
(wish my grandma was still around, but stuff like this is always the best part of fame) #phillystrong 💝 https://t.co/EvuKAbuULT

What a world we live in.