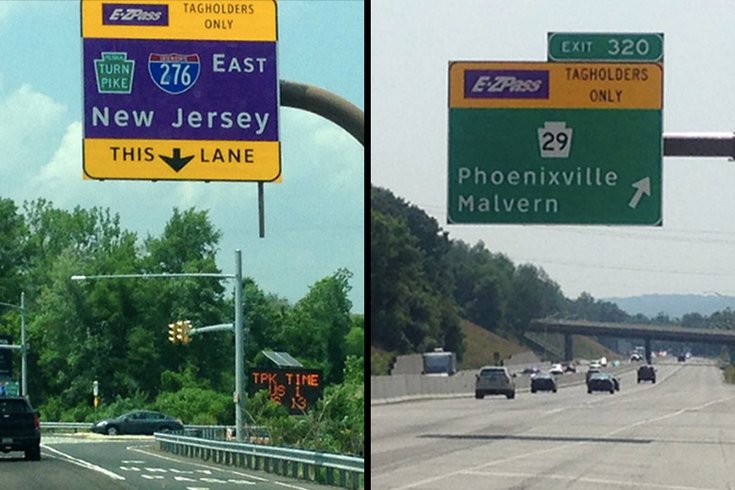 There are six E-ZPass only exits along the Pennsylvania Turnpike. They include Exit 352 in Bucks County (left) and Exit 32 near Route 29 (right).

I finally caved in and got E-ZPass this summer. Sure, it’s a time-saving blessing in transit to and from the shore. And sure, it came about despite that nagging “the feds will know where I am and how fast I’m driving at all times” paranoia.

Well, benefit outweighed cost considering our phones and those unmarked helicopters are far more worrisome than a windshield transponder.

But something else has been gnawing away at my moral code while riding along the Atlantic City Expressway or Pennsylvania Turnpike in recent weeks, though.

It boils down to the age-old "Haves vs. Have Nots" battle. Specifically, E-ZPass Only exits strike me as divisive at best and emblematic of a compu-caste hierarchy at worst.

Sure, I can use them. Anyone with an E-ZPass can. But should the latter caste stand idly by as highway overlords restrict the routes upon which our E-ZPassless fellow citizens can travel?

I’m here to declare that the answer should be a resounding “No!” with emphasis on the exclamation point.

Granted, this isn’t exactly a new development in the world of transportation.

In 2010, Exit 17 on the Atlantic City Expressway opened as an E-ZPass only entity with a $3 toll at the eastbound on-ramp and westbound off-ramp. The rationale? “To create efficiencies there and to implement some upgrades in our toll technology."

The results? Sure, it restricted potential Egg Harbor Toll Plaza spurners from hopping on and off to avert payment. It also meant that non-E-ZPassers would have to head on down to Exit 14 and back-road it to “points of interest” including the Renault Vineyards and Millville Army Airfield Museum.

The Pennsylvania Turnpike system features six EZPass only exits, and five of them are in our immediate area.

“In very general terms, I can tell you that slip ramps/all electronic interchanges are typically used to link specific business areas to the Turnpike or provide ready access to developing areas,” explained Rosanne Placey, the turnpike’s manager of media and public relations.

“There is generally a compelling economic development need and local push for designated slip ramps," she continued. “Additionally, studies in those areas would typically show a high level of E-ZPass users from the feeder zip codes.”

That’s all well and good, but they’ve also been pricey for those who used them without E-ZPass, and, well, just flat-out inconvenient, even if they only add 5, 10 minutes to someone’s commute.

Over on the Garden State Parkway, things are a little more egregious than in Pennsylvania or at that A.C. Expressway outlier.

When the Parkway opened its glorious, $73 million southbound Exit 125 in Sayreville this summer, it was an “E-ZPass Only” entity.

"If they don't want to use [Exit 125], they have the option of using the same ramp they use today for the same price they pay today," New Jersey Turnpike Authority spokesman Tom Feeney told the Asbury Park Press late last year.

O rly? I mean, sure, there are options like Exit 124 less than two miles away, but it’s the principle of the thing that matters most.

Someone who doesn’t have E-ZPass should not be forced to drive a longer distance to get somewhere that someone who has E-ZPass can go quicker.

I mean, I get it. There are cash savings and traffic filtering benefits to this since high-speed tolls can process two to three times the number of vehicles in an hour.

Still, why not just mail people a non-discounted bill for the regular toll rather than using an exit that’s been deemed off-limits to commoners? Charge them a mailing fee to cover any additional expenses. That's more fair than fining them for using as exit reserved for the VIPs of the road.

It matters not how many people have E-ZPass.

It matters that one demographic is being given preferential treatment over another because they decided to sign up to put a tracking device in their vehicle.

Don't tread on citizens who choose not to allow E-ZPass into their lives.

This is not what the Founding Fathers envisioned for America.