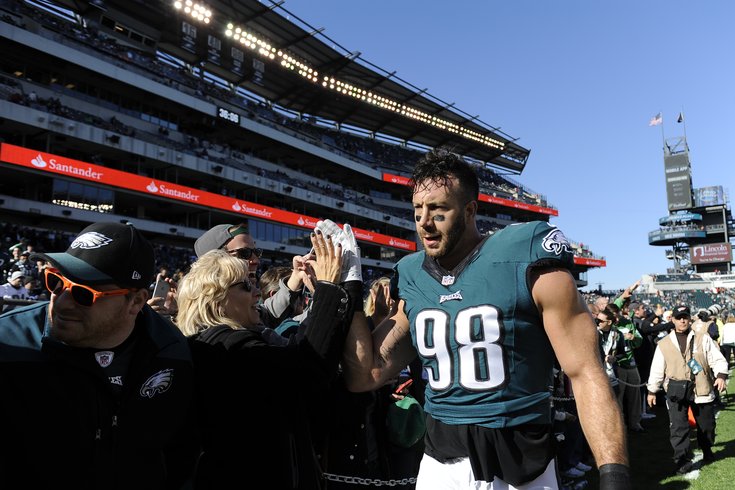 The Philadelphia Eagles' defense will have a totally different look to it in 2016 when the Birds transition from a two-gapping 3-4 defense to a attack-style 4-3. That change will have the greatest effect on the Eagles' defensive linemen.

Speaking on 94.1 WIP way back in January, Jim Schwartz said some things worth getting fired up about.

"We’re not gonna be a two-gap 3-4," he said. "I want those defensive lineman to be attacking. I want those guys to be creating and wreaking some havoc and putting pressure on the quarterback. They’re not gonna be playing at the line of scrimmage and grabbing guys and trying to keep the linebackers clean. I think we have some good guys up front. We can take the handcuffs off of them a little bit and get some more production out of them."

That is music to the ears of Fletcher Cox, Bennie Logan, Vinny Curry, Brandon Graham, and even Connor Barwin.

"I was very fortunate in Tennessee to have Jevon Kearse, to have Albert Haynesworth, to have Kyle Vanden Bosch, to have Kevin Carter, Robaire Smith, some really talented players up front," said Schwartz in a different interview. "In Detroit, we drafted that way. Ndamukong Suh, Nick Fairley, brought in Kyle Vanden Bosch, had Cliff Avril. Went to Buffalo, had Jerry Hughes, Mario Williams, Marcell Dareus, Kyle Williams, as talented of guys as you're ever going to be around."

Schwartz gave his former players credit for being talented, however, the numbers suggest that Schwartz helped their pass rush numbers significantly. Below are the 13 players Schwartz mentioned, and the number of sacks they had per 16 games with him, and without him.

As you can see, 11 of the 13 players above got to the quarterback more frequently with Schwartz than without him. You can probably expect the same out of the Eagles' defensive linemen this year as well.

Let's take a look at the Eagles' defensive linemen, individually:

Cox is easily the best player on the Eagles' roster. He is a dominant, disruptive force who had 71 tackles, 9.5 sacks and three forced fumbles a season ago as a defensive end in a two-gapping style defense that typically hinders statistical accomplishments. As noted above, in the Eagles' new 4-3 scheme, Cox will have more leeway to attack upfield and go after the quarterback from his new defensive tackle position.

Logan is a very unheralded player but played very well early last season before some injuries derailed him a bit. His domination in the preseason games was almost comical. Logan is on the final year of his deal, and should be a man possessed this season. (Not that he doesn't work his ass off as is).

Logan was an unselfish player at LSU, and then again with the Eagles through his first three years in the league, content to eliminate offensive linemen and open up opportunities for other players to make plays. This will be his first chance in a long time to be a penetrating disrupting force, and I believe he has the skill set to be just that.

Barwin's fit was perfect as a 3-4 outside linebacker, as he was a complete player. He could play the run, drop into coverage, and rush the passer. While some of Barwin's skill set may be wasted in a 4-3, the transition to 4-3 DE should be a snap.

Many have wondered whether Barwin should be moved to the SAM linebacker spot. My buddy Tommy Lawlor at IgglesBlitz.com wrote a great piece on why Barwin should absolutely be a DE in Schwartz's scheme.

There's an argument to be made that no player's talents were as wasted the last three seasons as Curry's, who produced at a high level whenever he got playing time. In the Eagles' 3-4 scheme, Curry was relegated to sub package work, getting in the game only on obvious passing downs.

In the Eagles' 4-3 alignment, Curry should see his snaps increase dramatically. Curry's best season came in 2014 when he posted nine sacks and four forced fumbles while getting on the field for less than a third of the team's defensive snaps.

In my view, Graham doesn't get enough credit for making the difficult transition from 4-3 DE to 3-4 OLB, actually playing a lot better than many thought he would despite a lack of eye-popping stats. Graham made himself into a more complete player, learning how to effectively play the run and even drop into coverage, which was something that not many thought he'd be able to do. He'll be moving back to his more natural fit as a 4-3 DE, where he can just put his head down and rush the passer.

Through two seasons after being selected in the first round of the 2014 NFL Draft, Smith has 13 tackles and 1.5 sacks. Time is running out for him to begin to produce.

After a decent rookie season with the Tennessee Titans in 2012, Martin's productively has been nearly non-existent. In 2015, he played five games, and then did not appear at all in eight straight games before being placed on injured reserve at the end of the season.

Coming out of college at Michigan, Martin was a highly athletic, but undersized defensive tackle. He put up extraordinarily impressive numbers at the 2012 NFL Combine:

Martin's signing could be an indication of the type of quick, athletic defensive linemen the Eagles will begin targeting to play in Jim Schwartz's defense.

Allen is entering his third year with the team after being selected in the seventh round of the 2014 NFL Draft. In two seasons, he had 38 tackles and 0.5 sacks in a reserve role. At 6'2, 333, Allen was a good fit as a run-stuffing NT in the Eagles' former 3-4. Can he make the transition to a penetrating 4-3 DT?

Again, Hart was a member of the 2014 draft class, and he was clearly brought aboard to be a two-gapping 3-4 defensive end. Chip ... any interest?

McCalister is a rookie seventh-round draft pick, and an intriguing talent. At Florida, he was able to get to opposing quarterbacks with his size and athleticism, however, he lacked an impressive repertoire of pass-rush moves. Additionally, he didn't often finish tackles strongly, he was often slow to recognize fakes, and at 240 pounds he was easily moved in the run game.

In the pros, McCalister is going to be a situational pass rusher only, unless he can improve the rest of his game drastically. And even in that limited role, he's going to have to develop more pass rush moves.

McCalister has obvious physical traits, but a long way to go before he can contribute consistently in the NFL. I would project that he'll be a "redshirt IR" guy, a practice squad player, or if the team is afraid he'll get poached, he'll make the team but be inactive.

Braman will likely make the team as a special teams standout, but will not see the field in the regular defense barring an emergency. Braman's value on the punt block team cannot be understated.

• Steven Means has some intriguing ability at DE. He could be a sleeper to make the roster if guys like Marcus Smith falter.

• Destiny Vaeao, Aziz Shittu, and Connor Wujciak are undrafted rookie free agents the Eagles brought aboard after the draft. Of the three, Vaeao received the most meaningful reps in OTAs.