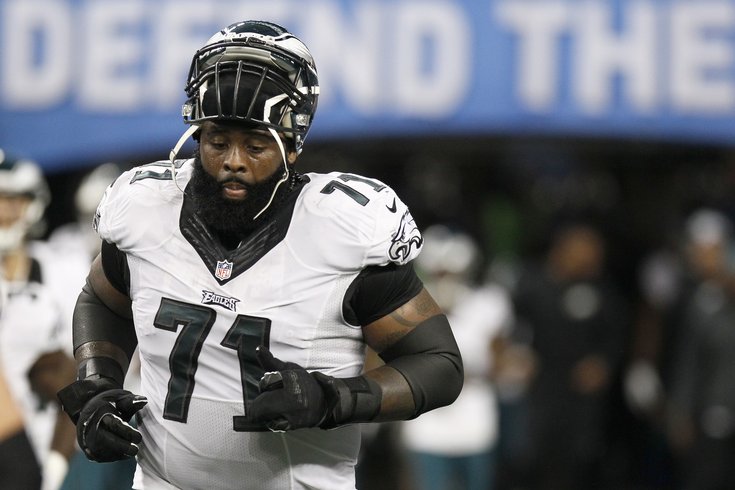 Enjoy Jason Peters while you still can.

The Philadelphia Eagles offensive line underwent the beginnings of a transformation this offseason. The Birds added OG Brandon Brooks in free agency, and then drafted a couple offensive linemen for the first time since Lane Johnson was selected fourth overall in 2013. Because the Eagles had such a long gap in between drafting offensive linemen, they became the oldest offensive line in the NFL, at an average age of 29.2 years old.

Throughout OTAs and minicamp, the Eagles' starters looked like this:

Barring injury, you can mark down four of the five spots above in ink. The only starting spot seemingly up for grabs is at LG. Let's take a look at the starters individually, and then we'll try to sort out the Eagles' OL depth.

Peters is a borderline Hall of Famer, but he battled injuries a season ago and his career is clearly in decline. The Eagles have the most cash spending toward the 2017 salary cap in the NFL by a wide margin, and they are going to need to clear up space next offseason. In 2017, Peters will be 35 years old with a cap number of $11,200,000. The Eagles would save $9,200,000 if they released or traded him.

Meanwhile, this offseason, the Eagles gave Lane Johnson a five-year contract extension worth $56.25 million ($11,250,000 per season). The next closest RT in the NFL makes $6,750,000 per season. Johnson won't be playing RT very long at that number.

It's a near certainty that this will be Peters' last season with the Eagles, so enjoy him while you can.

Back in May, Doug Pederson named Barbre the starter at LG.

"Right now it is Allen Barbre's job," he said, "and I think again that's something we did through the draft and a little bit of free agency is to kind of shore up that spot. I really like where we're at. I like the depth at that position right now. But yeah, Allen Barbre is my guy and he's our starter."

Barbre did not play well a season ago, and he's now 32 years old. He also counts for $1,950,000 on the cap in 2016, $1,650,000 of which the Eagles could save if he were to be cut or traded. It would be a significant benefit if one of the Eagles' younger and cheaper options were to outperform Barbre and win that job outright in camp. It's somewhat puzzling why it's Barbre's to lose.

Kelce had a bad season a year ago, and he'd probably be the first to acknowledge that. However, Kelce has been a good player in the past, and he's still only 28 years old, so there's reason to believe he can bounce back.

It's somewhat noteworthy that the Eagles selected Isaac Seumalo in the third round of the 2016 NFL Draft, and signed Stefen Wisniewski in free agency. While Seumalo is working at LG (for now), his primary position in college was center. Meanwhile, Wisniewski has started every single game he has ever played in the NFL (77 of them), with his primary position being center as well. That could be a motivating factor for Kelce.

In 2015, the Eagles' lack of quality guard play often stalled their rushing attack and allowed interior pass rushers like Ndamukong Suh and Gerald McCoy to wreck games. Guard was as glaring a hole on the Eagles' roster as you'll find. The acquisition of Brooks will drastically upgrade one of the guard spots.

One of the things the Eagles' offensive line has lacked for quite some time is an interior lineman who can move defensive linemen off the line of scrimmage against their will. Brooks can be that for the Eagles.

As noted above, Johnson is almost certainly going to be the Eagles' LT in 2017, but for now, he'll play out one last season on the right side. Johnson is already a really good player. With youth and incredible athleticism, he'll only get better.

Seumalo was the third-round selection of the Eagles in the 2016 NFL Draft, but he has yet to practice with the full team, as his school (Oregon State) runs on the quarters system. Therefore, we haven't yet gotten any kind of look at him yet. Doug Pederson said that Seumalo will be working specifically at LG, which is the lone spot seemingly up for grabs along the offensive line. That's a good sign for Seumalo to have a legitimate chance to win that job.

It's worth noting that rookie offensive linemen started for Pederson's Kansas City Chiefs in each of the last three years:

Seumalo represents the best chance for an Eagles rookie to start in 2016.

In OTAs, Wisniewski was working as the second team center. As noted above, he has 77 starts under his belt in the NFL and has never been a backup. He represents legitimate competition for Kelce, as well as very solid depth along the interior of the Eagles' offensive line. Wisniewski could also be a contender for the starting LG job.

In 2012, Doug Pederson was still the Eagles' quarterbacks coach. There are only four offensive players from that roster who remain with the team -- Jason Peters, Jason Kelce, Brent Celek, and... Dennis Kelly!

Every year, Dennis Kelly gets written off, and every year he makes the team. The Eagles drafted Kelly to play in the system that Pederson is bringing back to Philly, which bodes well for his chances to survive yet again in 2016. To take it a step further, it wouldn't surprise me at all if the Eagles view Kelly as the first OT off the bench. During OTAs and minicamp, Kelly was working as the second team RT. In the event Johnson went down, you just plug Kelly right in at RT. In the event Peters went down, the Eagles could move Johnson over and again, just plug in Kelly at RT.

Tobin was projected to win a starting guard spot a season ago, but he was beat out by Andrew Gardner in camp. Tobin then started 13 games at RG after Gardner was lost for the season with an injury. It did not go well.

This offseason, the Eagles have kicked Tobin outside, as he has been working as the second team LT behind Jason Peters, which is mildly interesting. Tobin is more athletic than he is powerful, so kicking him out to the edge makes sense.

Gardner won the Eagles' starting job at RG last season, and he has OT/OG versatility. Working against Gardner is the fact that he's now 30 years old on a team that clearly has its eye toward the future.

Vaitai, the Eagles fifth round selection, plays a position where the Eagles' starters are very clearly set, with Johnson and Peters in place. The Eagles also have a number of reserves with NFL starting experience, which means that Vaitai isn't likely to be the first guy off the bench should something go wrong.

It's more likely that the Eagles are trying to groom Vaitai to become a replacement for Johnson at RT whenever Johnson takes over for the aging Peters at LT. Vaitai is a good bet to make the team, but he'll likely be a inactive on game day. (If the entire country would like to run with "Vaitai inactive" stories for the next month, that would be wonderful, thanks).

Andrews made the team a season ago, and stuck around for the entire season. With a new coaching staff and better backup competition in place, he'll have to re-prove himself in 2016.

Greene was a road-grating guard in college who moved defensive linemen off the line of scrimmage in the run game. He was a Combine invite and thought of as a late-round prospect. During his tenure at San Diego State, he tested positive for marijuana and was suspended for six games. However, according to NFL.com, he was contrite for his mistakes, and "came back to start the final seven games of the year, helping the team produce two 1000-yard rushers for the first time in school history."

Greene received the most guaranteed money among any undrafted rookie free agent in the NFL this offseason. That should at least guarantee him a spot on the practice squad.

Bunche was on the Eagles practice squad for the entirety of the 2015 season. In OTAs, he worked primarily with the second team offense at LG, although it should be noted that Isaac Seumalo was absent.

Jones was with the Eagles a season ago, and was working with the second team offense at RG during OTAs.. He has 10 games of playing experience (no starts) with the Rams in 2013 and 2014.

Johnson won the Rimington Award for being the top center at the FCS level. According to Mark Emmert of the Portland Press Herald, Johnson played every snap the past three years.

Johnson worked with the third team offense at center in OTAs.

Gordon, who is listed at 6'4, 322, entered OTAs as a tight end, wearing number 83. The Eagles then moved him to the offensive line. He now wears number 69.