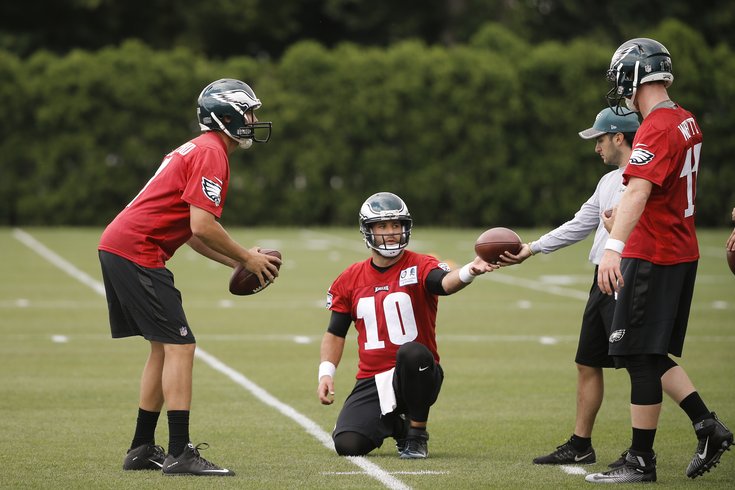 If you're a Sammy Sleeves supporter, soak up as much of him as you can now.

The Eagles used a lot of resources to move up in the 2016 NFL Draft to select Carson Wentz, and there's little question that he will be the face of the franchise ... eventually. However, in 2016, as Doug Pederson noted, there's a good chance Wentz will start the season watching games from the sidelines in street clothes, as he will likely be inactive on game day at the start of the season. As the season goes on, who knows?

For now, the Eagles' quarterback depth chart looks like this:

“I wanted Sam on this roster way back even when I was hired," said Doug Pederson. "One of the first things I did was evaluate his game last year and really liked what I saw. All intentions were, and are, he comes in being the No.1, being the starter. My feelings haven’t changed there whatsoever.”

While Bradford is atop the food chain for now, all three quarterbacks received an equal number of reps throughout OTAs and minicamp. That is an extremely rare trend that is expected to continue at the start of training camp, with Bradford seeing his reps increase as the season draws nearer. Expect to see a ton of Wentz in the preseason games.

If you're a Sammy Sleeves supporter, soak up as much of him as you can now. If you're not, take solace in knowing that he'll soon be flipped into a draft pick as long as he doesn't tear another ACL or throw 20 INTs this season.

At some point, Wentz will make the jump from QB3 to QB1, with Chase Daniel holding firm as QB2. It's only a matter of when.