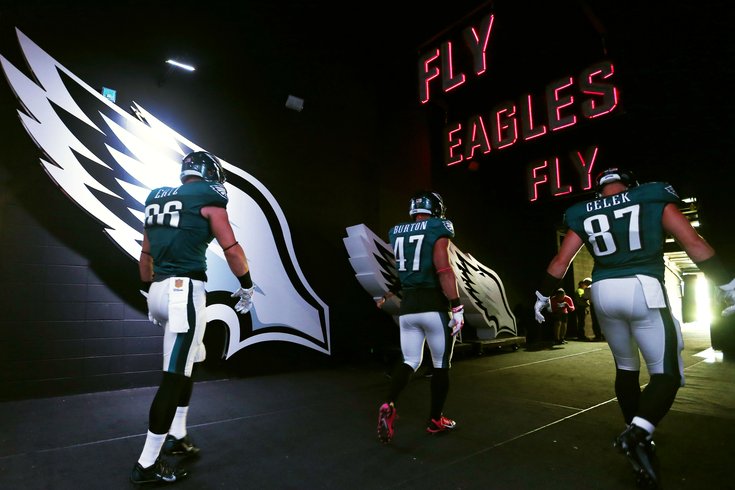 Zach Ertz, Trey Burton, and Brent Celek form one of the best tight end trios in the NFL.

Ah, finally we come to a position of strength on the Eagles offense. Unlike at quarterback, running back, and wide receiver, there is true reason for optimism in 2016 at the tight end position, where the Eagles have talented starters as well as quality depth.

Back in January, the Eagles locked up Zach Ertz through 2021 on a five-year extension worth $42.5 million. A day later, they signed Brent Celek through 2018 on a three-year deal worth $12 million.

Over the last three seasons, Chip Kelly's offense employed a heavy dose of three wide receiver sets, which did not play to the personnel strengths of his players, at least in 2014 and 2015. To be determined if Doug Pederson employs his tight ends more than Kelly did.

Let's take a look at each tight end individually:

As we noted in our Eagles fantasy football preview, below is a list of every tight end in NFL history who had at least 2000 receiving yards after their first three seasons in the league:

Ertz is one of 17 tight ends in NFL history to achieve that. Also, apparently Walter White was a football player before he became a chemist / drug lord.

A look at Ertz's stats year-by-year through three seasons:

A season ago, Ertz was dealing with a sports hernia injury which slowed him down early on. Over the last four games, Ertz caught 35 passes for 450 yards.

The area where Ertz hasn't produced is in the end zone, but there's really no discernible reason why he shouldn't. All indications are that Doug Pederson's system will attempt to be as quarterback-friendly as possible, whereas Chip Kelly's offense centered around the running game. With that premise in place, since Ertz is more of a receiving threat than a punishing blocker it's reasonable to conclude that his playing time should increase, and he may become more of a focal point of the Eagles' offense in 2016.

In 2015, Celek had 27 catches for 398 yards and three TDs. Ertz was a bigger threat in the passing game, but Celek was clearly the best blocking tight end on the team. With two (maybe three) quality tight ends on the roster, the Eagles may seek to get both Ertz and Celek on the field more than in previous years, especially with a dearth of intimidating wide receivers.

Celek is 31, and the only skill position player left on the roster from when Pederson was still with the Eagles in 2012 as the quarterbacks coach.

Trey Burton's lack of playing time under Chip Kelly always baffled me. In training camp and the preseason, Burton looked like a legitimate weapon in the passing attack, but for whatever reason he never got opportunities in games that mattered. I remember the Thanksgiving debacle against the Lions, when Burton had a catch and run of 43 yards in the first quarter:

My reaction after that play:

OK, good play Trey. You're done for the day now.

And sure enough, that was pretty much it for Trey until the Eagles were down by 38 in the fourth quarter. Playing behind Ertz and Celek on the depth chart, it's not as if Burton is going to get 400 or so snaps this season, but certainly his skill set warrants some kind of role in this offense.

As we noted in our latest 53-man roster projection, Chris Pantale was the pleasant surprise of spring practices, as he made several difficult catches and was getting the majority of the reps whenever the Eagles used a fullback. He has an excellent chance of making the roster as a fourth tight end, but will have to show he can be physical when they put on the pads.

The final tight end on the roster is MJ McFarland, who has a steep uphill climb to make the team.