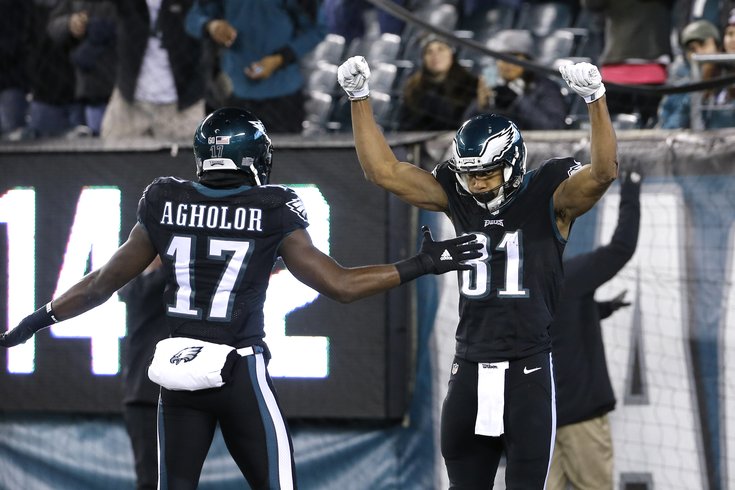 Jordan Matthews celebrates a TD that cut into a 37-10 deficit against the Cardinals.

Clearly, the Eagles' wide receivers must be much better in 2016 than they were in 2015. Miles Austin and blocker extraordinaire Riley Cooper are both gone, which is a good start, but they weren't the only culprits last season when it came to dropped passes. (As an obligatory reminder, the Eagles led the NFL in drops last season).

The Eagles' crop of wide receivers heading into camp in 2016, much like in 2015, is very young. Unfortunately, the Birds don't have any receivers with a 1000-yard season to their credit.

Below are the ages of the five receivers most likely to make the team:

Let's look at them individually:

Matthews is a very good player who is likely to make a boatload of catches over a long NFL career. However, his coaches to this point in his career have not shown that they want him playing on the outside. Should his career continue along that path, he can be a premier slot receiver, which of course isn't the worst thing, but may be his ceiling. We'll see if Doug Pederson and Co. expand his role in 2016.

Over his first two seasons in the NFL, Matthews has impressive numbers -- 152 catches, 1869 yards, 16 TDs. He is also a tireless worker, constantly trying to improve his game.

Agholor's rookie season was a clear disappointment. There were some (self included) last preseason who thought Agholor could contend for Offensive Rookie of the Year honors. Oops. Agholor played in 13 games (starting 12), and produced just 23 catches for 283 yards and 1 TD.

On the final day of minicamp, Agholor seemingly proceeded directly from the NovaCare Complex to Cheerleaders Gentlemen's Club, where he was accused of rape. No charges will be filed against Agholor, however, he will certainly face distractions in the aftermath of that incident.

Agholor has talent. There were certainly glimpses of it in the preseason a year ago, as well as in the final meaningless game in the Meadowlands against the Giants. Look at the burst here:

In other words, maybe Agholor is a player who just needs some time to adapt to new surroundings before he'll realize his potential? That's certainly a more optimistic view than, "He's just not good."

There was a time that some in the Eagles organization thought that Huff had a higher ceiling than Jordan Matthews. I'm not sure anyone thinks that anymore. Huff, like Agholor, has had moments where he has shown explosiveness, like here:

Unfortunately, those moments have been too few and far between. Huff has the ability to be a good runner after the catch, but he still lacks polish as a receiver. During OTAs and minicamp, we cited Huff as a player who did not impress, as he had a number of drops.

Randle spent the first four seasons of his career with the Giants, posting the following decent numbers:

Last season, in two games against the Eagles, Randle had nine catches for 123 yards and a TD.

Randle has good size at 6'2, 208, and his numbers have generally gotten better as his career has progressed. However, he has also developed a reputation as a poor route runner, and was often blamed for some of Eli Manning's interceptions.

In OTAs and minicamp, Randle didn't show much, although he missed some time after having gallbladder surgery. He'll have the chance to compete for a starting job.

Givens had a very productive season as a rookie, but his career has been on a downward trajectory since. His numbers:

The Eagles don't have much in the way of receivers who can stretch the field vertically. Givens ran a 4.41 40 at the 2012 Combine and he has a 16.6-yards-per-catch average for his career. He also has three years of experience playing alongside Eagles quarterback Sam Bradford.

Graham was formerly a third round pick (69th overall) of the Buffalo Bills in the 2012 NFL Draft. After fizzling out in Buffalo, Graham has been with the Tennessee Titans, New York Jets, and New Orleans Saints. The Eagles are Graham's fifth team in as many years in the NFL. His career numbers:

The rest of the bunch

As every team does every offseason, the Eagles brought in a handful of undrafted rookie free agent wide receivers, some other street guys, and they return one receiver from last season. This year, they are Jonathan Krause, who was on the team a year ago, as well as Cayleb Jones, Hunter Sharp, Paul Turner, Xavier Rush, Marcus Johnson.

Seemingly every year, an off-the-radar receiver becomes a camp darling, but undrafted wide receivers don't make the team as often as you might think. By my count, over the last 10 years, only Damaris Johnson (2012) and Hank Baskett (2006) made the team as undrafted free agent receivers, and in Baskett's case, the Eagles traded former third round pick Billy McMullen for him.