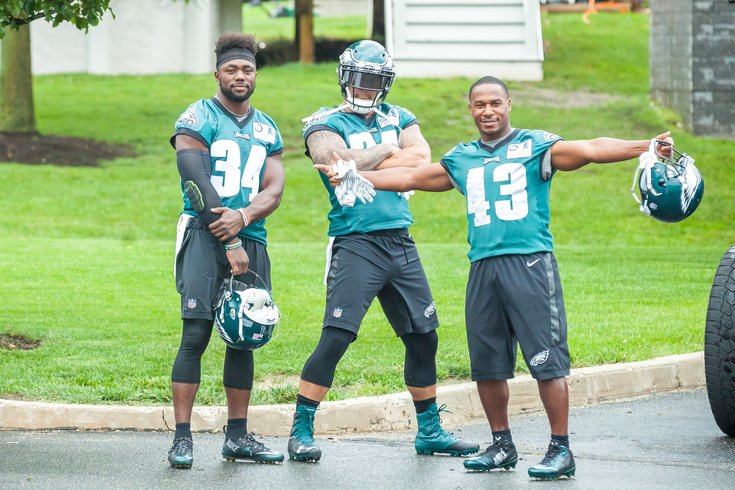 There's a decent chance that Kenjon Barner, Ryan Mathews, and Darren Sproles will all be elsewhere in 2017.

The Eagles' running back situation heading into training camp this season is less than ideal. The top four running backs currently on the Eagles' roster are Ryan Mathews, Darren Sproles, Wendell Smallwood, and Kenjon Barner. Of the four, there's a good chance that only Smallwood will be back with the team in 2017.

Let's take a look at each of those four backs individually:

This offseason, both Mathews and DeMarco Murray were on the trading block. The Eagles were going to trade one and keep the other. When they traded Murray, Mathews became the lead back, out of necessity.

When Ryan Mathews got playing time last season, he was very good. He carried the ball 106 times for 539 yards (5.1 YPC) and 6 TDs, which made him the most productive runner on the team. We stress that he was a good "runner." Mathews had some spectacular moments, like this one in Carolina.

It was later revealed that Mathews made this run with a tweaked groin. However, Mathews was not good as a receiver, having more than his share of ugly drops, like this one in Atlanta.

Mathews is not a great fit for Doug Pederson's offense. Pederson has said that he wants to be able to move his backs around to create mismatches for opposing defenses in the passing game. That is not at all a strength of Mathews'.

As we noted in the quarterback training camp preview, the Eagles have the NFL's least amount of available cap space in 2017 and 2018. If the Eagles release or trade Mathews next offseason, they will save $4,000,000. The Eagles don't necessarily want Mathews long term, and yet they're kinda screwed in 2016 without him in the short term. In that sense, as we noted in our Eagles dumpster fire piece, Mathews is kind of like the Sam Bradford of running backs.

Sproles missed the voluntary portion of Eagles offseason workouts. The coaching staff genuinely didn't seem to to be too concerned about that. Unlike Mathews, Sproles is a very good fit for an offense that plans on using its backs heavily in the passing game.

Expect Sproles to used more creatively in Pederson's offense than he was in Chip Kelly's, but likely only for one year, as Sproles is 33 years old and in the final year of his deal.

Smallwood was a fifth-round selection of the Eagles in the 2016 NFL Draft, and a player Pederson seems to really like. In OTAs and minicamp, Smallwood showed an ability to be a weapon as a receiver out of the backfield, which again, feels like a prerequisite in Pederson's scheme.

The area where Smallwood needs the most work is in pass protection, a deficiency of his that we showed in greater detail back in May. Duce Staley will have the task of coaching Smallwood up in that regard before the Eagles can trust him to play in regular season games.

Barner, in my view, will head into 2016 Eagles training camp on the bubble to make the final 53-man roster as he was a year ago. In the preseason game against the Colts last year, Barner had a 93-yard punt return for a touchdown that unquestionably helped him secure a spot on the team.

While he showed a glimpse of playmaking ability against the Colts in August last season, Barner did not take full advantage of his opportunities in the regular season a year ago.

The biggest mistake was against the Patriots. The Eagles had a seven-point lead and the ball at the New England 28 with just over a minute to go. The Patriots had no timeouts and no hope. The one and only thing you cannot do in that situation is fumble ... and that's what Barner did.

Barner was fortunate that the Eagles defense got a stop on the ensuing Pats drive, but that is really just an unforgivable play.

As a receiver, Barner struggled. He caught nine passes on the season, and couldn't make much happen with them after the catch, gaining just 22 yards (a 2.4 YPC average) and one first down. He also had three drops on passes that are as easy as it gets in the NFL.

Barner's 2015 season is, of course, a small sample size, but there were far too many glaring mistakes for the amount of time he got to play.

With an injury prone starter at running back and a pair of backups in Sproles and Smallwood who are not built (or ready) to be three-down backs, the Eagles need a reserve who can be competent as a runner, as a receiver, and in pass protection. Barner must show the new coaching staff that he can do all three consistently. So far, I just haven't seen it.

The Eagles have a pair of undrafted free agent running backs on the roster in Byron Marshall (Oregon) and Cedric O'Neal (Valdosta State).

The Chiefs' offense under Doug Pederson featured a lot of jet sweeps, which would play well to Marshall's skill set. He is a versatile player who can play running back, wide receiver, and return kicks, however, he obviously wasn't so good at any of those three things to be drafted. He obviously fits the bill as a running back with receiving ability.

On an Eagles team that again, only has one running back almost certain to be on the roster in 2017, there is a very good opportunity for Marshall and/or O'Neal to at least earn a spot on the practice squad, and maybe more.

Oh, and don't rule out the possibility of the Eagles adding a veteran running back to the mix.

In case you're wondering what the 2017 NFL Draft looks like at running back, it's likely going to be loaded with talent.