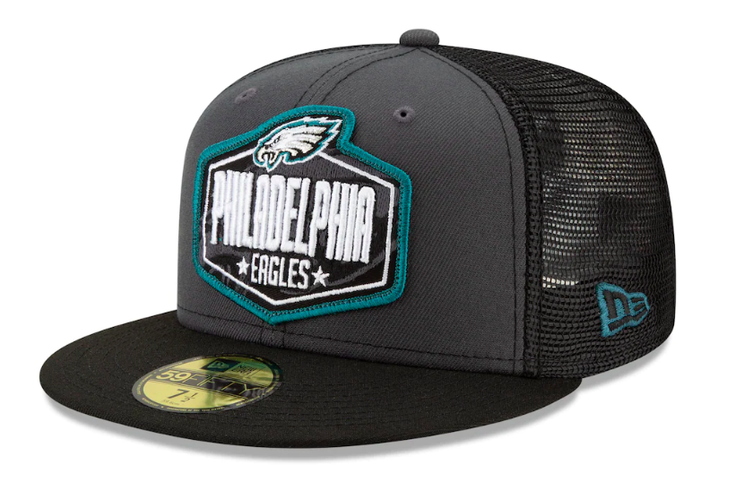 The Philadelphia Eagles hold the 12th overall pick in the 2021 NFL Draft, which begins on Thursday, April 29. The player the Eagles select will be wearing this hat to celebrate.

The 2021 NFL Draft is less than three weeks away — and while the rapid-fire mocks continue, we now have a tangible symbol of what awaits us on April 29.

The NFL released official draft hats for all 32 teams Friday, going with a pretty classic look compared to some of the cheesier designs of years past. Both the 2018 design (which said "Fly Eagles Fly") and the 2019 design (which included the "Philadelphia Maneto" city seal on the brim) were a bit too gimmicky. The 2015 design with the city skyline on the underside of the brim was pretty sharp, by comparison.

This year, the NFL took a standard approach with all 32 teams, but made the bold decision to switch to mesh panels in the back. Some people may find this chintzy, but it's a breathable look and lighter on the head. You don't get as much sweat and matting, for what it's worth. They're available in fitted, flex or snapback designs, ranging from $33.99 to $39.99.

Here's a look at the rest of the NFC East teams.

As a practical matter, this is mostly exciting because of the prospect of whose head this hat will be gracing in the first round, where the Eagles hold the 12th overall pick after trading back from 6th to add draft capital in 2022.

This is both a hugely important and incredibly interesting draft for the Eagles, who aren't often this high on the draft board without trading up. The positional combination they choose in the first two rounds will be telling. The trade back likely suggests they have faith they can add good value with their second round pick, whether they keep it or use it to move around.

The excruciating part of this year's draft will be watching the Dallas Cowboys pick at 10th overall and the New York Giants pick at 11th, barring any other trade activity. If either of Philly's rivals select a player the Eagles (or their fans) had targeted, and they become stars, it's going to be unpleasant considering the Eagles could have stood pat at 6th overall. The full picture won't become clear until after next year's draft.

But regardless of who the Eagles select in this year's draft, we can take comfort in the fact that the backs of their heads will stay cool.