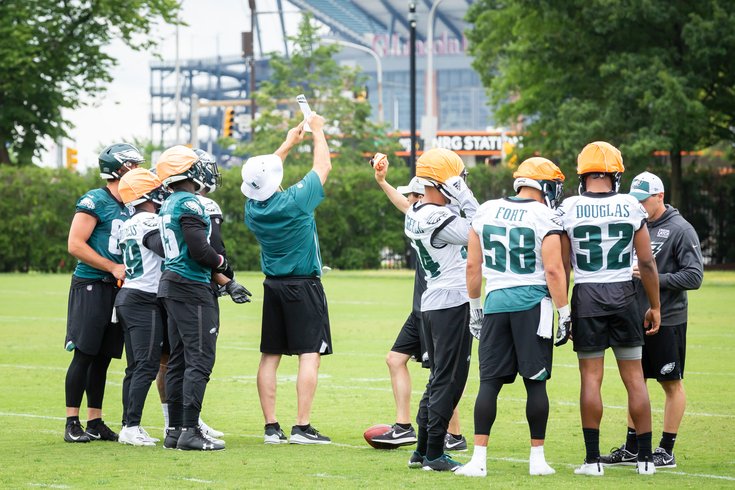 Eagles players take a break from practice to check to see if they've made Jimmy Kempski's projected 53-man roster.

Philadelphia Eagles spring practices are in the books. Well, almost. There's one more short practice to get through on Thursday, but barring some kind of major injury, nothing that happens today will change my opinion on a projected 53-man roster. Anyway, here's what I got heading into the summer.

Before spring practices began, I was pretty adamant that the Eagles would not cut Thorson, unless he was absolutely atrocious all throughout the offseason, seeing as he was a fifth round pick in a draft in which the Eagles only had five picks.

There's no doubt that Thorson's head is swimming as he tries to learn a new playbook, but the early returns haven't been great. He'll need to show something in training camp or the preseason, but for now, I'll still confidently keep him on.

Neither Clement nor Sanders practiced at all during the spring, so we saw a whole lot of Howard, Scott, Wendell Smallwood, and Donnel Pumphrey.

Smallwood is unspectacular, but he is certainly NFL roster-worthy, and the Eagles have needed him every year he's been in the league. He's a safer fourth running back than Josh Adams, who still has practice squad eligibility, and who also oh-by-the-way was missing from practice. He'll be back on when someone gets hurt during training camp. He'd be my "54th guy."

Scott's value is as a punt returner, assuming he can show in the preseason games that he's trustworthy.

The first four guys are locks. Meanwhile, Hollins should be safe as well, assuming he is able to participate fully in training camp. He got some work in during the spring, and at a minimum, is a core special teamer.

The Eagles could certainly keep six receivers. Shelton Gibson, Greg Ward, and early camp darling Marken Michel would be my top contenders for that sixth spot if they did.

Maybe the Eagles keep a fourth tight end if they think they're going to utilize a lot of two-TE sets. I don't see it at this point.

The Eagles are loaded along the O-line, especially at offensive tackle. The idea that the Eagles will trade Vaitai is becoming less and less likely, as the "starting RG while Brooks is out" job seems to be his to lose.

As far as Brooks' return goes, the Eagles will likely put him on the PUP list before training camp begins, but I think he'll come off of it at some point before the start of the season.

Sweat has emerged as the early favorite to win the fourth DE job over Miller, Daeshon Hall, and Joe Ostman, as he has had a strong offseason program. Miller will get a year to develop behind the scenes.

During his post-draft press conference, Howie Roseman stated that the Eagles have been trying to trade for Ridgeway for a while now, and they were finally able to get him during the draft. More recently, Jim Schwartz noted Ridgeway as a guy who has stood out early.

The Eagles may keep six linebackers. Obviously, we only have five here. Paul Worrilow has had his knee "flare up" at times this offseason, according to linebackers coach Ken Flajole, so we'll leave him off. Flajole also said that T.J. Edwards (Wisconsin) and Joey Alfieri (Stanford) of two of the best undrafted linebackers he has had in camp the last four years. Of course, no undrafted linebackers have actually, you know, made the team during that span.

If there were a sixth linebacker who could crack the roster, my bet would be Edwards.

I think there's a chance that the Eagles trade one of their corners (cough... Sidney Jones... cough) before the start of the season. If not, they'll roll with these six corners.

I left Sendejo off the last version of this, as I think that a fourth-round compensatory pick is more valuable, but the team seems to like him, so I reluctantly replaced Blake Countess with him.