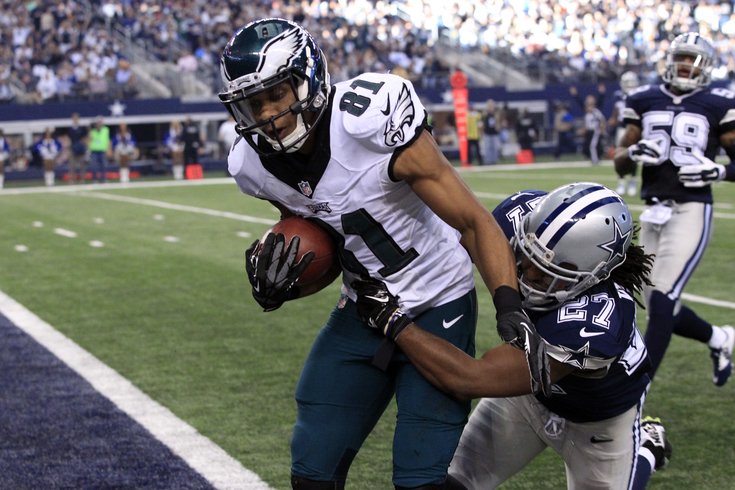 With the NFL's free agency period and the draft in the books, NFL teams will continue to tweak their rosters, but for the most part, we can make educated guesses at this point on who each teams' projected starters will be. With that in mind, let's take some inventory on Eagles' players' ages, broken up by positional groups, starting with the offensive skill positions.

Here are all 32 of the NFL's projected starting quarterbacks in 2015:

From a league-wide perspective, the above chart shows that 46.9% of the NFL's projected starting quarterbacks are over the age of 30. Kickers, punters and long snappers aside, that is by far the highest percentage in the NFL. In you want to have a long career in football, be a quarterback. That's good advice for getting girls, too.

Once you get below the age of 30 on the above list, there aren't many good, proven quarterbacks. There's Russell Wilson, who benefits from an elite run game and the best defense in the NFL, and Andrew Luck. Beyond Luck and Wilson, it's a collection of players who have varying degrees of "potential," which is a polite way of saying "Ain't done much yet." Sam Bradford is a player with "potential."

Bradford is the 19th oldest projected starting quarterback in the NFL. For those of you down on Bradford as your team's starter, there is some consolation in that the best quarterbacks in today's NFL are old fogies. However, the counter-argument to that is that nine of the twelve Super Bowls that were won by the quarterbacks listed were won when they were 27 years of age or younger:

Many of the best NFL quarterbacks had serious injuries, and went on to play extraordinarily well after their recoveries. The Eagles hope Bradford can recover from his two torn ACLs. But in terms of age, while it feels like Bradford has been around for a long time, he is only a little more than year older than Nick Foles. If Bradford can stay healthy, which is an enormous "if," there is certainly time for him to become a good pro QB.

Here are all 32 of the NFL's projected starting running backs in 2015. To note, I also included Darren Sproles and Ryan Mathews, just to show where they would rank by comparison:

As noted above, if you want to have a long NFL career, be a quarterback. Don't be a running back.

Only four projected starting running backs are over the age of 30, and none are 33 years of age or older. Chip Kelly doesn't seem to care about age in running backs. The Eagles traded for Darren Sproles, who would be the second oldest back on the list above, and they tried to acquire Frank Gore, the oldest player on the list.

DeMarco Murray is the 13th oldest projected starting running back on the list above. While his age isn't a concern at this time, the fact that he is coming off a season in which he had nearly 500 touches is. To be determined if he is the same player he was a year ago in Dallas.

Here are all 32 of the NFL's projected starting wide receivers in 2015. While collecting data for this exercise, figuring out who was each team's third wide receiver was often very difficult. I consulted with writers for the teams in question for most of the questionable third receivers listed below, but I'll bet that there will be disagreement on some of the choices below. Apologies in advance.

For the Eagles, I used Jordan Matthews, Nelson Agholor, and Josh Huff, although that is certainly up for debate. It is not a lock that Riley Cooper will even be on the roster, while it is with Huff. I think the Eagles would love to see Huff earn that third spot in training camp, and ultimately, I think he will. But to be clear, that is merely a projection.

Of this extremely young positional group, no NFL team is younger at their 1-2-3 WRs than the Eagles, who currently average 22 years of age, narrowly edging out the Jaguars (22.3).

Obviously, the Eagles released DeSean Jackson, the 29th oldest 1-2-3 WR in the NFL, and let Jeremy Maclin (39th) walk in free agency, which undoubtedly helped prompt the Eagles to use quite a bit of their draft resources on the position the last two years.

In 2014, from the day he walked into the NovaCare Complex after he was drafted until the final game against the Giants, Matthews worked almost solely out out the slot. He almost never lined up outside.

As a rookie he excelled in his role, catching 67 passes for 872 yards and 8 TDs. It would be foolish for the Eagles to use their best receiver in a role that would limit his snaps to three wide receiver sets. It appears the Eagles see it that way too. Zach Berman of the Inquirer talked to Matthews , who confirmed that his role will increase in 2015:

"I think you would think that I might get a whole lot more outside reps now just because Maclin is gone, but I already had talked to coaches, and they were already going to implement me more on the outside as opposed to just the inside regardless," Matthews said. "I don't think that's a crazy, huge deal."

The Eagles have a young and intriguing set of receivers, although obviously, Agholor is a rookie and Huff didn't see the field much in 2014. The Eagles think very highly of both players. They reportedly turned down an offer from the Broncos, who wanted to trade up to the Eagles' spot at 20, but the Eagles opted to draft Agholor instead of acquiring more picks. As for Huff, there are some with the Eagles who think he has a higher ceiling than Matthews. Obviously, Matthews has a far higher floor.

If this trio pans out, the Eagles will be set at wide receiver for a long time. If not, they'll be using more valuable resources on this group. I would lean toward the former.

Here are all 32 of the NFL's projected starting tight ends in 2015. To note, I included both Brent Celek and Zach Ertz, just to show where they would rank by comparison:

Brent Celek's receptions, yards, and first down catches have declined (or stayed the same) in each of the last four years.

Celek is the best blocking tight end on the team, but his blocking ability doesn't warrant the $5 million he'll count against the cap in 2016 if he continues to be less and less productive as a receiver. There's a strong argument to be made that Zach Ertz should start in favor of Celek in 2015, but he probably won't. But obviously, at 24 years of age, Ertz is a another young weapon to complement the Eagles' young receiving corps.

Next up: The offensive line (GASP!)