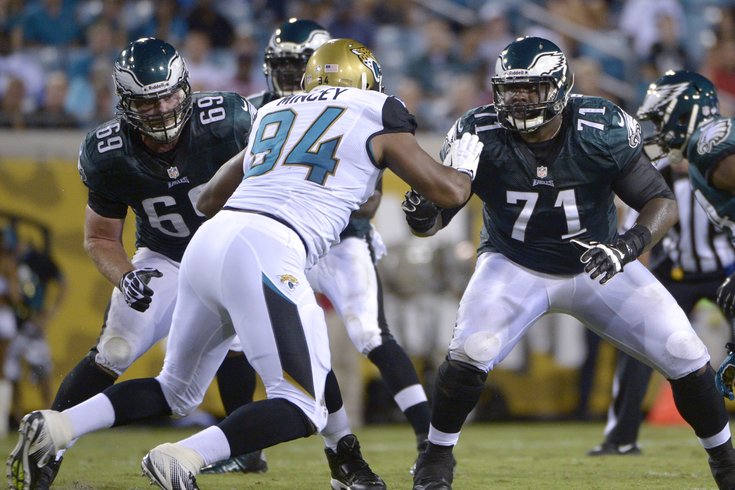 Evan Mathis is the oldest projected starting offensive lineman in the NFL. Jason Peters is the third oldest.

With the NFL's free agency period and the draft in the books, NFL teams will continue to tweak their rosters, but for the most part, we can make educated guesses at this point on who each teams' projected starters will be. With that in mind, we've begun taking inventory on how the Eagles compare at various positional groups, age-wise, to the rest of the NFL. Earlier this week, we took a look at the offensive skill positions. Today we'll focus on the offensive line.

If you follow my work, you're probably tired of my Eagles offensive line articles, as I published two of them earlier this month:

This will be my last one on the topic. Probably. But I completely understand if you're tired of reading about it. If so, my advice would be to just skip this one.

Let's start by publishing the average age every projected starting offensive line in the NFL, sorted in order from oldest to youngest:

As you can see, the Eagles have the oldest offensive line in the NFL. They are also the only team with three projected starters over the age of 30. Only seven teams have two. 13 teams have none.

When you have the oldest projected starting offensive line in the NFL, and three starters over the age of 30, it would probably be a good idea to re-load with some youth along the OL to prepare for the imminent decline of those players. However, over the last three years, the Eagles have drafted the fewest offensive linemen in the NFL, with just one. The NFL average during that span is 4.125 drafted offensive linemen per team.

Over the last two years, the Eagles are the only team in the NFL not to have drafted an offensive lineman.

There is a perception by some that offensive linemen play deep into their 30's, and therefore guys like Jason Peters and Evan Mathis should have plenty of tread left on the tires. Data shows that this is simply not the case. Of the 160 projected offensive line starters, not a single one is 34 years of age of older. This closely mirrors what I have found when I've done this study in each of the last five years.

Did any of the above teams take action in the 2015 draft to prepare for the above players' imminent declines?

• Andrew Whitworth, Bengals (2nd oldest OL): The Bengals drafted a pair of offensive tackles in the first and second rounds, in Cedric Ogbuehi of Texas A&M and Jake Fisher of Oregon.

• Logan Mankins, Buccaneers (4th oldest OL): The Buccaneers drafted a pair of offensive linemen in the second round in OT/OG Donovan Smith of Penn State and OG/C Ali Marpet of Hobart.

• Chris Chester, Redskins (7th oldest OL): The Redskins drafted Brandon Scherff with the fifth overall pick, although he'll likely play OT to begin his career. They also drafted OG Arie Kouandjio in the fourth round and took a seventh round flier on Austin Reiter.

• Will Montgomery, Bears (8th oldest OL): The Bears drafted C Hroniss Grasu in the third round.

Most of the above teams only have one aging OL starter, and took measures to try to replace them during the 2015 draft. The Eagles have three, and did nothing.

In the short term, the Eagles will be in decent shape if everyone stays healthy. If they don't stay healthy, they'll be counting on undrafted free agents and marginal NFL roster-worthy players to provide their depth along the OL. It has the strong potential to cost them games, like it did in 2014.

In the long term, the Eagles don't have much to be excited about on their bench in terms of future starters, which is obviously not ideal, seeing as they have three positions where they will need replacements in the immediate future. Replacing three starters on the OL in a short amount of time is extremely difficult, and even IF the Eagles are able to find quality replacements, it'll take time for the new unit to develop rapport, which again, is not easy. Had they added young talent to the mix, those young players could be developed and acclimated to the Eagles' offensive scheme, with an eye toward inserting them in as starters in 2016 or 2017. Instead, the Eagles are going to have to replace a bunch of starters along the OL simultaneously when the older guys experience an inevitable decline.

In other words, I super serial that the Eagles have major age issues along their OL:

Some day, when the Eagles' OL issues come to a head, everyone will say, "Thank you, Jimmy Kempski. You're super awesome. The end."

Next up: The defensive front seven.