Eagles will face Buccaneers in wildcard round of the playoffs 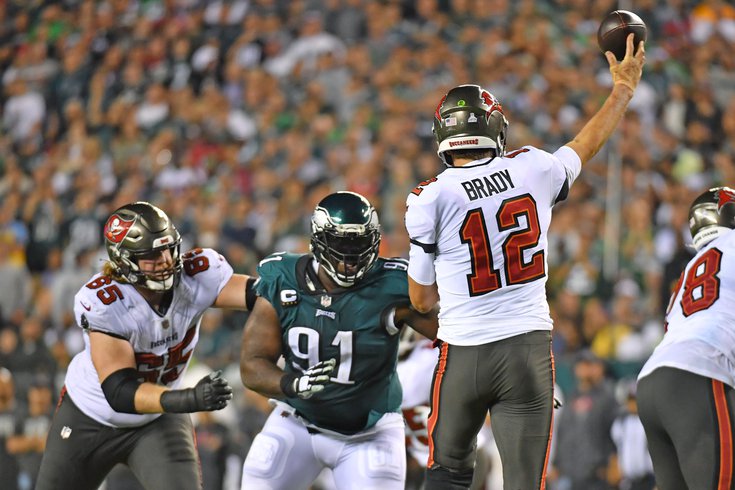 The Eagles will face Tom Brady and the Buccaneers in the wildcard round of the playoffs.

As anticipated prior to the NFL's Week 18 slate of games, the 7 seed Philadelphia Eagles' first round opponent in the wildcard round of the NFL playoffs will be the reigning Super Bowl champion Tampa Bay Buccaneers, who are the 2 seed in the NFC. The date and time of that matchup is still to be determined. We'll update this article when those details are made available. UPDATE: It's a 1:00 p.m. EST kickoff on Sunday, January 16.

The Eagles played the Bucs in Philly Week 6, on a Thursday night. They lost 28-22, in a game that looked a little closer on the final scoreboard than it really was, as the Buccaneers outgained the Eagles 399-213. The rematch in the playoffs will be in Tampa.

The Buccaneers will be a difficult matchup for the Eagles. To begin, they employ Tom Brady, who owns a postseason record of 34-11. He gets the ball out quickly behind a great offensive line, to dangerous weapons in the passing game, even without guys like Chris Godwin (ACL tear) and Antonio Brown, who was recently released.

But also, the Bucs had the No. 1 run defense in the NFL in 2020, and as of this writing, the No. 3 run defense in 2021. Their main objective defensively every week is to stop the run, which is concerning for a Birds offense that relies so heavily running the football.

The Eagles will certainly be heavy underdogs, like they were against Brady in February of 2018.

Should the Eagles beat the Bucs in the first round, the Eagles will play the 1 seed Packers in Green Bay in the divisional round.