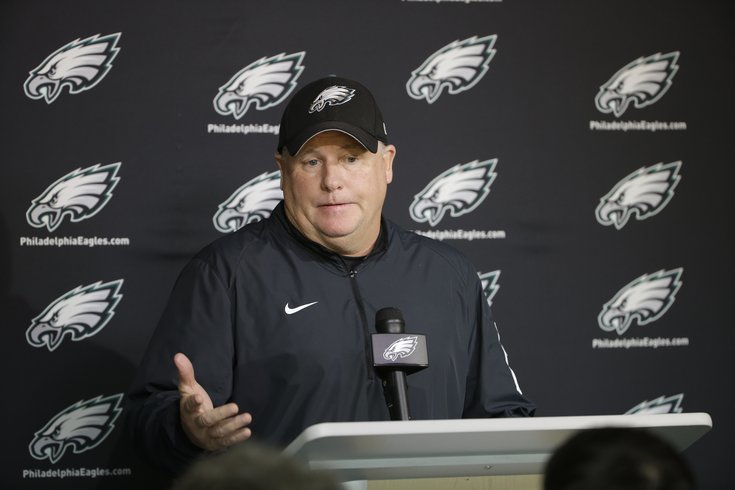 Prior to practice, Philadelphia Eagles head coach Chip Kelly said that left tackle Jason Peters would sit out Thursday's session, while he continues to nurse an injured back that kept him out of each of their last two games.

[UPDATE: You can click here to see Thursday's full injury report, or scroll to the bottom of this post.]

"Jason will not practice today," Kelly said. "He's still going through rehab for his back."

But then, to the surprise of all the media gathered at NovaCare, Peters was out on the field -- the Eagles practiced in the bubble due to weather -- with his helmet on and his ankles taped. The 33-year-old lineman was also going through individual drills during the part of practice we were allowed to watch.

"I don't know about a setback [for Peters]; I just know that he's not going to go today," Kelly added when asked why Peters has been held out this week after being at least limited in practice in the days leading up to the Dolphins game. "So we'll see and monitor him through the weekend here."

"In the limited work he did, I thought he looked good," Kelly said, adding that he was unsure of whether or not the back injury, suffered in their loss to the Panthers, could keep him out longterm. "That's not what the trainers are telling me. [They're saying] that he has a bad back and he can't practice today."

If you want to get technical, Chip wasn't actually wrong in saying that Peters wouldn't practice Thursday. That status is determined by who participates in the team drills, not just the individual or one-on-one drills for which Peters was on the field. However, in the past Kelly has said made that distinction when speaking to the media, usually by saying that a player is going to "try some stuff" or that he's "going to go through individual drills. That would qualify him as a "limited" participant in practice.

This time, he just simply said Peters was out. And then ... there he was on the field.

As individual drills continue, Peters lining up with first team at LT, Johnson on right. He might not do team drills but he's practicing

While it was good to see the veteran tackle out there, that doesn't mean he's going to be in uniform on Sunday when the Eagles face the Bucs. After being limited on Wednesday and Thursday of last week, Peters was a full go during Friday's practice but was not cleared by doctors to play on Sunday.

[UPDATE: Peters will indeed be listed as "limited" on Thursday's injury report.]

Not surprisingly, quarterback Sam Bradford (concussion, shoulder) and running back Ryan Mathews (concussion) have not yet been cleared to return to practice. And it seems like they both still have a ways to go in the NFL's concussion protocol before returning.

"Sam is not lifting; he's not doing anything right now. He's just in meetings," Kelly said of his quarterback, indicating that he's still in the early phases of the protocol.

Based on activity Chip described, Bradford is at 2nd stage of protocol. Next stage would be increased aerobic work/strength training.

Fourth stage is non-contact football activity. Fifth stage is return to play, cleared by independent neurologist. Can it happen next week?

And while we've seen Bradford at least watching the practices from the sideline, we've not yet caught a glimpse of Mathews, which doesn't bode well for his status on Sunday. If he can't go, Kelly said that Kenjon Barner would suit up.

As for Bradford's shoulder injury -- reportedly a separated left (non-throwing) shoulder -- Kelly said he doesn't even know how serious it is.

"I have not had [a diagnosis on Bradford's shoulder]," Kelly said. "The concussion is the No. 1 thing; he can't do anything until he's cleared from his concussion."

Sorry, but I find it hard to believe that the head coach doesn't know the severity of an injury to his quarterback several days after it happened. If it's a long-term thing for Bradford, the concussion would become secondary. But if it's something that could potentially allow Bradford to play this weekend or next -- assuming he clears concussion protocol -- wouldn't Kelly need to know that?

"Because I'm not a medical doctor," Kelly said when asked why he takes a hands-off approach to injuries. "So I think it would be very foolish of me to say, 'Yeah, I don't think he has a concussion, go back out on the field.' That's kind of preposterous, I think."

Meanwhile, WR Josh Huff wasn't practicing on Thursday, a day after leaving practice early. He was not listed on Wednesday's injury report, so we'll see what the team says of his status when they send out the updated one later today.

[UPDATE: After practice, Huff said that he tweaked his back during practice on Wednesday, but it felt better as the night went on. When he woke up Thursday morning, it was sore again so he didn't practice. He thinks he'll be back for Friday's session and said he definitely plans on playing Sunday.]

We'll also see how they classify Peters' participation, as well as that of Connor Barwin, who was sidelined Wednesday with a quad injury but appeared to be back at practice on Thursday.

Here's a look at the official injury report sent out by the Eagles:

Eagles Thursday injury report [and some background on it: https://t.co/JoDTX3Xnya] pic.twitter.com/8ch0XM83tG