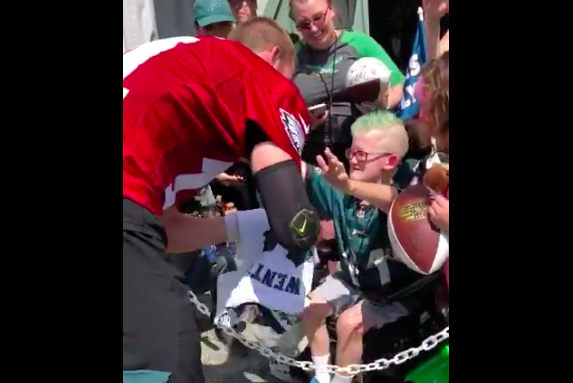 A 11-year-old boy with a rare genetic condition finally got a chance to meet his hero, Carson Wentz, at Philadelphia Eagles training camp on Friday.

It’s not every day you get to meet your hero.#EaglesCamp | #FlyEaglesFly pic.twitter.com/dezSoFcM9J

Giovanni Hamilton was diagnosed at a young age with Schwartz-Jampel Syndrome, a type of dwarfism that has left him with skeletal abnormalities and severe muscle stiffness.

Two seasons ago, during the Eagles' Super Bowl run, Hamilton wound up on the team's radar through a connection with former quarterbacks coach John DeFilippo.

At the time, Hamilton received a phone call from Wentz, Nick Foles and Nate Sudfeld inviting him to attend the final game of the season against the Dallas Cowboys. Hamilton met Foles and Sudfeld, but did not have a chance to meet Wentz.

This time around, Wentz took a moment to connect with Hamilton and gave a him a hug.

The Eagles have taken criticism for limiting the public's access to training camp this year, but the organization deserves credit for helping to coordinate a moment like this for a fan who needs it the most.