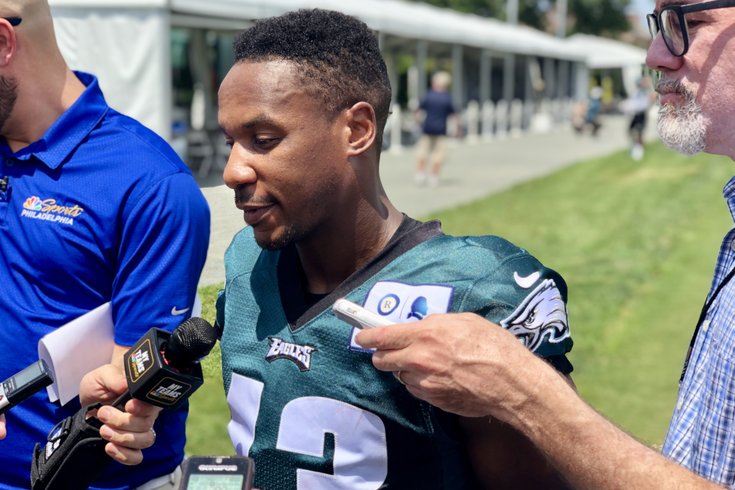 As it turns out, the door was always left ajar for Darren Sproles to return to the Eagles for the 2019 season. But it wasn't until June that the veteran running back decided he would start preparing for a 15th NFL season.

By that point, he had no choice.

That's because Sproles made a bet with his 10-year-old daughter, Devon, who happens to have inherited some speed from her dad. Sproles had maintained that spending more time with his two daughters played a big role in his decision to retire following last season.

But Thursday, on the opening day of Eagles training camp, Sproles revealed that it was also his family that led him back to football.

According to Sproles, the idea of returning had always been on his mind — and the Eagles made it clear to him that if at any point he decided to play for another season, there would be a spot for him in Philly. Sproles said he received calls from about four other teams, but he never considered playing anywhere else this season. So he continued to work out during the offseason, and when the calendar flipped from May to June, Sproles began taking his workouts a little more seriously, adding in some field work to go along with what he was already doing in the gym.

And once Devon, who runs the 100- and 200-meter dashes, held up her half of the bet with her dad, Sproles had to have a conversation with his family about whether or not he was actually going to do this for another season.

"We had a sit-down [in late June], as a family," Sproles said. "And my wife and my kids were like, 'If you still love this game, you might as well get another year, so you can be satisfied.'"

That support meant a lot to the 36-year-old who is sixth in NFL history in total yards. It allowed to him feel free heading into a season in which he has one thing on his mind: a Super Bowl title.

Here's more from his back-and-forth with reporters on Thursday:

How much would it mean to you to go out on top?

Why are you back?

"Because I want that Super Bowl."

You think you'll get it?

Sproles, who missed more than half of last season after missing 13 games in 2017, said that he was willing to do whatever the team asked of him, and perhaps some of that is mentoring second-round draft pick Miles Sanders.

"During practice, he would just ask me about what Duce [Staley] was saying, because they're like this [really close]," Sanders said about his first practice session alongside Sproles. "He was basically asking me what Duce was telling me and then would be like, 'Yeah, he's right.' Little stuff, just like making sure my shoulders were square and stuff, reading the defense and knowing where to go, reading the linebackers and stuff like that. ...

"He's got 15 years in the league, so I'm definitely going to listen to him."

Sanders, who missed time earlier in the offseason, is hardly the only new addition to the Eagles loaded offense. They've also brought in DeSean Jackson and Jordan Howard, as well as drafting J.J. Arcega-Whiteside. And Sproles has noticed. It's part of the reason, along with the culture, that Sproles only had his sights set on returning to Philly, not anywhere else.

Added Sproles, "Once you play here, you don't want to play anywhere else," he said.