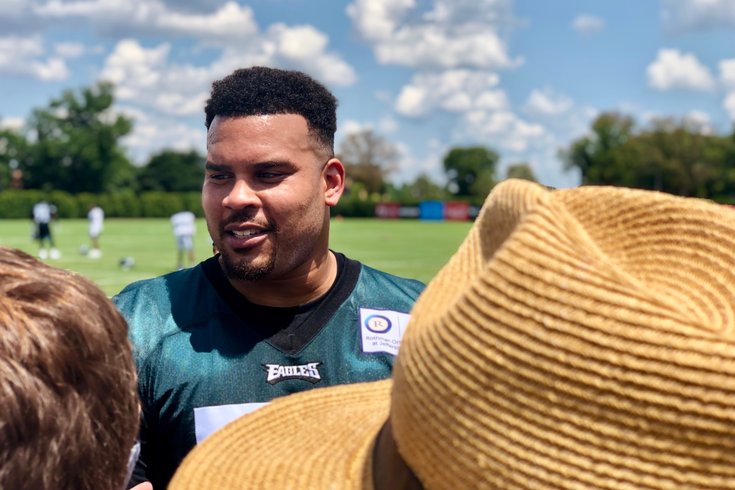 Brandon Brooks will not be on the PUP list this preseason.

Brandon Brooks has started 90 games over the last six NFL seasons. He knew it was too good to be true.

And so, like happens to nearly every NFL player at some point, Brooks went down with a torn Achilles in the Eagles' season-ending loss to the Saints in the divisional round of the 2019 playoffs in January. But Brooks didn't let himself get down. Not even for a second.

"F**k, what am I going to do man?," Brooks said Thursday after a remarkably fast rehab that saw him participate in individual drills as the Eagles opened training camp. "Am I going to mope around and hate life? I have been blessed not to get hurt for seven years — it's part of the game man, it happens. There was never a doubt in my mind it would end my career… it was just, 'When am I going to get back?' I knew it wouldn't take forever. A lot of people were saying it would take a while but it was never a thought."

You might think it sounds like Brooks has been here before and, in a way, he has. Though he never faced a serious physical ailment, the former Texan missed time due to anxiety issues during his first season with the Eagles in 2016. Since then, he's made back-to-back Pro Bowls, won a Super Bowl title and affirmed himself as one of the best offensive guards in the game.

A torn Achilles is typically an injury that requires months and months of rehab. The fact that Brooks is doing any kind of football activity a mere six months after tearing a key tendon for an offensive lineman is a testament to both his work ethic and his mental toughness. But Brooks did his homework too.

"I knew it was going to be f**king hard, playing in the NFL is f**king hard," Brooks said. "I talked to [Jason Peters], he knows about tearing your Achilles when you're a bigger guy. I talked to [former Houston teammate, RB] Arian Foster. He tore his Achilles back in 2014, maybe. I talked to Terrell Suggs about it, he came back in 5 or 6 months, I had to find out, 'What are you doing?'"

It turned out, what Brooks had to do was work. And work he did. The 29-year-old didn't get a chance to leave Philadelphia, as he worked out rehabbing his leg four or five times a week at the NovaCare Complex. Luckily, with most of the NFL on vacation somewhere, he wasn't the only one there.

"I had nothing else to do," he said. "[Ronald] Darby, Rodney [McLeod], Nigel [Bradham], [Fletcher Cox], it was a great group of guys, it makes the rehab better. You get to really know your teammates in the offseason. You have the time, you have nothing really going on.

"I was running the Alter G [treadmill] when I was first able to run. I didn't know guys were paying attention. I was able to run. I got some speed and I turned around and they were all cheering."

Brooks' plan is to continue participating in individual drills for a few weeks before perhaps being cleared to join his team in 11-on-11 drills. He said he didn't really care about playing in the preseason.