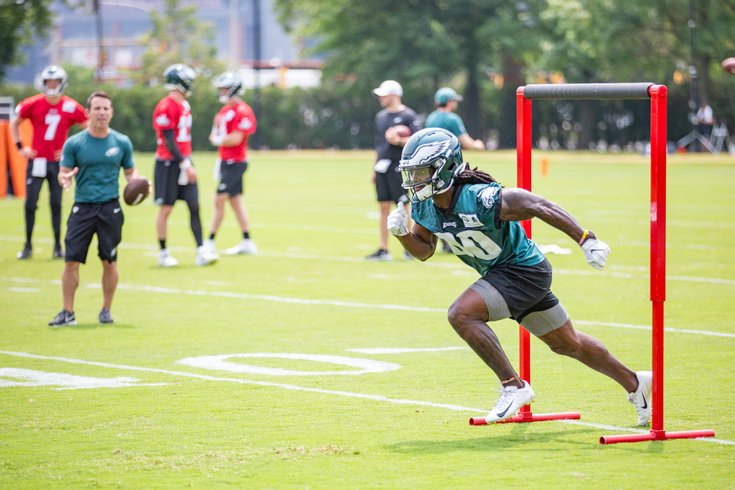 Marken Michel at an Eagles OTA.

The first Philadelphia Eagles training camp practice of the season is in the books, and, well, not much happened. It was a "10-10-10" practice, which just means the defense was giving the offense some looks, and vice versa. It was also super-short, which is common for Day 1. Still, as always, we have notes.

• Before the start of the first practice, the Eagles always announce the players who are on the PUP/NFI lists. This year, only one player appeared. That would be Jalen Mills, as we reported early this morning. This time last year, the Eagles had five players on PUP or NFI. To save you the trouble of googling it, they were Brandon Graham, Alshon Jeffery, Timmy Jernigan, Chris Maragos, and of course, who can forget Bryce Treggs.

Personally, I'm stunned Brandon Brooks isn't on PUP, just six and a half months after tearing his Achilles. During practice, he did some individual drills, but worked out on a side field during team drills. The other "off to the side" guys during team drills were Fletcher Cox, Derek Barnett, Nigel Bradham, Rodney McLeod, Ronald Darby, and Corey Clement.

On the one hand, that's a lot of defensive starters not participating in team drills. On the other hand, everybody on offense except for Clement is a full participant.

And then there's Carson Wentz, who looks healthy, and as many reporters noticed during spring practices, leaner. Wentz acknowledged today that he dropped some weight this offseason, though not necessarily on purpose. He said he has had better nutrition, and the leaner build was a unintentional bonus.

Doug Pederson noted that if the Eagles had to play a game this week, Wentz would be cleared for contact. Last year during training camp, Wentz was rarely a full participant in practice.

• As far as guys who looked good or bad or whatever today, again, boring practice, but a few notes:

Aaaaand that's about all I got for today. We'll have a lot more throughout the rest of camp.