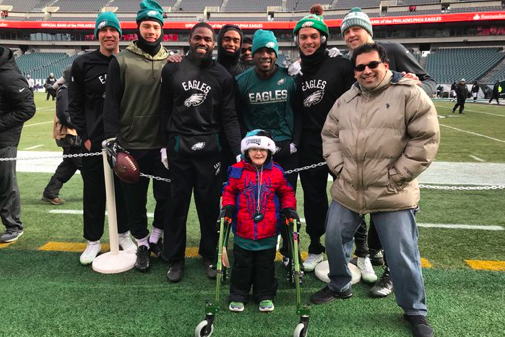 The outcome of the Philadelphia Eagles' final regular season game may not have been pretty, but it was hardly the most important effort the playoff-bound team put out last Sunday.

Prior to the Eagles matchup against the Dallas Cowboys, a special fan had a chance to join some of his heroes on the field.

Giovanni Hamilton, a 10-year-old boy diagnosed with the rare genetic disorder Schwartz-Jampel Syndrome, got a VIP invitation to the Linc from quarterbacks Carson Wentz, Nick Foles and Nate Sudfeld.

Schwartz-Jampel Syndrome, known as a type of dwarfism, left Hamilton with skeletal abnormalities and severe muscle stiffness. His dream to attend an Eagles game caught the attention of activist Lindsay Condefer, who raises awareness for children with craniofacial differences through her lovable French bulldog, Lentil.

Condefer's Facebook page, "My name is Lentil," notes that the same family of genetic conditions responsible for her dog's cleft palette gives rise to the physical and social challenges we in children. Among those who follow the Facebook page are Eagles quarterbacks coach John DeFilippo and his wife, who offered up a pair of tickets to help Giovanni achieve his dream, according to the New York Post.

The Eagles have shown an inspiring commitment throughout the season to raise the spirit of children facing adversity, from Carson Wentz's bracelet to honor the late Lukas Kusters to Chris Long's donation of his 2017 game checks for educational opportunity.

On Facebook, the Hamilton family shared heartwarming photos of Giovanni's big day at Lincoln Financial Field, where the Eagles will hope to carry his energy into the postseason.

Giovanni just hanging out with some new friends! Thank you so much @Eagles for making Giovanni feel so special today! #TeamGiovanni #Eagles #FlyEaglesFly pic.twitter.com/Ce2HMCWdqA