Week 11 NFL picks: Rounding up the experts' predictions for Eagles at Colts 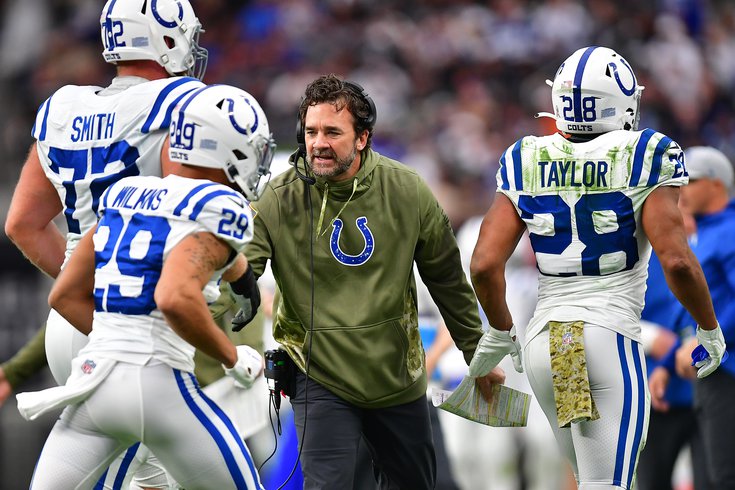 Are things just getting started for Jeff Saturday and the Colts?

The Eagles are looking to bounce back from a loss for the first time all season.

The Colts are riding a high from their first win under interim coach Jeff Saturday and a big day from Jonathan Taylor, going from the league punching bag to the ultimate feel-good story in a matter of days.

Most are expecting the Eagles to be too much to handle for a still underwhelming Indy squad and be right back in the win column.

Nothing like a get-right game to follow the disappointing home loss for our Birds. The problem wasn’t so much a fundamental issue, like not being able to stop the run, so much as the entire coaching staff getting nervous and blowing up their identity. It’s too easy to say the Eagles need to run, or stop the run, so looking at this week expect some fine-tuning – but also some conservative plays.

The Eagles are on the road in a non-conference game against a coach making just his second appearance on the sidelines. It would be a colossal failure for this team to have Jeff Saturday and his cronies outcoach this group. Expect a healthy dose of what got the Eagles here, but they are also on the road, so only in bursts. The Colts will run as much as possible but the human turnover machine – Matt Ryan – will do what he does best. [PhillyVoice]

What's everyone else thinking?

• Inquirer.com: All three Inky beat writers believe the Eagles will prevail in Week 11. Here's a snippet of how Jeff McLane is feeling:

This game is unique because it’s the first one that the Eagles will play coming off a loss. So there’s a bit of unknown in how this group will respond. But an undefeated season was always unlikely, and the same could probably be said of a one- or two-loss season. This team is good. The offense is very good. The defense is better than people in this town give it credit for being. Special teams remain a concern. But if the Eagles play like they did in their larger majority of wins, and even if they play like they did in their lone loss — without a few improbable moments — they should handle this Colts squad. [The Inquirer]

• The Athletic: The Colts won but did so against a hapless Raiders team. Vic Tafur isn't impressed. He's going Eagles.

Jeff Saturday is a genius! Colts owner Jim Irsay took a victory lap after his buddy beat the Raiders on Sunday, and the public has bought in as this line has already moved down three points. And while Saturday seems to have solved their offensive line problems overnight — the Colts averaged a season-best 4.27 yards before contact per carry and allowed pressure on a season-low 13.3 percent of dropbacks — can we point out one small detail?

They beat the Raiders, a team that was somehow shut out by the Saints three weeks ago and is 2-7. The Raiders defense has the fewest number of sacks in the NFL and their secondary is helpless. The Eagles are one of the best teams in the league, and they’re stout in the trenches with playmakers at cornerback. They wouldn’t let Matt Ryan rip off a 39-yard jog, and also will be clear-eyed and mad coming off their first loss.

• Gregg Rosenthal, NFL.com: The Eagles' run defense is a problem, but they are also not the Las Vegas Raiders. So Rosenthal is also going Eagles, 27-13 (with help from his son).

The Eagles’ struggling run defense is a problem, especially with the upcoming schedule. That could include this game, seeing how Jonathan Taylor showed more juice last week than he had all season and the fighting Jeff Saturdays played well up front. Unfortunately, the Eagles are not the Raiders. Philadelphia’s run defense hasn’t been completely exposed partly because they’ve so often played from ahead, which should be the case for most of this game. (My son, Walker, made this pick, so don’t give me the credit when it’s exactly right.). [NFL.com]

• Pete Prisco, CBS Sports: Prisco is feeling a Birds bounce back, but it's going to be a close one.

The Eagles are coming off their first loss, while the Colts are coming off an impressive victory in Jeff Saturday's first game as interim coach. They looked better by going to Matt Ryan again at quarterback. The Eagles have run-defense issues, which could show up with Jonathan Taylor having a big day. I think the Eagles will get back on track and win this one, but it's close.

• Sheil Kapadia, The Ringer: The Eagles are banged up and without Dallas Goedert now. But they still have A.J. Brown and DeVonta Smith to throw to, and the Colts won... but they beat the Raiders. Kapadia is going Eagles too.

As for the Eagles, they are coming off a loss to Washington where they turned the ball over four times. Tight end Dallas Goedert had been playing at an All-Pro level, and now he’s injured. Through 10 weeks, among tight ends, Goedert is:

- First in yards per reception

- First in yards after the catch

- Third in yards per route run

- He has also been one of the NFL’s best blocking tight ends.

But the Eagles still have A.J. Brown and DeVonta Smith on the outside. Defensively, their ability to stop the run will be tested in this game, but the Eagles have favorable matchups up front.

Reich has been a friend and mentor to Nick Sirianni. The Eagles win big, and Sirianni throws on a University of Maryland Reich jersey to pay homage to his guy.

ProFootballTalk: Week 10 was surprising between the Eagles' first loss and the Colts' first win under Saturday. But the PFT doesn't see any surprises happening this week. Eagles take it.

Florio’s take: Jeff Saturday will quickly realize these aren’t the Raiders. That said, Indy has enough to cover the seven-point spread.

• Bill Bender, The Sporting News: Bender sees a run-heavy strategy with Taylor working for the Colts, but only for so long. The Eagles' talent will eventually pull away.

If Colts interim coach Jeff Saturday knocks the Eagles off, then will he be voted Coach of the Year? Jonathan Taylor resurfaced with 147 yards and a TD in Week 10, and that's the recipe Saturday is going to ride with Philadelphia coming off a short week. It will work into the second half, but the Eagles get back on track after Monday's loss to Washington. Jalen Hurts hits A.J. Brown with the game-winning touchdown in the final minute.