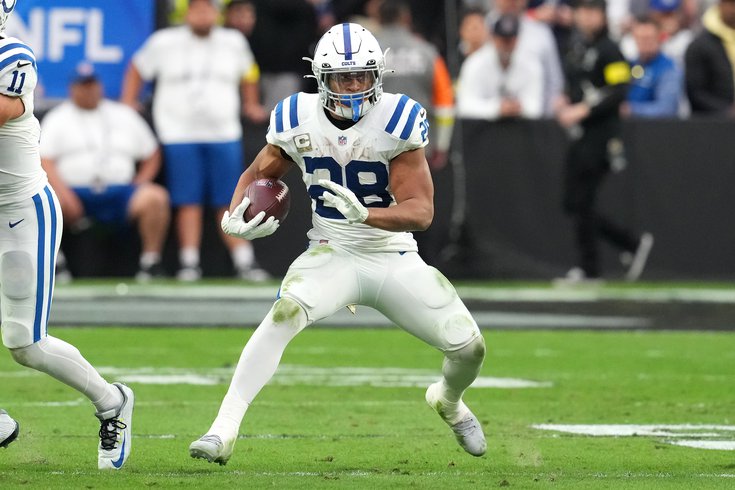 The Philadelphia Eagles will play a road game on short rest for the third time this season as they'll head to Indianapolis to take on the Colts this Sunday. Normally a short rest road game is not ideal, but the Birds probably won't mind so much this week as they'll be looking to flush their performance against the Washington Commanders as soon as possible.

Taylor was the No. 1 overall pick in many of your fantasy football drafts. If you were the one who took him, you've probably been disappointed, as he has rushed 129 times for 609 yards (4.7 YPC) and 2 TDs this season. While those are still decent stats for your typical running back, they fall well short of Taylor's incredible 2021 season, when he ran 332 times for 1,811 yards (5.5 YPC) and 18 TDs, while also adding 40 receptions for 360 yards and 2 TDs through the air.

Here's a highlight reel from 2021. Taylor is a complete back, with vision, power, quickness, long speed, and receiving ability.

Yeah, so, he was a beast. In 2022, Taylor has battled some injuries, and obviously the Colts as an organization have been a hot mess, which has no doubt affected Taylor's production. However, he looked a lot like "2021 Jonathan Taylor" last Sunday against the Raiders:

Knowing full well that they were not as talented as the Eagles, the Texans and Commanders implemented run-heavy offensive game plans in an attempt the shorten the game. That approach worked for both teams, as the Texans were at least able to hang around into the fourth quarter, while the Commanders, you know, beat them.

Spoiler: The Colts will realize that they too are not as talented overall as the Eagles, and they are extremely likely to pound the run as well.

The Eagles held the Commanders to 3.1 yards per carry, which looks great on paper. Unfortunately, they allowed Washington to stay on schedule and could not get them off the field on short 3rd down conversions. If opposing offenses are going to continue to play this way against the Eagles, Jonathan Gannon has to find ways to produce negative plays in the run game to set up long downs and distances, where the Eagles can pin their ears back and get after the quarterback.

Rushing the passer is often a privilege that only comes after you've stopped the run, and for now, the Eagles have to prove that they can do that before they have the opportunity to get after Matt Ryan. If they can put the Colts in obvious passing situations, they should have advantages against this Colts offensive line, which looks like so:

Nelson is celebrated as if he's basically a human steamroller, while Kelly and Smith are solid vets. The two players the Eagles can potentially exploit are Raimann and Fries.

Raimann is rookie. He was a foreign exchange student from Austria who played wide receiver in high school, and enrolled at Central Michigan as a tight end. He has a fun backstory, as chronicled by Dane Brugler of The Athletic. In his first two collegiate seasons, he had 20 catches for 164 yards. Prior to his junior season, he moved to left tackle, basically because Central Michigan didn't have one. He flourished in that role, and was selected in the third round of the 2022 NFL Draft.

The Eagles have gotten nothing out of Robert Quinn through the first three games. Perhaps this is a game that the old vet can take advantage of a player in Raimann who hasn't logged many hours as an offensive lineman?

At RG, Fries was a 2021 seventh-round pick out of Penn State who has appeared in 12 NFL games, with two starts. He should be an obvious player of concern for the Colts.

But again, let's see the Eagles' front shut down the run first.

3) The Eagles' rushing attack vs. the Colts' run defense

The Colts do a nice job of stopping the run, as they're ranked second in the NFL in opposing yards per carry (3.8), even with star LB Shaquille Leonard having only played 74 snaps this season. DT Grover Stewart, DT DeForest Buckner, and LB Bobby Okereke are all good run defenders, and the Colts also employ a pair of physical corners in Stephon Gilmore and Kenny Moore.

The Eagles allowed the Commanders to rack up over 40 minutes in time of possession last Monday night. On Wednesday, Fletcher Cox said he "feels like shit" after having to play 70 snaps in that game.

Fletcher Cox was asked about playing 70 snaps vs. Washington, the most he's played in four seasons, and how he felt two days later:

"You want the truth? I feel like shit. It ain't a good feeling, but you do what you need to do to win the game. Seventy snaps in 70 snaps." https://t.co/xWWIqyDifD

One might assume other Eagles defenders also don't feel great. As such, the Eagles could seek to control the ball offensively to help out the defense on a short week of rest. They'll need an effective run game if that's part of the plan.

Ngakoue is a flawed player who has been traded three times in his career, but there's no question that he can be impactful, particularly with his speed around the edge. Mailata is brick wall who gives up very little ground against power rushers, but speed guys have been able to take advantage of him at times this season.

In the Eagles' matchup against the Raiders last season, Ngakoue gave Mailata fits with his speed.

Similarly, I think DeForest Buckner's quickness could pose problems for Landon Dickerson on the interior. Nick Sirianni and Shane Steichen would be smart to give Mailata and Dickerson some help on the left side of the line. With Dallas Goedert out, I would expect to see Jack Stoll staying in to block on that side quite a bit.

5) The Eagles' wide receivers' vs. the Colts' corners

While not the Defensive Player of the Year level player he once was, Stephon Gilmore is the Colts' best corner and he is having a good season. I imagine A.J. Brown will see a lot of Gilmore. The Colts defensive back who has struggled this season is Kenny Moore, who is allowing 8.4 yards per target and a passer rating of 108.7, per ProFootballReference.

Because (a) the Colts have a good run defense, and (b) the Eagles will be without Goedert, it's going to be on A.J. Brown, DeVonta Smith, Quez Watkins, and Zach Pascal to make plays. The Eagles' receivers have (rightfully) been praised for their play, but this is probably the first game this season that it is imperative that they play well due to injuries and less favorable matchups elsewhere.