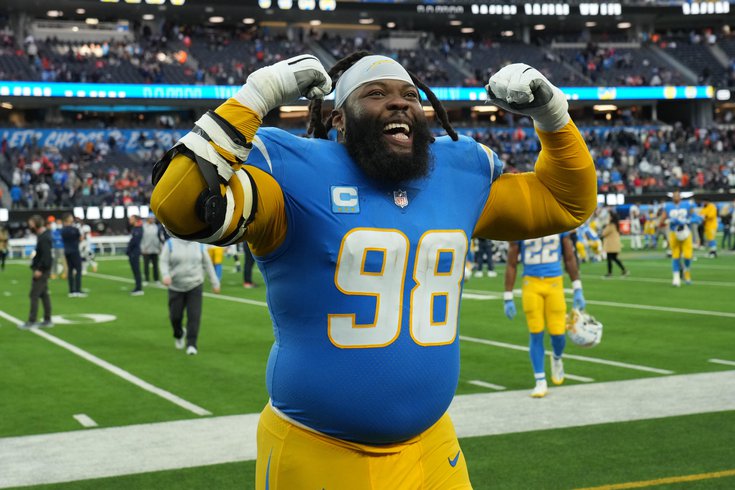 Linval Joseph is a large human being.

The Philadelphia Eagles suffered a number of injuries against the Washington Commanders on Monday night, and as a result they have made a flurry of roster moves.

It was reported on Tuesday that Goedert is going to miss a significant amount of time. It was expected that he would land on IR.

TE Tyree Jackson was activated from the PUP list

Entering 2021 training camp, Jackson was thought of as an intriguing developmental player who was transitioning from quarterback to tight end. At 6'7, 249 pounds, Jackson has excellent size for the position, and athleticism to go along it with. However, being new to the position, it was expected that progress would come along slowly.

Jackson exceeded expectations, making several nice plays each day throughout camp, while showing surprisingly good hands and continuously improved route running, to the point where he was looking like a lock to make the team. Unfortunately, Jackson injured his back (an 8-10 week injury) during joint practices against the Patriots, causing him to miss eight regular season games. In the Eagles' meaningless Week 18 game against Dallas, Jackson caught his first career TD pass, but he also tore an ACL later in that game.

Jack Stoll is likely to see the most time among the Eagles' backup tight ends with Goedert out, and Jackson will likely be eased back into some kind of role slowly.

This was a surprise injury, and it comes at a time when the Eagles are already thin along the interior of their defensive line with Jordan Davis already on IR. Tuipulotu has 16 tackles, a sack, and a fumble recovery in a rotational role this season.

Joseph is 34 years old, and this is his 13th year in the NFL. His role is clear. He is 6'4, 329-pound run stuffer who will serve in that role while Davis and Tuipulotu are out.

Report from Mike Garafolo of NFL Network. (The Eagles have not yet announced this move.)

Robinson is currently on IR. The Eagles signed him off the Vikings' practice squad earlier this season. He has not yet played an NFL regular season snap in two seasons.

The Eagles signed S Marquise Blair to the practice squad

This is Blair's fourth NFL season. He has appeared in 25 career games, with three starts. 50 career tackles, three forced fumbles.

They release WR Auden Tate from the practice squad

They had to make room for Blair.