Eagles-Colts: A look at the odds

The Eagles are coming off their first loss, but are still favored against the Colts by 6.5 points. 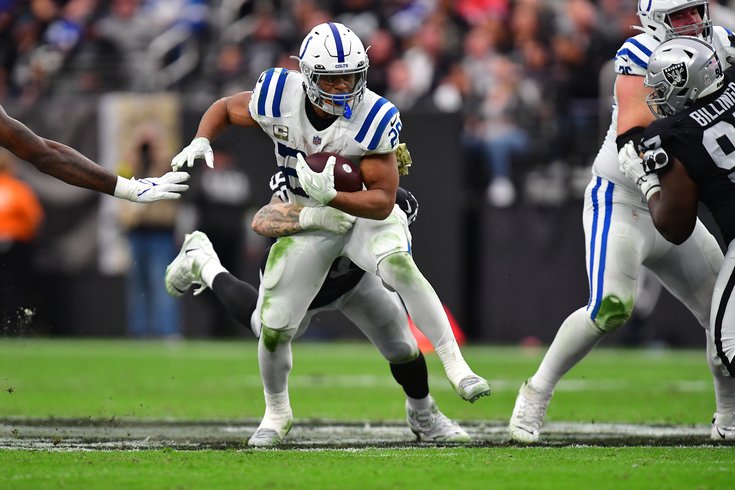 Will the Eagles be able to lock down Jonathan Taylor and the Colts?

The Eagles fell to the Washington Commanders, who executed a long, methodical, clock-draining gameplan to near perfection on Monday night, 32-21.

Washington didn't use the run as a means of domination, but as a means of control, owning the snap count and time of possession to complete a blueprint for beating the Eagles that Dameon Pierce and the Houston Texans got started the week prior.

Now it's on the Eagles to adjust fast and render that strategy null and void. They'll look to do so against the Indianapolis Colts on the road, a team that boasts last season's leading rusher Jonathan Taylor – even if he isn't on the same full-throttle, 1,800-yard pace from a year ago – and a group on an emotional high after beating Josh McDaniels, who spurned them as their head coach several years ago, and his Las Vegas Raiders in the first game under interim coach Jeff Saturday.

Which team steps up?

Going in, the Eagles, as they've been for nearly every game this season, are the favorites. But they're not favored by double-digits as they have in the past few weeks. Across several sportsbooks, it's a much more conservative line now at -6.5.

As a straight-up pick, it's been hard to go against the Eagles all season. One way or another, they've always managed to find a way during their franchise-best 8-0 start, and go back just two days ago and it was an honest argument over whether anyone left on the schedule would actually beat the Eagles.

But Washington figured something out. Their run game, led by Brian Robinson Jr., kept things in check and the Eagles' defense out on the field for way too long.

There was little response to it, and after Monday night, both the players and the coaches knew this will be how teams are going to play them the rest of the way.

"That's gonna happen for sure," defensive end Brandon Graham said postgame Monday. "Until we stop it."

"We're gonna see that again, and so we'll work like crazy to get it fixed," head coach Nick Sirianni added. "We understand that that will be the narrative of how to beat us. We got to own that. We gotta fix it, and we will."

The Eagles are still atop the NFC East, and the NFC as a whole, but things are getting closer now as the full playoff picture begins to take form. The Vikings are right there with them now at 8-1, though the Eagles do own the tiebreaker for the No. 1 seed if it comes to that. In the division race, the Giants have kept pace at 7-2 and the Cowboys, with Dak Prescott back under center, are staying afloat at 6-3.