What they're saying about the Eagles: The day after defeat 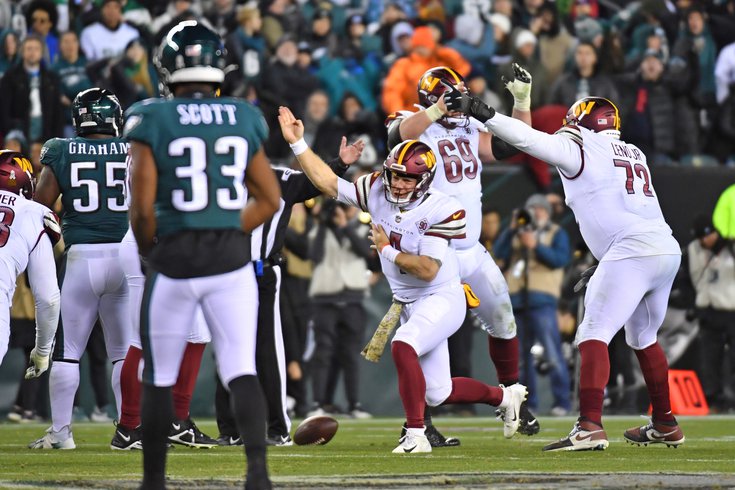 Commanders QB Taylor Heinicke signals for the first down after an unnecessary roughness call on Eagles DE Brandon Graham moved the chains late in the fourth quarter Monday night.

The Eagles lost a football game on Monday night, something they haven't done in 10 months.

And you could tell it's been that long from the immediate reaction.

If you were watching from home, the postgame show on NBC Sports Philadelphia felt the angriest it's been a long time, and one look at Twitter...actually scratch that last thought, Twitter's always been crazy, and on the verge of total implosion now (thanks, Elon).

Anyway, the Eagles are 8-1 now. The undefeated run to start the season is over and it was ended by a divisional foe that the Birds were double-digit favorites against after completely running over them back in Week 3.

There are numerous reasons why. The Commanders had a deliberate, time-consuming gameplan that they ran to near perfection, the Eagles' defense struggled to do anything about it, especially on third down, and a few missed opportunities on offense, along with some costly turnovers, penalties, and a missed facemask call that now has Dallas Goedert injured all factored in.

And when there are multiple reasons for a defeat, that means there are many things to talk about.

So here's a bit of what they're saying about the Eagles the day after falling to 8-1...

Yeah, so in case you missed it, here are 11 minutes of the Postgame Live crew going off.

It's just one loss, but it's one where the Eagles still had a chance to win despite how south things were going. That's probably where the added frustration lies.

What about after there's been a night to process?

It's safe to assume no one had the Eagles going 17-0. There are definitely issues to address, and the race for the top seed in the NFC is a lot tighter now with the Vikings right there with them.

But no one in the Eagles' locker room seemed to stress over it postgame and the likelihood is that, in the long run, the team will be fine.

Sober reflection is what’s called for now that the party is over. Led by their head coach and quarterback, the Eagles were not performatively upset following their first loss of the season. Stuff happens in the NFL, especially in division games. If anything, Monday night’s loss allows the team to discard the magical thinking that luck had nothing to do with their historic turnover differential through the season’s first eight games.

Most likely, the Eagles will be fine. Brown even suggested after the game it will be nice to leave the “17-0” talk behind and focus on the task at hand, which is fighting for a No. 1 seed that all of a sudden has stiffer competition than it did a week ago. To get there, though, the team will have to address its glaring flaw. Washington ran the ball 49 times for 152 yards Monday night. That’s an underwhelming 3.1 yards per clip, but it allowed the visitors to control the game, limit possessions and keep the Eagles’ offense off the field. [The Athletic]

Another odd note about the Eagles' loss Monday night was that a lot of their biggest offensive weapons were quiet.

Part of that, obviously, was because the Eagles didn't have the ball for all that long. But take their top receiver in A.J. Brown, for example. After torching Pittsburgh's secondary three weeks ago, Brown was held to just a catch for seven yards after coming up limp in the first quarter against Washington.

He isn't about to let it stand though, per NJ.com's Kevin Manahan:

Still, as he stood at his locker in the belly of Lincoln Financial Field, the $100 Million Man promised that on Sunday in Indianapolis, he’d return to being — hands down — the 8-1 Eagles’ most lethal offensive weapon. Those unbeaten Miami Dolphins of yesteryear? They’re more like Miami Monkeys — and Brown was (kind of) glad to get them off his back. Now it’s back to playing football without the ghosts from the record book stalking them in every meeting, practice, walk-through and game.

“I don’t want to make any excuses,” Brown said. “They played better than us. That happens sometimes. It’s all about how you respond. I know there are some guys with long faces, but me, personally, of course I want to win, but now all of that 17-0 (crap) is over with. It’s time to wake up.

About that one call at the end

There was a list of other mistakes that brought the Eagles to the moment in the first place, but with less than two minutes remaining in the fourth and the Commanders trying to run out as much clock as they could, quarterback Taylor Heinicke scrambled for a bit on third down and took a knee.

Haason Reddick officially downed him, but Brandon Graham had already turned the corner full speed and didn't see that, making contact with Heinicke as he was getting up. The flag flew for unnecessary roughness, the Commanders got a fresh set of downs to drain more of the clock, and that effectively ended the game.

What did you think about the officiating in the second half tonight? pic.twitter.com/VVoTkrzwbZ

It was a brutal way to end it.

Graham, 34, took full ownership of the mistake but the call will be fodder for sports talk radio over the next week. Graham said he didn’t hear a whistle and was just hustling to touch the QB down, but repeatedly raised his hand to take the blame.

That doesn’t mean that the Eagles necessarily agreed with the call.

“BG is a tough, hard, rugged player. He’s always going 1,000 miles per hour to the ball,” linebacker Kyzir White said. “I don’t know what you expect him to do when [Heinicke is] on the ground, nobody touched him. He looks like he’s about to get up. It’s like he was trying to bait our guys into that. Bad call in my opinion, but that’s why I’m not a ref.” [NBCSP]

And just for the full context, the ref's stance on the call via Zangaro:

After the game, referee Alex Kemp had a chance to explain the call to pool reporter Zach Berman of The Athletic.

“That was my call,” Kemp said. “I had ruled the quarterback had clearly given himself up. Therefore, he is down and a defenseless player. The contact by Philadelphia No. 55 was not only late but also to the head and neck area.” [NBCSP]

Tough spot in a game that was already full of them.

But it's over with now. On to Indianapolis.