There's a book on the Eagles now and their upcoming schedule does not match up well with it. 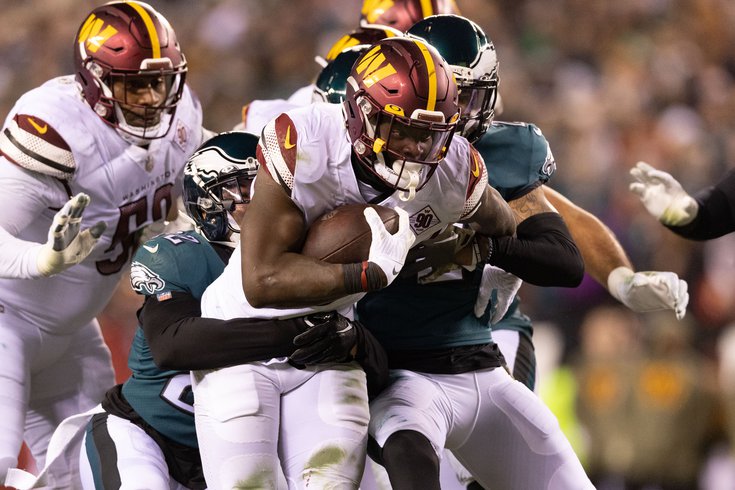 Commanders RB Brian Robinson Jr. trucks forward with the ball during the first half against the Eagles Monday night at the Linc.

The cracks showed 10 days before down in Houston.

The Eagles got the win, but the defense had little answer for the run. Star rookie Dameon Pierce ran all over them for 139 yards, which was a big reason why a matchup against a struggling Texans team looked way closer than it probably should've been.

On Monday night, Washington's ground game had them on the ropes.

Late in the first half, rookie Brian Robinson Jr. refused to be taken down. He trucked forward on three straight rushes of 11, 2, and then 1 yard to the end zone to give the Commanders a lead they would never relinquish.

He ran for 86 yards total, and Washington as a whole racked up 152, dominating the snap count and time of possession (40:24 to 19:36) in the process. The Eagles' defensive front, which should be good on paper, got pushed around left and right, and never did much about it.

Brian Robinson would not be denied! @BrianR_4 | #HTTC

The Eagles lost for the first time this season, 32-21, and for more reasons than just struggling to stop the run – costly flags and turnovers, and the secondary didn't do so hot either – but look at their opponents over the next few weeks: Indianapolis with Jonathan Taylor, Green Bay with Aaron Jones, Tennessee with Derrick Henry, and then the Giants with Saquon Barkley.

Then take a wild guess of where they're all going to focus their gameplan after seeing Monday night.

"That's gonna happen for sure," defensive end Brandon Graham said postgame. "Until we stop it."

It'd be dumb for opponents not to until the Eagles do.

Pierce and the Texans put the theory out there.

Robinson, Antonio Gibson – who also ran for 44 yards and a score – and a suddenly resurgent Commanders group proved it will work, at least as far as Monday night goes. They didn't use the run as a means to dominate, but to control. Washington ran 81 plays compared to the Eagles' 47 and owned time of possession by a whopping margin, 40:24-19:36.

Can't score if you don't have the ball.

And if you want to go all the way back to Week 1 in Detroit, maybe that 144-yard performance from D'Andre Swift and all the sloppy tackling throughout the day couldn't have been chalked up to just rust.

The Eagles are 8-1 now. They're still at the top of the NFL, but there's a book on them, a point of weakness.

Fletcher Cox, who had a brutal night in the trenches especially, has been showing his age. Javon Hargrave, while recording 13 tackles (four solo) and a sack Monday night, has never specialized as a run stopper. And while his first-year stats weren't overly impressive before he went down with a high-ankle sprain against Pittsburgh, the Eagles do seem to be missing the run-swallowing presence Jordan Davis brought to the inside at nose tackle.

Reserves Milton Williams and Marlon Tuipulotu just haven't been able to make up for that, and now, all of a sudden, the Eagles' upcoming schedule doesn't match up all too well with these issues.

"We're gonna see that again, and so we'll work like crazy to get it fixed," head coach Nick Sirianni said postgame. "We understand that that will be the narrative of how to beat us. We got to own that. We gotta fix it, and we will."

But he and defensive coordinator Jonathan Gannon are going to have their work cut out for them.

Going into Monday night, the Eagles' defense was allowing an average of 121.4 rushing yards per game, which at 13th in the league, is just below middling. But for a team that has historically prided itself on the war in the trenches, that's a bit concerning.

Granted, this is also a team that has kept pretty well committed to a "one game at a time" mentality and has cleaned up their act fast after struggles in the recent past, just never after a loss.

The Eagles will probably tell you that's a big part of why they had gotten off to a franchise-best 8-0 start, and why they'll all immediately downplay it in the next sentence.

And now it'll likely be a big part of how they rebound from the lowest point of their season so far and how they'll manage a boss rush of the NFL's best running backs.

"I'm only worried about Jonathan Taylor at this point," Sirianni said.