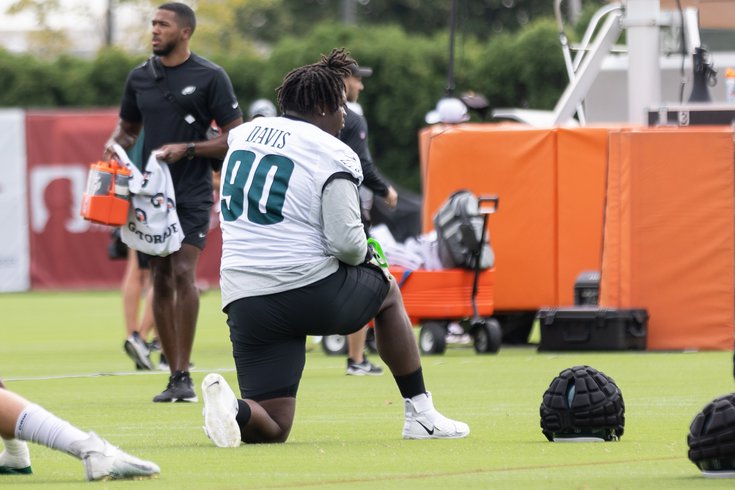 There were zero Philadelphia Eagles players listed with an injury designation heading into their Week 8 matchup against the Pittsburgh Steelers, but the Birds may have suffered a serious injury to rookie defensive tackle Jordan Davis.

Davis was injured during the second quarter. Nick Sirianni and a handful of players gathered around Davis while he was on the Lincoln Financial Field turf. He was eventually helped off the field, and was attended to in a sideline medical tent. While Davis was in the tent, a trainer emerged with his right cleat in hand.

A cart eventually came to pick up Davis from the tent, and he was unable to put any weight on his right leg.

Davis doesn't have eye-popping stats to start the season (12 tackles, 1 batted pass in 6 games), but he has been effective clogging up holes in the run game, playing almost solely in odd-man fronts as a nose tackle.

Against the Steelers, he started seeing more action in even-man fronts, aligning as a three-technique.

We will update as we learn more.

Update: The Eagles have ruled Davis out for the rest of the game. They categorized it as an ankle injury.

Update No. 2: The initial reporting on Davis' injury indicates that the Eagles and Davis dodged a bullet:

#Eagles first-round DT Jordan Davis is believed to have suffered a high-ankle sprain based on the initial exam, source said. Those are generally 4-6 week injuries, but he’ll have an MRI to determine his time frame.