Three pivotal plays in the Eagles' loss to the Commanders 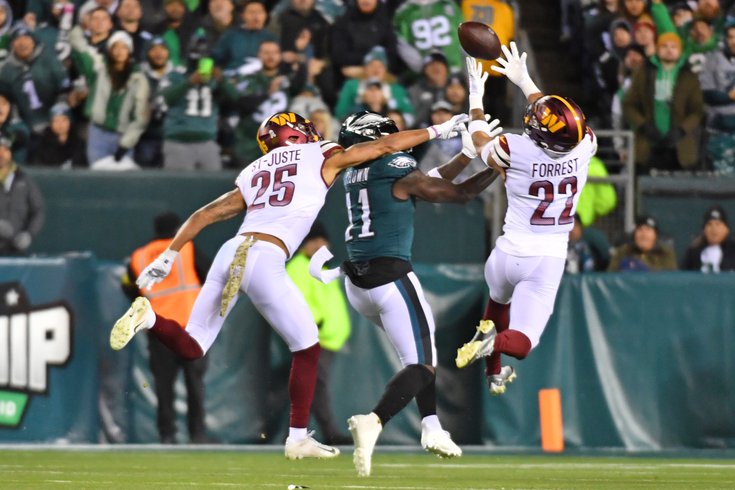 Commanders safety Darrick Forest (22) intercepts a pass intended for Eagles WR A.J. Brown during the first half Monday night at the Linc.

Well, due to the Eagles-Phillies madness two Thursdays ago, I didn't do a pivotal plays story for the Birds' win over the Texans. I return now, unfortunately for Eagles fans, writing about my first ever loss for this feature. I think those same fans would take 8-1 through 10 weeks if it was offered to them before the season, so it could always be worse, Philadelphia.

Let's look at the three most pivotal plays that gave the Commanders the 32-21 win...

The Eagles traded for A.J. Brown because of how dynamic of a playmaker he is. The team's offense has made great use of Brown's multifaceted skillset so far this year, throwing up the ball and allowing their star wideout to get it done. Those 50/50 balls haven't quite been split this year, with them overwhelmingly going in the Birds' favor, but this wasn't one of those:

The narrative in the immediate aftermath of the play was that Hurts didn't need to force a ball deep into double coverage. If you're going to do that type of play, throwing the ball 50 yards down field is fine with me, so I wasn't sweating that.

The ball, however, was on the mark from Hurts. It actually slipped through Brown's hands:

Weird play. I've looked at different angles and watched the video again and again. I don't know how he didn't come down with it.

Washington's offense responded with a methodical, 16-play, 86-yard drive to give the Commanders a 17-14 lead they would never relinquish.

To be succinct, it was just one of those games for the Eagles, the type of a loss that felt like a relic in the face of this unreal 8-0 start.

Mercury Morris and the 1972 Dolphins be damned. No one's perfect.

The play that is enraging the entirety of the Delaware Valley and will continue to do so until Sunday.

The Eagles had some juice after a third down QB sneak conversion, needing just a field goal to re-take the lead over Washington. The Birds dialed up a screen for tight end Dallas Goedert, a play that's worked time and time again for them in 2022.

Perhaps it could've turned into a minor gain, but Goedert's head was essentially ripped off with a blatant face mask call that no referee thought to throw a flag on. As Goedert's head swung in a 360-degree motion on a tight grip from Washington defender Jamin Davis, the Commanders' John Ridegeway popped the ball out. Davis recovered.

No call. Washington ball. If there was a roof at Lincoln Financial Field, it would've gotten blown off with the "REF, YOU SUCK" chants spewing.

Just look at this:

The Eagles might be due for a makeup call or seven next week.

The story of the game! Something electric was about to happen and a turnover stymied the Eagles' pursuit of victory. Hurts let that ball fly downfield to a streaking Quez Watkins. The stadium went bonkers. The Birds were coming back! Watkins rolled to the ground untouched after the catch and popped back up to gain some YAC. In doing so, however, the Commanders' Benjamin St-Juste stripped him:

.@Benj_Juice forces the fumble and the @Commanders recover!

The feeling was that the Birds were going to pull a rabbit out of their asses, steal a win at home and continue with an unblemished record at 9-0. Not meant to be.

Eagles fans, again, will assuredly take 8-1, but what a deflating way to finally have one up in the loss column.