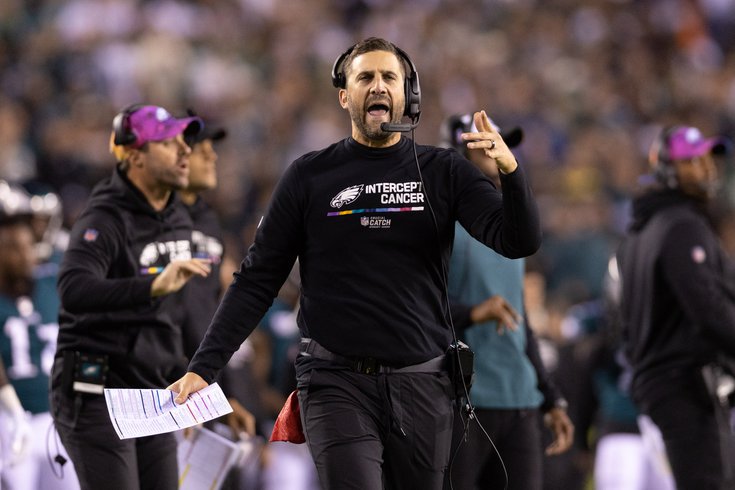 For the gambling enthusiasts, here are my Week 11 NFL picks. To note, the team logos indicate who I think will win the game, not cover the spread. At the end of the picks, I'll note a few teams that I like based on the spread.

Titans at Packers (-3.5): I get that the Packers beat the Cowboys in impressive fashion on Sunday, but the Titans have won six of seven, while the Packers have lost five of six. The Titans are a grimy, pain-in-the-ass team of grinders that tend to play (and win) a lot of close games. Their defense hasn't allowed more than 24 points in a game since Week 2, and they have held each of their last six opponents to 17 or fewer points in regulation. I'll gladly take Tennessee and the points.

Eagles (-6.5) at Colts: At first glance, the Colts might look like a team ripe for a smashing considering owner Jim Irsay fired head coach Frank Reich and inserted in "drinking buddy" Jeff Saturday. But this is not a bad team. They have their fair share of things going for them.

While I think the Eagles will bounce back from their frustrating loss to the Commanders Monday night and win this game, I also think it could be a struggle. Beware that 6.5-point line, which might look good on paper. Birds in a tight one.

Bears at Falcons (-3.5): The Bears and Falcons are going nowhere this season, so give me the team with the flawed-but-exciting quarterback.

Browns at Bills (-8): It looked for a while like the Bills were going to cruise to a home win over the Vikings last Sunday, and then, well, a bunch of stuff happened. I do think there's some valid concern about the Bills' ability to stop Nick Chubb and the gang on the ground, but this is very bad Browns team otherwise that the Bills should handle.

Lions at Giants (-3): If we're operating under the rule of thumb that Vegas awards three points to the home team, then oddsmakers believe that the 7-2 Giants are equal to the 3-6 Lions.

I do think there's some upset potential in this game, as the Lions are coming off consecutive wins, while the Giants needed a bunch of huge breaks to beat the awful Texans at home last Sunday. Still, for now I'll play it safe and take the Giants.

Commanders (-3) at Texans: The Texans are the worst team in the NFL, in my opinion. They'll have trouble blocking the Commanders' defensive front, as well as covering their trio of talented wide receivers.

Remember when the Raiders and Broncos were supposed to challenge the Chiefs for the AFC West?

Cowboys (-1.5) at Vikings: In a somewhat small sample size of four games, Dak Prescott is having the worst numbers of his career in the following statistical categories: INT percentage (3.1%), yards per pass attempt (6.7), yards per completion (10.6), QBR (52.0), and QB rating (85.9). He is having his second-worst numbers in the these categories: completion percentage (63.8%) and passing yards per game (214.0).

The Cowboys' offense is not the potent force it once was, and the defense has given up a combined 447 rushing yards over the last two games. Are we sure this team is really that good that they should be road favorites over an 8-1 team?

Bengals (-3.5) at Steelers: The Steelers' offense hasn't scored more than 20 points in any game this season.

Chiefs (-5.5) at Chargers: The Chargers have been absolutely wrecked by injuries this season, and they'll head into this matchup with four contributing defensive linemen on injured reserve. The Chiefs should be able to control L.A. at the line of scrimmage, making life easier for Patrick Mahomes.

49ers (-8.5) at Cardinals (in Mexico): I actually like the Cardinals' chances in this game better with Colt McCoy than I do with Kyler Murray, but either way the Niners have the far better roster. I do think that 8.5 points is too high of a spread.