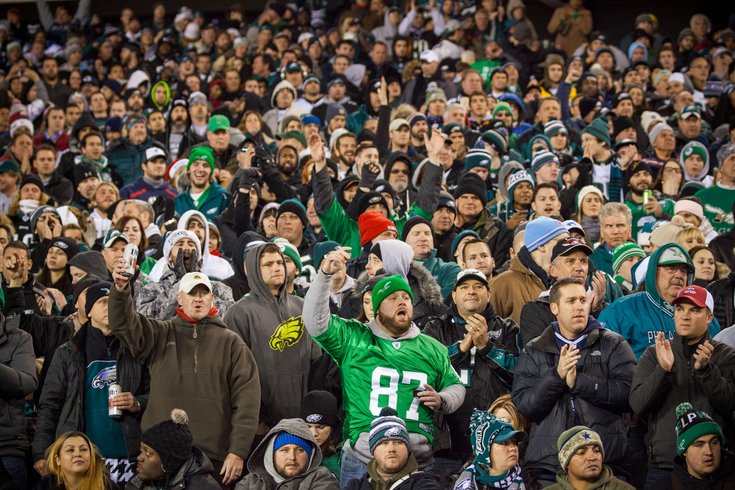 Eagles Fans cheer at the December 14th game versus the Dallas Cowboys.

Considering it's only Week 2, there's a lot at stake at Lincoln Financial Field on Sunday afternoon.

Not only is it Dallas Week here in Philadelphia, but it's also the home opener -- their first against the Cowboys since Week 2 of 1974, a a 13-10 Eagles win. With a loss, the Eagles would fall to 0-2 and suddenly find themselves two games out of the NFC East lead. And although it's early in the season, an 0-2 start would be less than ideal for Chip Kelly and his team.

With a win, however, the Eagles would guarantee themselves a tie of the division lead. It would also be their first home win over the Cowboys since Kelly's arrival in Philly following the 2012 season.

Here's what you need to know for when the Eagles take on the Dez Bryant-less Cowboys on Sunday:

Before getting into our predictions -- and because you're likely going to think we're all homers -- it's worth noting that nine out of the 10 writers at The Dallas Morning News picked the Eagles over the Cowboys. And of those nine, eight pick the Eagles to cover.

Meanwhile, over at The Philadelphia Inquirer, both Jeff McLane and Zach Berman picked the Birds to win. And at Bleeding Green Nation, all seven of their writers like the Eagles. Not surprisingly, however, eight of the 10 writers at BGN's Dallas counterpart, Blogging the 'Boys, picked the Cowboys.

Let's just hope our predictions are a little better than they were in Week 1, when Jimmy, Rich and I all incorrectly predicted an Eagles victory...

I'll keep this short and sweet. The Cowboys are missing their best player (Dez Bryant), their best defensive back (Orlando Scandrick), their best pass rusher (Greg Hardy), another dynamic pass rusher (Randy Gregory), their starting middle linebacker (Rolando McClain), and possibly their starting left guard (Ronald Leary). If the Eagles can't take care of business with all those guys out, they're in big trouble.

Although I don’t gamble, the Vegas lines are always of interest to me. They are a major part of my football watching experience, especially when Al Michaels is calling the game (on that note, the opening game of the season was a doozy). So when I see that the Eagles are favored by five points against Dallas as of this writing, it’s a little confusing. The Cowboys are a public team, and the Birds are coming off an up-and-down game on the road in Atlanta.

All that said, I think Vegas is on to something. The Cowboys were lucky to eke out a victory at Jerry World against a lackluster Giants team and now they are without Dez Bryant and Randy Gregory. You surely remember that Dez roasting Bradley Fletcher for three touchdowns at The Linc last December was the reason Jerry Jones and Chris Christie got to celebrate a division title. He is a major loss for Dallas. More than anything, I just think the Eagles need this game more than the Cowboys. Falling into an 0-2 hole would give them very little margin for error, and they played a very strong second half against Atlanta after waking up in the locker room. Week 2 is still very hard to predict, but I think the Eagles find a way to put together four good quarters.

The Cowboys may be 1-0, but I'm not buying them a legit contender this season. Not yet at least. In Week 1, they needed a total collapse by the Giants AND a little extra help from the refs to get the win. But in the process, they lost Dez Bryant, by far their most dangerous offensive weapon. Couple that with the fact that their top offensive player from a year ago, DeMarco Murray, will be lining up on against them, and they could struggle a bit to score.

The Cowboys still have that great offensive line, and the one matchup I'll be most interested in watching is how the Eagles young, strong defensive front matches up against them, especially after a mediocre (by their standards) showing in Atlanta. They'll certainly look to bounce back in front of the home crowd, but don't be surprised in they don't rack up the sacks. Only 15 of their 49 sacks last season came at the Linc, and Tony Romo seemed to have all the time in the world to throw against the Giants. However, the Eagles did record seven of the 29 sacks against Romo last season, so you never know...

As for the Eagles offense, their slow start last week was not unexpected, and it was nice to see a much more fluid attack in the second half, outscoring Atlanta, 21-6. Murray says he won't be playing with any extra motivation against Dallas, and whether or not that's actually the case, it's safe to assume he'll have more than 9 yards rushing. I also expect another big game from Jordan Matthews, who was clearly Sam Bradford's favorite target on Monday night. In the end, I think the Birds take care of business.